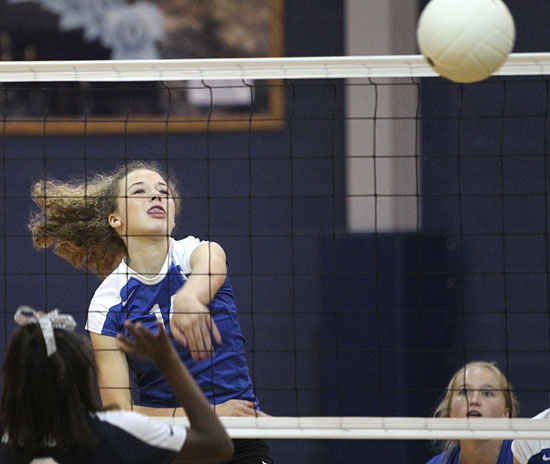 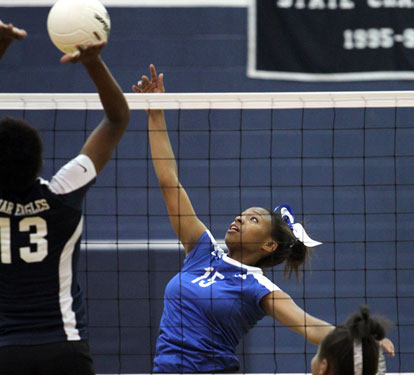 Dejai Kelley sends a hit over the net during Tuesday’s match. (PHoto by Rick Nation)

The Bryant Lady Hornets’ play has been improving but it hasn’t always translated into victory. But, on Tuesday night, the team harvested some results to undergird their work when they blitzed past the Lady War Eagles of J.A. Fair, 25-2, 25-14, 25-8.

“The girls really needed a night like tonight to pick them up after our last two games,” acknowledged Lady Hornets coach Beth Solomon. “We were able to get all of our JV girls in tonight in the varsity game and they all stepped it up.”

“It seems like we’ve been plagued with injuries in the last two weeks,” Solomon noted. “We’ve got four varsity players out right now, two with knee injuries, one shoulder injury, and a concussion. We’re hoping by next week we will have at least a few of them back and ready to play. That being said, we’ve had several girls that have been stepping up and taking charge on the court.”

Sophomore Allie Anderson had a great night at the service line where she was good on all 22 of her serves with a whopping 17 aces. Whitney Brown got in 14 of 15 with five aces. Britney Sahlmann added five aces, Abby Staton, Dejai Kelley and Kaci Squires had two each as the Lady Hornets piled up 35 aces in the game. 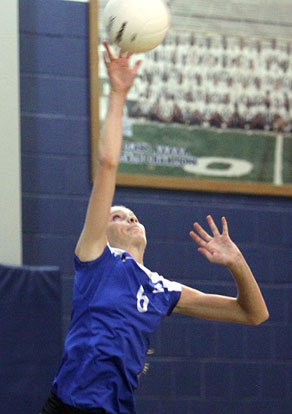 “Sierra Jones had a great night,” Solomon pointed out. “Her swing seems to be getting more consistent.”

The Lady Hornets return to action on Thursday at home against Sheridan. 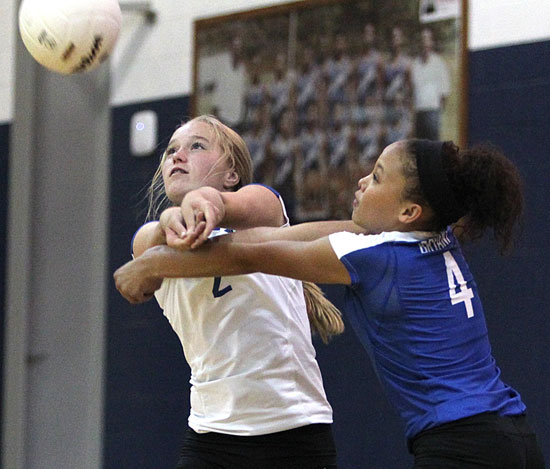