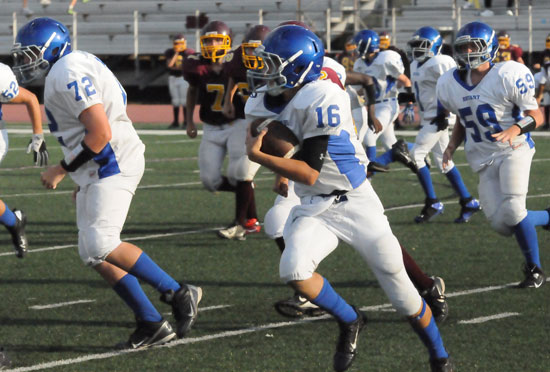 PEARCY — The Bryant White Hornets eighth grade team of Bryant Middle School scored on its first possession and its last Thursday night but, in between, the Lake Hamilton Junior Wolves eighth graders scored on all four of their possessions on the way to a 26-12 victory. 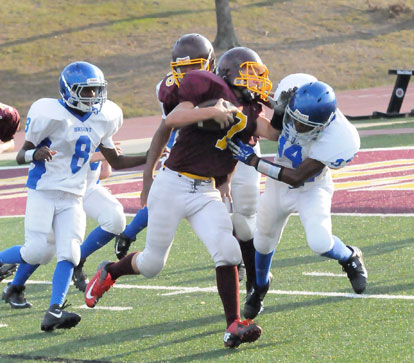 The Hornets just could not deny the Junior Wolves’ power running game and play-action passing.

On offense, Bryant White threatened at the end of the first half and in the middle of the second half but could not finish off the drives that would’ve helped them keep pace.

The Hornets opened the game impressively, driving 66 yards in seven plays to take the lead. Tristan Calhoun completed a 10-yard pass to Brooks Ellis to convert an early third-down situation. He then kept for 13 yards. On the next play, his pass to Mackenzie Martindale broke for 22 yards to set up James Polite’s 5-yard TD run.

Lake Hamilton answered, however, aided by a late hit out of bounds on the kickoff return, which gave them tremendous field position at the Bryant White 41. They covered the distance in nine plays with just one pass, which fell incomplete. Fullback Juan Jackson had the big run of 14 yards and quarterback Utah Aitken converted a third-and-3.

The Bryant White defense forced the Wolves into a third-and-7 at the 8. Running back Dagen Stacks was hit in the backfield but broke the tackles and forged ahead enough for a first down at the 1. Aitken snuck it in from there.

Despite a procedure penalty before the two-point conversion, Lake Hamilton tacked it on with a pass from Aitken to Jacob Spradlin, making it 8-6. 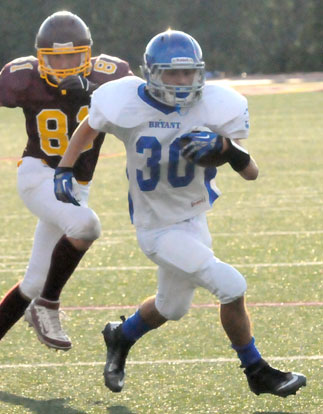 The only punt of the game for either team came on the last play of the first quarter as the Hornets were forced into a three-and-out when a third-down pass from Calhoun to Neal Brenton was stopped for no gain.

A short punt gave Lake Hamilton great field position again, just 44 yards away from paydirt and the Wolves covered most of that with a 28-yard pass from Aitken to Spradlin. The two combined on the touchdown play as well with 3:38 left in the half.

The Hornets foiled the two-point try so they were within 14-6.

And they made a bid to answer with a drive from their own 35 to the Lake Hamilton 34. Polite had runs of 7 and 12 yards then Calhoun kept for 14. But he was sacked on the next play and the Hornets could not overcome the loss. A pass was dropped then a completion to Keshaun Davis left them with a fourth-and-10 at the Wolves’ 34 with less than a minute to play. Calhoun tried to scramble for the first down but was stopped short and the Wolves took over on downs.

To start the second half, Lake Hamilton pounded 65 yards in 12 plays. All of the yardage came on the ground with Stacks scoring from the 2 with 2:14 left in the third quarter.

Again, a two-point try was denied as Bryant’s Grayson Prince forcing Aitken into an incomplete pass.

Trailing by 14, the Hornets went to work on offense. A strong kickoff return by Isiah Ash gave them field position at the Lake Hamilton 42. Polite dashed for 7 yards and, a play later, Calhoun converted a third down with a 7-yard strike to Brenton. 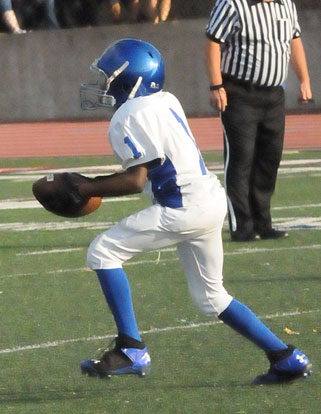 A pair of keepers by the Bryant White quarterback reached the 14 but the drive stalled there. On a fourth-and-6 from the 10, Calhoun dropped back to pass only to find Aitken coming on a safety blitz, throwing him for a loss.

The Wolves put the game away with an answering drive that started with 6:11 left in the game and ended with Stacks’ 9-yard touchdown run with :29.2 showing. It was a 13-play, 84-yard march. The Hornets almost got a break when, on the second play of the series, Stacks fumbled at the Wolves’ 15. But he was able to get back on it.

On the next play, Aitken threw a screen pass to Jackson and it broke for 38 yards to get them out of the hole.

Trailing 26-6, the Hornets got one last play in and it went for a 62-yard touchdown with Calhoun throwing to Davis who made a nice catch in traffic then sprinted down the left sideline for the score.

A try for two failed and so did an onside kick as Lake Hamilton closed out the win. 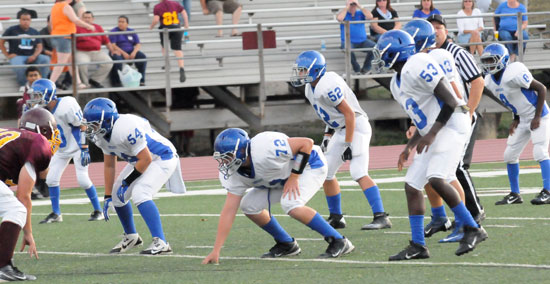