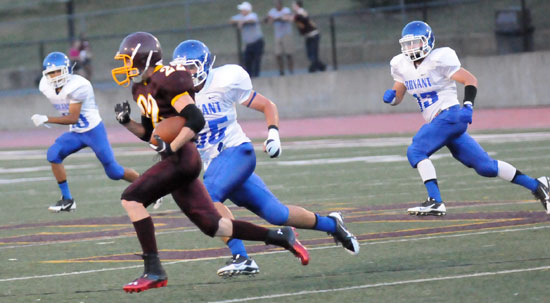 PEARCY — You have to give the Lake Hamilton Wolves freshman team its due. After the Bryant Hornets freshmen had rallied from a 22-7 deficit to forge a tie going into the fourth quarter, they put together a 90-yard scoring march in the fourth quarter. 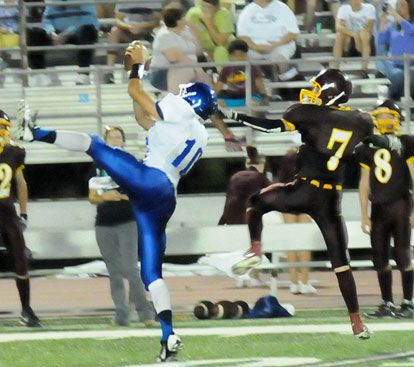 Then, with the Hornets threatening to answer that drive with one of their own, the Junior Wolves got a stop after Bryant had made it to their 42. Phillip Isom-Green grabbed a swing pass from Beaux Bonvillain on a fourth-down play, needing 6 yards to keep the drive alive but the Wolves’ safety/quarterback Andrew Bennett made a shoestring tackle short of the first down.

Lake Hamilton held on for a 28-22 victory in a physical, hard-nosed battle between Central Arkansas Junior High Conference rivals.

The Hornets gave themselves a last chance in the closing seconds by forcing a Lake Hamilton punt. It very nearly didn’t come to that. After taking over on downs, the Wolves were trying to run out the clock when Bennett kept around right end. Bryant’s linebacker DeAmonte Terry made a tremendous play, hitting the quarterback in the backfield while slapping the ball out of his hands.

Though it rolled on the turf for tantalizing seconds, Wolves’ lineman Mantej Singh fell on it.

Lake Hamilton was able to go on to use up all but :29.7 before taking a timeout and punting the ball back to the Hornets.

Bryant got a break when the ball went off the side of the foot of Jacob Graves, who was hurried by the Hornets’ rush. Taking over at their own 44 with :21.4 showing and no timeouts, the Hornets moved it to the 49 of Lake Hamilton with a quick pass from Bonvillain to Austin Kelly. Bonvillain clocked the ball with :04.7 to go, time for one last play.

Sending Kelly deep down the left side with Cameron Coleman trailing, the Hornets’ Hail Mary was nearly answered. Kelly got a hand on the ball near the 15 and deflection was nearly plucked out of the air by Coleman but it was just beyond his reach as the game ended. 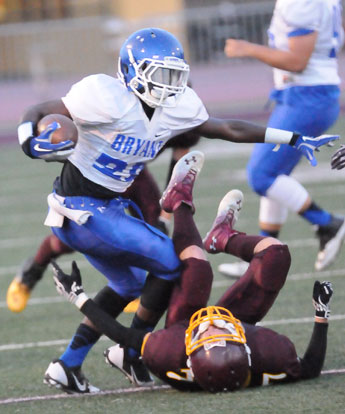 The loss came despite a tremendous effort by Coleman, playing his first game of the season after missing the first two outings with an injury. He scored on two of his first three carries, from 34 yards out and 59 yards out as the Hornets drew within 22-15 going into the half. He would then cap off the first possession of the second half with his third TD that, with Chase Kincaid’s extra point, tied the game 22-22.

Coleman finished with 167 yards on 17 carries and the Hornets out-gained the Wolves, 292 yards to 179. But Lake Hamilton intercepted three passes in the first half, one that set up a score, another that produced a touchdown and another that foiled a Bryant threat at the end of the half.

With stops made by Kelly, Marvin Moody, Terry and LaRae Williams, the Hornets defense stuffed the Wolves on the opening series of the game. In turn, Bryant was driving thanks in large part of a 12-yard completion from Bonvillain to Garrett Misenheimer. Isom-Green slashed for 7 yards into Lake Hamilton territory but, on the next play, Bennett jumped a post route for an interception.

Facing a third-and-9 at the Bryant 46, the Wolves converted with a big play. Bennett found Graves down the middle for 43 yards. Noah Rengstorf scored on the next play. And when Bennett ran in the conversion, it was 8-0.

The Hornets picked up where they left off on offense after Isom-Green’s kickoff return gave them good field position at their own 45. A play after Bonvillain snuck for a first down to convert a fourth-and-1, a high snap cost them yardage but not the ball as Isom-Green recovered. A play later, Bonvillain’s pass was tipped by Bennett over Kelly’s head and into the arms of Ramar Easter who brought it back 60 yards for a touchdown that made it 14-0 going into the second quarter.

Bryant answered this time. Two quick passes to Kelly reached the Wolves’ 34 and, from there, Coleman blasted up the middle and went the distance. Kincaid added the extra point and it was 14-7 with 7:01 left in the half. 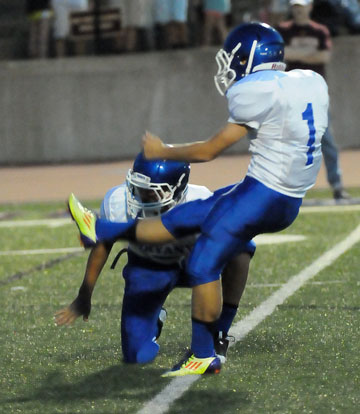 Chase Kincaid (1) kicks an extra point out of the hold of Landon Smith. (Photo by Kevin Nagle)

Aided by a penalty for a horse-collar tackle, Lake Hamilton was soon threatening again. Bennett finished off the 55-yard drive with a zig-zag dash for 17 yards and the touchdown with 3:50 to go in the half. He then threw to Easter for the conversion to make it 22-7.

It didn’t take long for the Hornets to answer this time as Coleman, on the same play, sprinted 59 yards for a touchdown. Running the swinging gate play on the conversion, Landon Smith tossed to Isom-Green who started around right end, drew the defense and tossed a pass over their heads to Kelly who was wide open in the back of the end zone.

Suddenly, the Hornets were back within 7 points and they got a chance to tie it when Kelly intercepted a Bennett throw with 1:52 left in the half. From their own 49, the Hornets drove to the 31 with Coleman dashing 14 yards then Misenheimer catching a pass for 8.

After a timeout with :26.8 showing, a throw down the left sideline sailed and was picked by Jonathan Buss at the 15 to end the half.

But Bryant got the ball to start the second half and promptly marched to the tying score. The 68-yard drive was sparked by Coleman’s 24-yard smash. Bonvillain’s swing pass to Isom-Green broke for 18 but, moments later, the Hornets faced a fourth-and-4 at the Lake Hamilton 27. After a timeout, Bonvillain placed a pass perfectly on the outside shoulder of Kelly, who turned just in time to make the catch for 15 yards and a new set of downs.

Coleman, on three straight carries, covered the necessary yardage, skirting left end from 6 yards out. Kincaid’s kick tied it with 3:19 to play.

And the Wolves were soon punting it back to Bryant after defensive plays by Chase Fox, Terry, Moody and Knowles. The latter duo pressured Bennett into an incompletion.

On the punt, Graves fumbled the snap but the Hornets couldn’t get to him. He got the kick away and Bryant got the ball back at its 30. Coleman slashed for 6 yards then 11. A 4-yard pass from Bonvillain to Isom-Green reached midfield. On a third-and-8, Bonvillain found Jake East down the left seam with single coverage. Obviously interfering to try to prevent a touchdown, the Lake Hamilton defender grabbed East. But, much to the chagrin of the Bryant sideline and the Hornets’ fans, there was no flag.

Kelly came on to punt it away and boomed it. The ball was downed at the 10 only to have Lake Hamilton put together what turned out to be the game-winning drive.

Things don’t get any easier for the Hornets, now 2-1, as they host North Little Rock next Thursday. 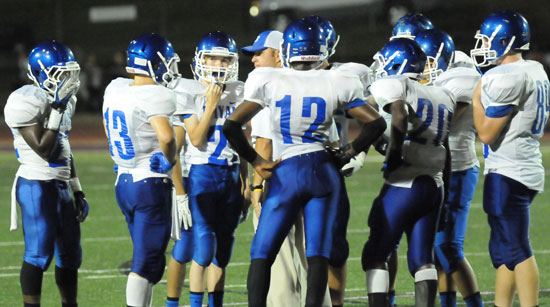