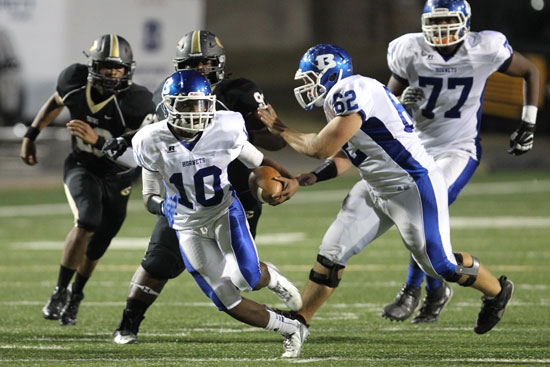 Though the Little Rock Catholic Rockets basically had two different offenses to prepare for going into tonight’s game against the Bryant Hornets, they’ve got it better than the Little Rock Central Tigers who, last week, only prepared for one.

The Tigers were surprised to find the Hornets, without junior quarterback Brandan Warner who started the opener at Conway, sending out senior wide receiver Devonte Howard to play quarterback in an attack that featured his running prowess. Howard led Bryant to a 28-14 win.

Central spent game week preparing for Warner and the somewhat more balanced offense the Hornets had employed before.

All of which means that the Rockets had to spend the week preparing for the Howard-led ground game as well as the Warner-led passing attack. But at least they know about both, unlike Central. Warner’s recovery from the knock on the head he’d received at Conway and the weather will probably determine what Catholic is faced with.

“We’re not trying to define ourselves as one thing or the other,” stated Hornets offensive coordinator Lance Parker. “We know we’re going to need both guys that we’ve got at quarterback to win games. Down the stretch, it’s only going to help us having another package for people to prepare for but, at the same time, we still have to prepare two offenses. So it takes some time away from whatever we’re doing one side or the other.”

The Rockets, with their new head coach John Fogelman who led the revitalization of the Malvern program before taking the job at Catholic, have had their struggles on defense, giving up 38 points to Central in their opener and 40 to Cabot last Friday.

“They’re very big and strong,” Parker said. “They’ve had a couple of tough offenses they’ve faced so we don’t think the scores are necessarily an indication of how good they are on defense. They’ve got some guys going both ways and I think, early in the year, conditioning is a factor. They look like they’ve got some players that can make some plays.

Meanwhile, the Hornets’ defense will be confronted with a returning starter at quarterback, Zach Pinter, a do-it-all back in D.J. Brown, and big tight end Aaron Hamaker.

“They have an experienced quarterback and an outstanding running back in Brown,” said Hornets defensive coordinator Steve Griffith. “They’ve got a big tight end that gives them a dimension in the passing game that makes them difficult to match up with. You have to be aware of Brown. He will move around and be at running back some. He plays all the different receiver spots when they go to their spread formation. So they present a challenge there.

“They’re a zone run football team then they will spread it out — doubles, trips formations — and are very capable of throwing the football around,” he added. “They moved the ball effectively at times against both Central and Cabot with their passing game and then running the football out of their spread look.

“They’ll give us a lot of different looks. We’ve worked hard this week on making sure we make our sight adjustments with the looks we’re getting. Then line up and play football.”

Griffith hopes for continued improvement from his charges, who made strides last week.

“It felt like we played much more aggressive,” he related. “We did make some mistakes and we feel like there are some things that we need to correct but, anytime you’re able to get four turnovers, you’re excited. We recognize that we probably could’ve had a couple more.

“We looked at the film and hopefully we’ve got those mental mistakes corrected so that our alignment is where it needs to be,” the coach concluded, “and that we’re reading our keys as the ball is snapped and that puts us in position to make a play.”

Now 1-1, Bryant White will try to bounce back on Thursday, Sept. 26 against Ridge Road of North Little Rock.