The Bryant Lady Hornets won't face many — if any— pitchers as tough as Lake Hamilton's Kelsie Armstrong this season.

Armstrong, a standout for the Lady Wolves for a couple of years now, whipped up a two-hit shutout, striking out 16, to lead her team to a 4-0 win over the Lady Hornets on Thursday, Feb. 26. 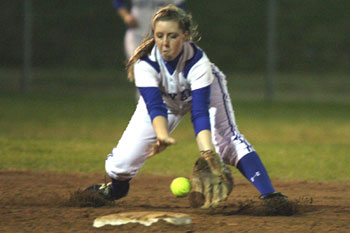 The loss dropped the young Bryant team to 1-2 on the season going into their 7A-Central Conference opener at home against Little Rock Central on Tuesday, March 3.

The Lady Hornets were only able to get four runners on base in the game, all with two outs. In the second, Jessie Taylor made a bid for her second home run in as many games, knocking the ball off the fence in left for a double which was the first Bryant hit. She was stranded.

In the third, Armstrong struck out the first two then Paige Turpin reached base on an error. Turpin swiped second but Armstrong ended the inning with another strikeout.[more]

With two out in the fourth, Christen Kirchner coaxed the only walk that Armstrong issued. But, on a strong throw from Lake Hamilton catcher MaKenzi Drake caught her trying to steal second to end the frame.

The fifth inning saw Armstrong strike out the side for the third time but, with two down, Kim Wilson fought off four two-strike pitches before stroking a single to right-center that was misplayed allowing her to reach second. 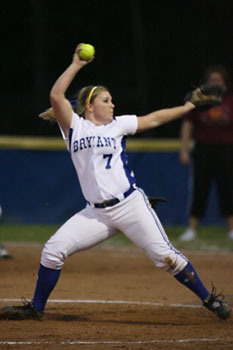 She got no further, however, and Armstrong proceeded to retire the next seven in a row, five on strikes.

Bryant starter Peyton Jenkins worked out of jams in two of the first four innings to keep the game scoreless. In the fifth, however, a one-out walk and an error proved too much to overcome as Melissa Chunn and Drake reached base. Jenkins induced a grounder to second to get the second out on a force play, leaving runners at the corners. But, on the next pitch, Armstrong helped her own cause with a drive off the base of the center field fence, driving in the game's first run.

A wild pitch allowed a second run to score. Jenkins got within a strike of getting out of it there but Hannah Hall drew a walk on a 3-2 pitch. And she got two strikes on the next batter Kelsey Ridgeway before she singled to center, bringing a third run to the plate.

Kirchner relieved at that point and was greeted by a bloop single to left off the bat of Hayley Hill that capped off the scoring.

Lake Hamilton's second-inning threat came with one out. A hit batter and two singles loaded the bases but Jenkins induced a bouncer to Kirchner at short for a force at the plate, then struck out Kalie Adney to end the threat. In the third, Drake led off with a double but catcher Sarah Hart gunned her down when she tried to swipe third to take the sting out of the inning.