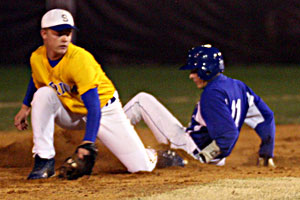 BENTON — When baserunners are as few as they were for the Bryant Hornets and the Sheridan Yellowjackets in their second-round match at the Benton Panther Invitational Tournament on Thursday, Feb. 26, it behooves a team to make the most of what they get.

Sheridan did. Alas, the Hornets did not.

As a result, the Yellowjackets pinned the first loss of the season on Bryant, 3-0, to advance to the championship game against the winner of Friday's (or Saturday's, depending on the weather) other semifinal between Little Rock Catholic and the host team. Bryant was set to play the loser of that contest, after hosting Lake Hamilton in a regular-scheduled game on Friday afternoon at 4:30.

"We just didn't compete at the plate," asserted Hornets coach Kirk Bock. "We didn't compete offensively. We practice that. We just didn't execute the system. And we made some baserunning mistakes and it hurt us. We certainly have things to work on but I am disappointed in not executing.

"We made some blunders defensively that, in a tight game, hurt you too," he added.[more] 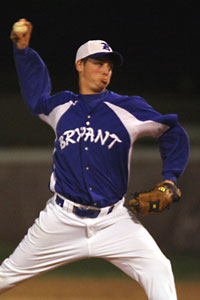 y had more baserunners than Sheridan with five hits, four walks but stranded six and lost three more on the bases. The Jackets had four hits and two walks but only stranded two.

Josh Young got credit with the win, giving way to Tyler Lathan after issuing a lead-off walk to Brady Butler in the top of the seventh. Lathan got the final three outs for the save.

Ben Wells absorbed the loss for the Hornets allowing just three hits — one of them iffy — all in the fourth. Kaleb Jobe finished with two shutout innings of relief.

Wells had, in fact, faced the minimum through three innings thanks to a pickoff of Landon Moore, whom he had walked to start the bottom of the first. In the fourth, however, he issued a second pass to Moore. With Shane Harrington at the plate, a wild pitch sent Moore to second and a passed ball got him to third so when Harrington bounced one to second for the first out, Sheridan had a run before it had managed a hit.

The hit came next, though, when Kurt Stamper fought off one tough two-strike pitch then laced a single to left. He swiped second, took third on another wild pitch and, after Wells struck out Cody Clemons, scored on a double to deep center by Ryan Bridges to make it 2-0.

Young followed with a shot that skipped past Tyler Sawyer at short and into the gap in left-center for an RBI double to make it 3-0.

Sheridan managed just two other base runners in the game, both coming in the sixth on a hit batsman who was subsequently picked off and a two-out bloop single by Clemons. 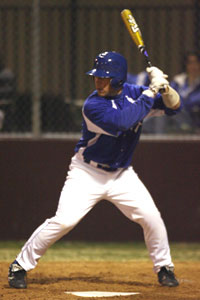 As for the Hornets, a lead-off walk in the second went for naught when Harrington gunned down courtesy runner Evan Jobe trying to steal second. In the third, Brennan Bullock beat out an infield hit then swiped second but was stranded when Justin Blankenship's liner to first was speared by Sheridan's Colton Gilbert then Hunter Mayall's was thrown out on a grounder to second.

The Hornets had baserunners in the fourth as well. Garrett Bock singled and stole second. With one out, Kaleb Jobe walked. With two down, Wells cranked one deep to left but the ballpark held it and Lathan flagged it down with his back to the fence to end the inning.

Bryant's best chance to score came in the sixth when a pair of base-running blunders undermined the effort. Mayall singled to lead off the inning but was picked off first by Harrington. With two down, Sawyer drew a walk, Kaleb Jobe beat out an infield hit then Caleb Milam lined a single to left only to have the pinch runner for Sawyer caught between third and home for the third out.

Butler's lead-off walk in the seventh gave the Hornets a glimmer of hope for a comeback. But Lathan fanned two around a force out to end it.

Young faced one batter in the seventh.