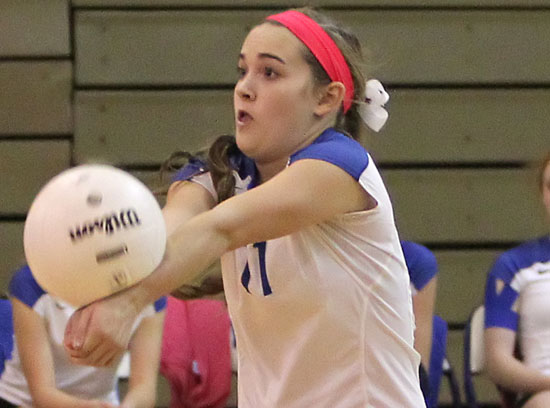 The Lady Hamilton Lady Wolves’ lone 7A/6A-South Conference losses this season have been to the unbeaten Benton Lady Panthers. They have proven to be a formidable force and, on Thursday night, the injury-plagued Bryant Lady Hornets were unable to slow them down, absorbing a 19-25, 19-25, 12-25 loss in their final home match of the season. 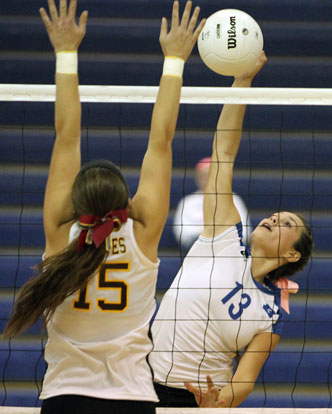 Mariah Aguilar (13) tries to get a hit past a Lake Hamilton defender. (Photo by Rick Nation)

“Our JV had another great win tonight,” said Lady Hornets head coach Beth Solomon. “Varsity just couldn’t get things going. We had another tough loss. Lake Hamilton has some great hitters and is a very scrappy team.”

The Lady Hornets are vying for a four seed for the Class 7A State Tournament in Cabot going into their final conference game at El Dorado next Tuesday. They’ll be seeded in the West Conference, trading spots for State seeding with Siloam Springs, the lone 6A team in the West, which will be seeded in the South. Bryant, with 56 points, currently stands fifth in the ratings between Springdale (59) points and Springdale Har-Ber (48) who will be playing each other on Tuesday. So, with a win at El Dorado, the Lady Hornets could move into the fourth spot and gain a better draw for State.

“We’re looking at a new rotation for next week to adjust for the injuries we have,” Solomon said. “Next week, it’s looking like we’re going to have some of our injured at least partially back and playing. We have two long road trips next week too. We’re hoping to come out of it with a couple of wins to give us the momentum we need heading into the State tournament.”

Bryant wraps up the regular season at Nettleton on Thursday, Oct. 24. State is set to open Oct. 29. 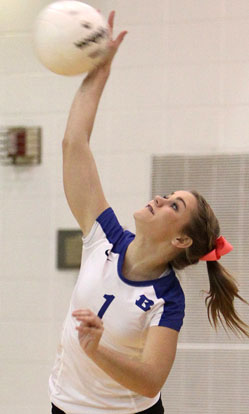 Against Lake Hamilton, the Lady Hornets were good on 90 percent of their serves with five aces, one each from Abby Staton, Britney Sahlmann, Kaci Squires, Madison Greeno and Whitney Brown.

Allie Anderson had six kills, Sahlmann three, Dejai Kelley and Mariah Aguilar two each and one apiece for Rylee Phillips, Mercedes Dillard, and Staton. Dillard had a solo block and joined Sahlmann on another.

On the back row, Squires came up with 10 digs. Whitney Brown had nine, Sahlmann seven. Staton and Savannah Shelton added four each, Dillard three and Anderson two.

In the JV match, Greeno served up four aces, Sierra Jones three and Skylar Harper two. Anderson had a pair and Dillard, Shelton and Shayla McKissock each came through with one.

Jones and McKissock along with Nikki Clay got some playing time as they began their return from the injured list.

Kelley finished with eight kills. Anderson had four with Harper, Jones and Dillard finishing with two each. Shelton and Squires added one apiece. Shelton finished with 14 assists.