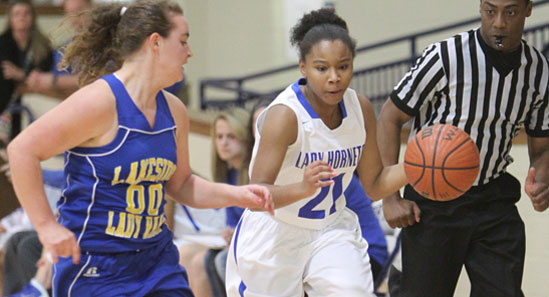 Lakeside advances to Invitational final with win over Bryant

The frustrations of the Bryant Lady Hornets freshman team began early. After Destiny Martin made a steal and drove for a layup to start the night’s scoring against the Hot Springs Lakeside Junior Lady Rams, the Lady Hornets forced seven more turnovers in the first quarter, including three more steals by Martin.

But they only managed to score 2 points in the period. Lakeside effectively utilized screens and back-cuts off the ball to get point-blank shots and the Lady Hornets struggled to stop them. Bryant head coach Nathan Castaldi used timeouts to explain what his team needed to do to counter and used substitutions as well but Lakeside ran out to a 16-2 lead on the way to a 36-20 victory.

With the win, the Lady Rams joined North Little Rock in the finals of the Bryant Invitational Tournament Thursday night at 6:05 at the Bryant Middle School gym. Bryant will play Conway White in the third-place game at 5 p.m., at the high school gym.

Bryant finally snapped the run when Riley Hill grabbed the carom off a teammate’s miss and scored with 3:29 left in the half.

Tatum Hunter, who wound up with 10 points and 10 rebounds for Lakeside, scored on a drive up the baseline to make it 18-4.

The Lady Hornets put together a surge at that point. A 3-pointer by Macey Jaramillo was followed up by Kendal Rogers, who made a steal and was fouled. She hit a free throw and, later, off another Lakeside turnover, Rogers drove for a layup to make it 18-10.

It might’ve been closer but the Lady Hornets struggled at the free throw line. On three trips — potentially 6 points — during that stretch, they converted just once.

After a timeout, Lakeside scored to make it 20-10 at the half. 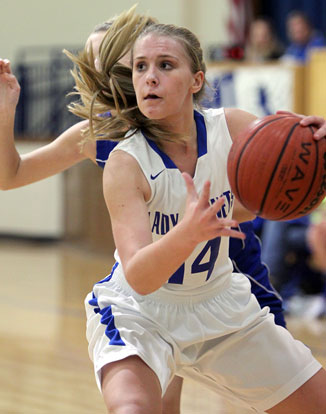 Lakeside pulled away in the third quarter. After Rogers hit a layup with 3:41 left in the period, the Lady Rams went on a 7-0 run. The lead was never less than double digits after that.

The spree was snapped when Kennedy Harris scored inside with :40.9 left in the third quarter. Martin hit a layup in the final seconds to make it 28-16 going into the fourth quarter.

Hunter hit a free throw and Rogers countered with a 15-footer to cut the margin to 29-18 but back-to-back buckets by Hunter sparked a 7-2 stretch to close out the game.

Gaylin Tijack led Lakeside with 12 points. Rogers had 7 for Bryant and Martin 4.