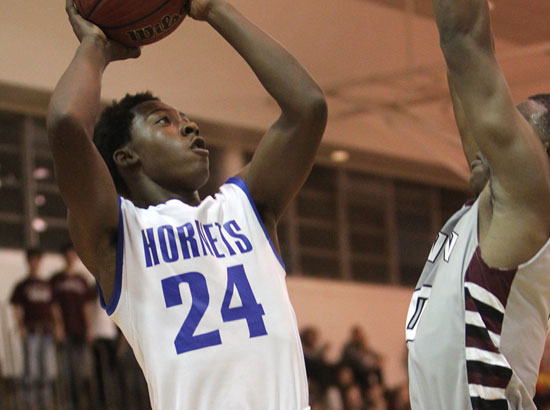 Panthers use free throws, strong finish to rally past Hornets in freshman battle

The Bryant Hornets and Benton Panthers freshman teams got after it on Tuesday, Nov. 19, in the winners’ bracket semifinals of the Bryant Invitational Tournament at the Bryant High School gym. It was a game of wall-to-wall intensity. 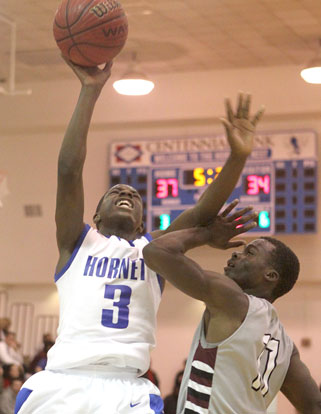 Ultimately, the difference was free throws. The Panthers attempted twice as many and converted nearly three times as many as the Hornets while forging a come-from-behind victory, 55-46.

Despite that, the Hornets led almost throughout, but never by more than 6. Benton surged in the fourth quarter but, with 3:30 to play, it was a one-point game. Two free throws by Bryant’s Calvin Allen, who led all scorers with 18, had pulled the Hornets to within 42-41.

On the Panthers’ subsequent trip up the floor, Westin Riddick took a pass at the right wing, well beyond the 3-point arc and drained his team’s lone 3 of the game. That gave Benton its largest lead to that point, 45-41, and the Hornets could never get that close again.

While Bryant converted just 3 of 7 free throws in the fourth quarter, Benton hit 13 of 18 as the Panthers pulled away late.

They’ll advance to play in the tournament’s championship game on Thursday at 7:10 p.m., at the Bryant Middle School gym. The Hornets will play in the third-place game at 6:05 at Bryant High School.

Riddick finished with 17 points and 10 rebounds. He and the Panthers’ other “big” Fred Harris, combined for 31 points including 16 of 22 at the line.

To go with Allen’s 18, John Winston scored 9 and Kaleb Turner 7.

Allen scored the Hornets’ first 10 points and Bryant held a 10-5 lead. Harris converted a pair of free throws but Christian McIntosh canned a pull-up jumper from 10 feet to make it 12-7. 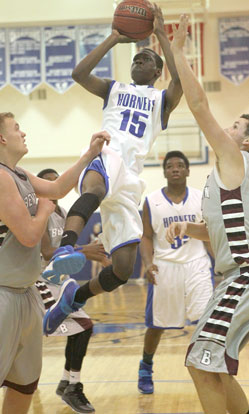 Bryant’s Kaleb Turner (15) goes up for a shot in the lane between Benton’s Westin Riddick, left, and Brayden Smith. (Photo by Rick Nation)

Riddick and Braylon Smith added free throws. In fact, when Smith went to the line with :33.3 showing, Bryant had been cited for eight fouls to Benton one as the Panthers, to that point, had been more effective attacking the rack, particularly Riddick, Harris and point guard Jai Peters.

Peters and Turner traded free throws and it was 14-10 going into the second quarter. Smith cut it to 2 from the line then, in a flurry, Peters made a steal but was called for a charge as Turner set up defensively at the other end. After a Bryant miss, Turner blocked Riddick’s shot and Allen got the carom, pushing to the other end and feeding Jonathan Allen for a layup and a 16-12 edge.

And back-and-forth it went with Bryant maintaining the upper hand until Riddick scored inside to tie it 21-21 with 1:13 left. Turner snapped the tie with :58.6 showing. Riddick misfired and Turner blocked a shot only to have Riddick swat away a shot by Calvin Allen.

Harris was fouled with :02.6 left and converted twice to give Benton its first lead of the game, 23-22, going into halftime.

Bryant’s Marvin Moody put his team back on top with a 3 to start the third quarter. Harris scored and was fouled and, though he missed the free throw, Riddick managed to rebound it and get the stickback to put Benton back on top. But when Winston tied it with an offensive-rebound at 5:01 left in the period and Calvin Allen made a steal that led to a free throw, Bryant was ahead for the rest of the period.

Garrett Cowart drained a 3 in transition to extend the lead and, after Harris countered with a layup, consecutive baskets by Winston and Jack Reynolds had the Hornets up 35-29 with 1:48 left in the quarter.

They had a chance to extend that after a held ball but a 3 rimmed out and, in the final minute, Benton cut it back to 2 before a driving scoop shot by Turner made it 37-33, Bryant, going into the final six minutes.

It was 39-34 after the first minute of the final period then the Hornets suffered a dryspell. Benton took advantage, grabbing a 42-39 lead on free throws from Riddick, Peters and Smith, along with a layup by Peters.

Calvin Allen snapped that 8-0 run with his two free throws at 3:30 only to have Riddick hit the bomb that spurred the Panthers’ finish. Missed free throws hurt the Hornets but they were still within 48-44 when Calvin Allen grabbed an offensive rebound and scored with 2:04 to go.

The Panthers, however, closed with a 7-2 run to close out the win.

The two teams will play again at least twice. The next time will be at Benton on Monday, Nov. 25.