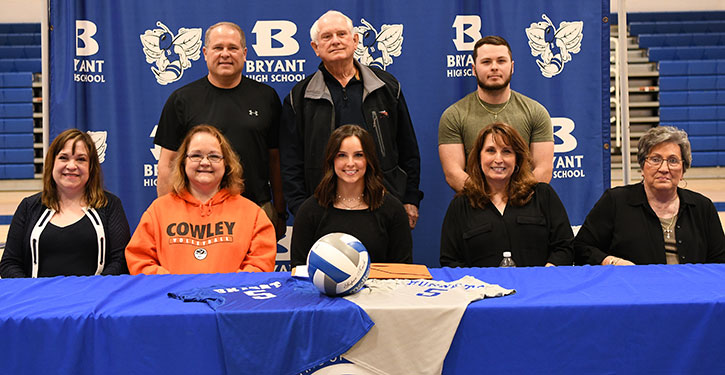 Call it the legend of Erin Thompson.

“Every year around tryout season, I tell my volleyball girls about her,” said Melissa Bragg, the volleyball coach at Bethel Middle School for many years.

Thompson had played for Bragg her seventh and eighth grade years. But for the freshman season, the girls who played at Bethel Middle and Bryant Middle are combined into one team and, often cuts have to be made because of the sheer number of those that want to play.

“I was cut,” she recalled. “I thought I did good, but I guess they didn’t see what they needed. I didn’t make it. Then Coach (Julie) Long had stepped down and Coach (Lawrence) Jefferson came in. I think they had another tryout and I got put back on the list.”

“And I can now add to that story,” she concluded. “I can tell them that she is now playing college volleyball. She is such a beautiful soul. I’m proud to say that I coached her.”

Indeed, the girl that was once cut from her freshman team will be playing in college next fall as, on Tuesday, Erin Thompson, the daughter of Keith and Tracy Thompson, signed a letter of intent to continue her education and volleyball career at Cowley College in Arkansas City, Kansas.

“I don’t think that if I wasn’t cut, I wouldn’t be here today,” Thompson stated. “Because I have worked hard. I have been through camps all summer. That was a big part of my life, when I knew I wanted it more than anything. Growing up and going through that, I knew to never take anything for granted and to take advantage of it.

“Coach Jefferson helped me,” she added. “He was the first person to really believe in me along with Coach Bragg.”

Thompson took a math class with Leigh Ann Back at Bryant High and Back told the story of how, as soon as she mentioned that she was a retired volleyball coach, Thompson was always asking for advice. And, as it turned out, Back became the Lady Hornets’ head coach midway through Thompson’s junior season.

“She wants so bad to get better,” Back related. “It’s been so fun to watch her grow.

“It wasn’t fun to watch her get frustrated because she’s a little bit of a perfectionist, slightly over-analyzes everything,” the coach mentioned. “But I am so proud of her because she had had doubts of herself, doubts about whether she should go on. But then she finally saw what everybody else saw. She saw that she’s got talent. She’s got a passion for the game. And she’s decided to go on.”

“I have learned so much volleyball IQ that I never knew that I needed to know,” Thompson said, regarding Coach Back. “She brought that all in and we learned a lot. She really held us accountable.”

Said Jefferson, “For me, this is special because she was one of the first group I had as a volleyball coach at Bryant in ninth grade. When she stepped on the floor in tryouts, I said she’s going places.

“I have three words for you, diligence, dedication and determination,” he added of Thompson. “Her work and dedication is a testament to her parents.”

“I had the privilege of being Erin’s club coach last year,” said Reid Malone, an assistant volleyball coach at Cabot during the school year. “Sadly, just one season. Jason (Lambert) took her to bigger and better things with the national team this year.

“If you play on my team or been around my team, you know I have a philosophy that’s an acronym that we really focus on that’s called H.E.A.R.T.,” Malone continued. “And it’s not just about the word ‘heart’ and what heart means to an athlete or a person in general. It’s hustle, effort, attitude, respect and trust.

“If I could’ve asked for a perfect example of what that is, it’s Erin,” he added. “As a player, what a joy to see her come to practice and work harder than anybody else in the gym. There’s nobody more competitive against the other team but, more importantly, in herself, pushing herself to be better, to be the best person in the gym, the best person she can be out on the court.”

Said Lambert, “All last season, I had to compete against her. She made my job hard. It was hard for any of us to get the ball down where we wanted it. She was always there. Even if it wasn’t her spot. She was knocking somebody out of the way. She was taking that ball. So, I knew I wanted her this season.

“She’s done a lot of work already,” he added. “She asks a lot of questions. But they’re always good questions, questions a person needs to ask to develop and keep going. With the energy level that she has, the questions she asks, she’s going to be great wherever she goes.”

Asked about Cowley, Thompson said, “I loved the atmosphere, the girls there. It was really great. I had a few other offers but that was the one that just stuck with me the best. I visited once and I knew it was it. The atmosphere — I think that’s very important because I’ve been on some teams where the atmosphere was very different. It really fit me, my energy and, yes, I feel wanted there.”

Asked what she likes so much about volleyball, Thompson said, “Just the energy. It’s just so complex and there’s so many things to it. I really like the team atmosphere. I’m not one for individual sports. I love being a team and celebrating each other. You get to celebrate your friends. I really like that about it.”

And the attitude that her coaches mentioned is what Thompson feels is her strongest asset.

“I think I can bring anybody up,” she said. “I think I can stay positive throughout everything. You’ll never have to pick me up. I think when I’m positive, it makes me a better player. I pass better. I play better.