Lights, no lights: Bryant 10s are lights out in capturing State crown 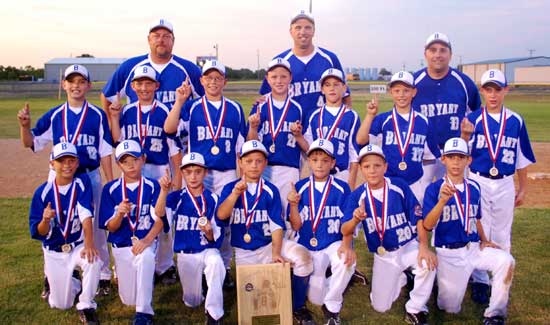 LAKE VILLAGE — The Bryant 10-year-old All-Stars captured the 2011 State Tournament with[more] a 9-1 win over Hamburg on Tuesday, July 12. Backed by a strong defense, Will McEntire struck out six and took a shutout into the final inning while Logan Chambers provided the offense with a pair of doubles, driving in two runs and scoring once. Hamburg had surprised Little Rock with a 13-12 win in the loser’s bracket final when Little Rock gambled, and lost, by holding back their two best pitchers in anticipation of a rematch with Bryant. 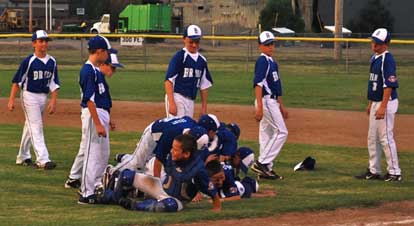 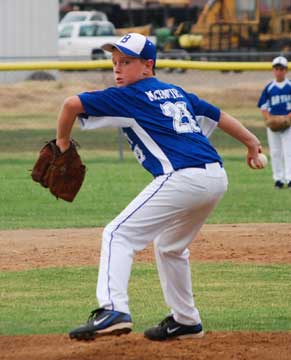 Shortly before the game began around 6:45 p.m., a nearby traffic accident knocked out the power to the ballpark. In the top of the first, Catton struck out and Grant flied deep to center. Chambers slammed a double to the left-center gap but was left stranded when McFarland struck out. In the bottom of the first, Hamburg went 1-2-3 on a pop to Chambers right at the second base bag, a grounder to Dupree at third and a swinging strikeout.

After Dupree grounded back to the mound to start the second, Lessenberry singled to right. Mullings was up next and dropped down a sacrifice bunt and was thrown out at first. Lessenberry was caught rounding second base too far and tagged out in a rundown to end the inning.

In the bottom of the second, McEntire needed just five pitches to retire the side despite giving up a single. The leadoff batter singled to third on the first pitch but was immediately erased from the bases when the following batter hit the first pitch to Chambers, who smothered it near the bag at second, touched the base, and fired to McFarland at first. Three pitches later, McEntire got a grounder to Grant at second and the game moved to the third inning still scoreless. 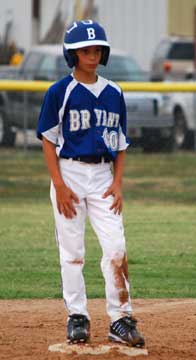 Bryant broke through in the top of third with four runs. McEntire led off with a walk on a 3-2 pitch. Greiner singled on a perfect bunt down the first base line and McEntire went to third on a throwing error by the Hamburg pitcher. Catton walked to load the bases and then Grant hit a hard smash right at the second baseman who forced McEntire at the plate for the first out.

With the count 1-2, Chambers ripped another double to the gap in left, driving in two runs and moving Grant to third. McFarland was up next and, with two strikes on him, lined a solid single up the middle to score Grant and Chambers. Hamburg brought in a new pitcher who retired the next two batters to end the inning, but Bryant had a 4-0 lead.

In its half of the inning, Hamburg threatened but stranded two runners. Their leadoff batter popped high behind second. Catton charged and made a sliding catch in which the ball when went off his glove but was trapped against the side of his glove by his throwing hand. The second batter also flied to center and Catton made a routine catch for the second out. Hamburg’s #9 batter then ripped a double to right-center. Their leadoff batter then grounded just to the left side of the second base bag. The runner on second broke for third, then retreated to second and in the process blocked Chambers’ view of the ball with the result being an infield single and runners at first and second. With a 1-1 count on the next batter, McEntire got the call for a change-up and induced and easy grounder to Dupree at third who stepped on the bag to end the inning. 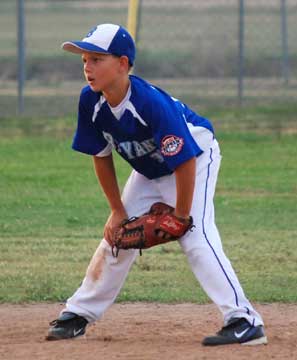 With the Bryant coaches and fans beginning to wonder if the game could be finished before the sunlight vanished, the power came back on before the start of the fourth inning. Bryant then expanded their lead with two more runs. Mullings led off with a soft single to right. McEntire struck out looking for the first out. With Greiner at the plate, Mullings moved to second on a wild pitch. Greiner then slapped a grounder into right and Mullings scored on the play with Greiner taking second on the throw to the plate. A wild pitch moved Greiner to third and he scored when Catton hit a 2-2 pitch to center field for a sacrifice fly. Grant was hit by a pitch to put another run on, but Chambers grounded back to the mound to end the inning.

In the bottom of the fourth, Hamburg threatened again but left the bases loaded. The inning started easily as McEntire got a grounder to Grant at second and a strikeout for two quick outs. A single to right started the Hamburg threat. The inning appeared to be over when the next batter hit a routine grounder to Chambers at shortstop but the ball took a bad hop for a single to put runners on first and second. A single to left loaded the bases. Needing a big hit to get back in the game, Hamburg’s next batter jumped on the first pitch and loft a very high fly to shallow left field near the line. Greiner raced in and almost overran the ball, but reached back over his head and made the catch and keep Hamburg scoreless. 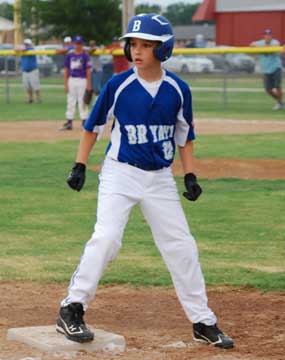 Bryant went in order in the fifth. McFarland struck out. Bariola hit for Dupree and also fanned. Lessenberry grounded back to the mound to end the inning.

McEntire worked out of trouble again in the fifth when the first two Hamburg batters reached safely. An error by Dupree at third put a runner on and then Hamburg’s speedy leadoff batter beat out a bunt for a hit. McEntire fanned the next two and then got a grounder to Chambers who ran to the second base bag to end the inning. Heading to the final frame, Bryant led 6-0.

Bryant picked up three insurance runs in the top of the sixth. Mullings led off and grounded a single into the hole between shortstop and third. Shepard batted for McEntire and singled to right, sending Mullings to third. A wild pitch scored Mullings and moved Shepard to second. After Clontz struck out looking on a ball that was well off the plate, Catton laced a single to right to score Shepard and took second on the throw to the plate. After Grant popped out to second, Chambers reached on a throwing error by the shortstop as Catton scored on the play. McFarland fanned for the final out to send the game to the bottom of the sixth. 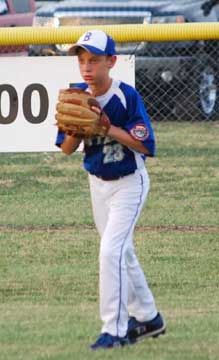 Bryant was three outs from the state championship.

Hamburg’s first batter in the sixth singled on a soft fly to center and moved to second on a wild pitch. After a strikeout, a throwing error by Dupree allowed a runner to reach first and the runner from second to score Hamburg’s lone run. After McEntire whiffed the next batter for the second out, he was removed from the game and received a well-deserved ovation from the Bryant fans. It was a special moment for a young man who just three months earlier had suffered a skull fracture and was initially told that he would not be allowed to play this season.

The Bryant All-Stars will next be in action in the Cal Ripken Southwest Regional Tournament in Levelland, Texas, which begins on July 22. The winner of the regional will advance to the Cal Ripken 10-year-old World Series, which will be played in Winchester, Va., beginning Aug. 12.Coppock took over for the final out and Jackson went to left field with Greiner moving to center. After going to a full count, Coppock got a grounder to Grant at second to end the game.

Amid the celebration on the field, some of the Bryant players, with a little help from one of the dads, surprised Manager Catton by dumping the water cooler on him to thank him for leading them to a third straight state championship. 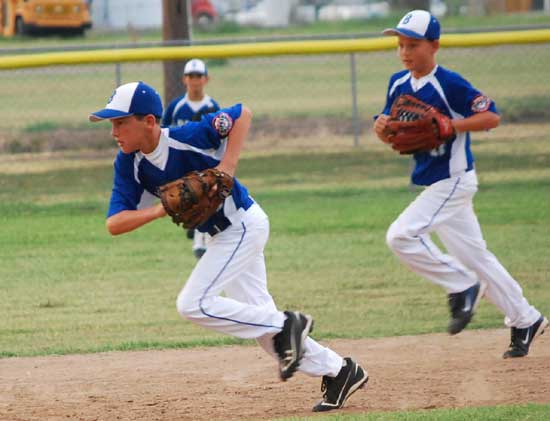 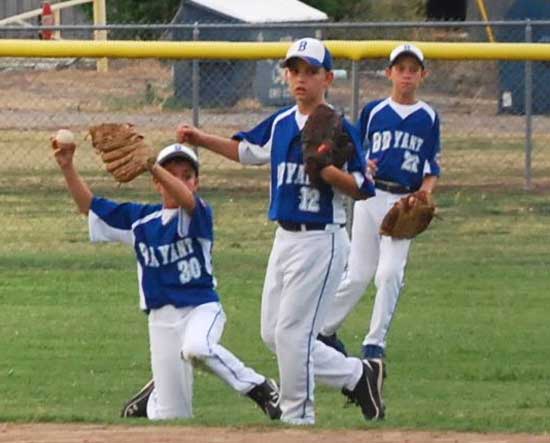