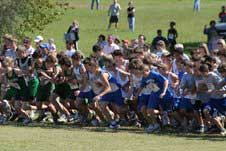 RUSSELLVILLE — Junior Luke Lindsley set a new personal record over a 5K (3.1 mile) distance with a time of 16:56 to place sixth overall as the Bryant Hornets cross country team finished fifth at the Cylcone Invitational on Saturday, Oct. 3.

“He ran a super race,” he said of Lindsley. “We also had some sophomores step up for us. Jesse Wolf and Peter Alverio did a great job of getting up and reducing the time gap behind our fourth runner."

In the junior boys division, the Bryant finally broke Russellville's stranglehold on the area competition by winning the 20-team meet with a total of 86 points. Cabot placed second with 100 points followed by Russellville (103), Lake Hamilton (119), and Lakeside (136).

Rodrigo Rodarte was the top Junior Hornet, placing 12th in 11:49 over the two-mile course.

"We were very pleasantly surprised to get the victory today,” Oury stated. “We took a page from Coach (Dan) Westbrook's senior high girls team and used a nice ‘pack attack.’ We had a 40-second gap from our first to fifth runner, which is very good.

“It's always nice to get a victory, so hopefully we can set a trend of bringing home first place trophies,” he added. “Coach (Rhonda) Hall and Coach (Angel) Dale really have done a super job at the middle schools. Three of our top seven runners are either in seventh or eighth grade, which is very exciting."

Bryant is scheduled to run at the Lake Hamilton Wolves Invitational at Oaklawn Park on Saturday, Oct. 10.