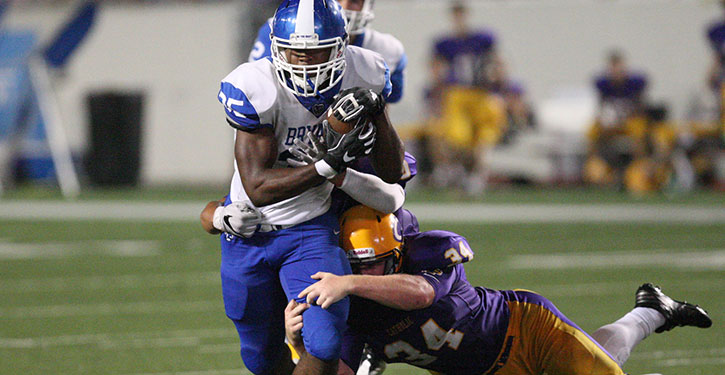 Viewers can now find Bryant Hornet football at the following location each and every week at: http://www.fidelitycommunications.com/local6/ytlive_stream.php?channel=local6d or https://www.youtube.com/channel/UCKUaJ21ehWepJhle86R_ITg

No doubt, the Bryant Hornets and their fans have seen the scores. The Little Rock Central Tigers lost in lopsided fashion to North Little Rock, a team the Hornets hope to contend with for the 7A-Central Conference championship, and the Fort Smith Northside Grizzlies, a team the Hornets got the better of in an abbreviated game two weeks ago.

They’ve seen the standings that show the Tigers at the bottom.

So, with Central playing at Bryant tonight, can the Hornets maintain the focus and effort that lifted them to a 59-28 victory over Little Rock Catholic last week?

“We tell them, it’s about us,” said Hornets head coach Buck James. “You hear Coach (Chad) Morris (at the University of Arkansas) talking about, it ain’t about our opponents as much as it is about what we do.

“You know, every guy on our team has a job,” he noted. “We tell them, ‘Do your job. Do your job to the best of your ability. Be a blue-collar football player and work hard.’ That’s all we can ask out of them.

That’s what the Hornets did, for the most part, against Catholic, which was 4-0 coming into last week’s contest.

“I was really proud of how our team went out there and attacked it,” James said. “With that being said, I felt like we left some points out there that we could’ve gotten. There’s still a lot of room to improve. But I like the way our football team is playing right now.”

“A new coaching staff, really young football players and they’re going through some growing pains that you normally go through with young players,” James related. “They play spurty. They’re big and strong. They’re physical. They’ve got good athletes. They play good at times and, at times, they don’t play very good.

“You know, they’ve got six players that are playing here in central Arkansas that would start for them that are at other schools,” he added. “They’ve taken a big hit with guys leaving out of there. I have a lot of respect for those kids who stayed.

“Coach Laster’s going to do a good job,” the coach stated. “He’s going to get those guys going in the right direction. It just doesn’t happen overnight. It’s going to be a process. He’s battling a lot of demons that go on in sports today, when kids want a quick fix and they want to go somewhere right now where it helps them, benefits them.”

The Hornets have won 11 in a row against the Tigers, who have not defeated Bryant since 2006.