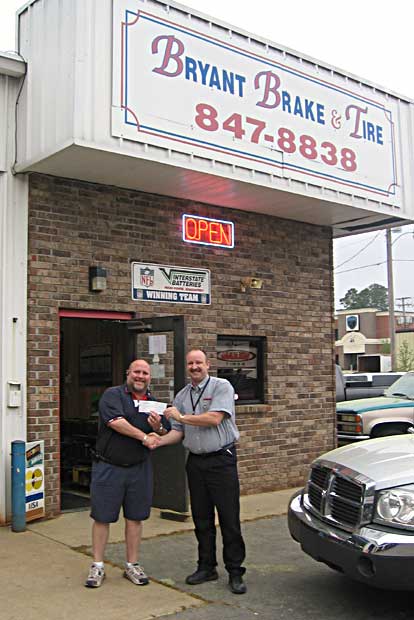 If you’ve ever filled out one of those surveys that businesses sometimes hand out as part of a receipt or from an email follow-up to a purchase even though you know the prize drawing probably has such long odds, you’d never win, here’s some encouragement.

Shawn Omholt, owner of Bryant Brake & Tire, was selected from all those that took a survey for Auto Zone to be awarded a check for $5,000. On Wednesday, April 7, Ray Edwards, territory sales manager for Auto Zone, brought the check to Omholt.

“I got an e-mail one day for a customer satisfaction survey from Auto Zone and went ahead and answered it,” Omholt explained. “In my own words, I think it was 50 words or less, it asked me to write about the service I was getting from Auto Zone. I basically just told them the truth about the awesome service I was getting and the quality of the parts and how it was working out well for us, and that I was very pleased and satisfied.[more]

“About six months later, I get a FedEx and it says I’m the grand prize winner,” he continued. “Of course, I was very skeptical and I couldn’t even remember what it was for. My manager reminded me about it.

“But I still thought that perhaps it was some kind of fraud, the way things are. But the lady answered the phone (at Auto Zone) and said, ‘No, this is legitimate. You’re the grand prize winner, you’re the only one.’ It’s exciting.”

Omholt said he and his wife, Cindy, will be using the money for a cruise.

“Just like most other companies, a customer goes on-line and takes a survey and the winner is picked randomly out of the entrants from over 4,400 store locations that we have nation-wide,” Edwards explained. “I don’t know how many customers replied but I can tell you that for six weeks they had a big push for us to tell our customers to make sure they go on-line and do this with a chance to win $5,000.

“I think it’s a yearly deal that we do, just trying to find out how we’re doing business-wise,” Edwards added. “I tell you, I’m just proud that it’s one of my customers. That means the world to me. I mean, out of 50 states, that’s awesome.”