Not until she received the certificate in the mail did 15-year-old Bryant teen Saxon Smith know she was honored for her hard work and volunteer hours over the past summer. 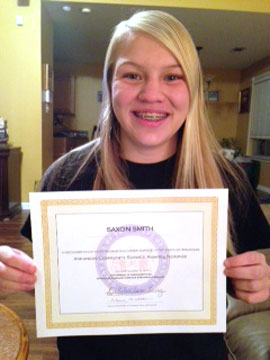 Last month, Smith was chosen as an Arkansas Community Service Award monthly winner. She was nominated and received the recognition for her volunteer work on an underwater memorial in Lake Ouachita, known as “Fearless Rock” which honors Hot Springs native and U.S. Navy SEAL Chief Adam L. Brown.

“Will Stephens, the founder of the memorial nominated me but I wasn’t in the loop,” Smith said. “Everyone wanted it to be a surprise. When I got the certificate, I said what did you do? I was shocked.”

Brown, 36, died in March 2010 while stationed in Afghanistan from injuries sustained in battle with militants. Located on a large rock in Lake Ouachita, the memorial is accessible to both land and boat-based divers. Consisting of a black granite marker with laser-etched quality, it is located 43 feet below the surface of the lake. The motivation is to inspire others to be fearless like Brown. The book, “Fearless: The Undaunted Courage and Ultimate Sacrifice of Navy SEAL Team Six Operator Adam Brown”, focused on Brown’s life and accomplishments.

Smith spent most of her summer weekends, 16, helping build the memorial, and the group worked all day Saturdays and Sundays.  At first, she helped the dive team assemble their gear, but after a few months she became one of the underwater divers who assembled the memorial. Certified and diving since she was 8 years old, she completed over 250 volunteer hours on the project. Prior to construction, the spot where the memorial was to be placed was marked by an American flag.

“I was pretty emotional when I first saw the flag,” Smith said. “The first time I saw it I felt like crying.”

Scuba diving is a family activity for Smith’s family. Her dad scuba dived in college and kept it up so it was a natural fit for Smith. For her 8th birthday, she wanted to learn to scuba dive instead of having a party.

On July 27, 2013, the memorial was complete, and Smith had the honor of placing the American flag on top of the memorial. The flag joined the Arkansas flag and the Navy Seals flag.

Smith also plays the saxophone in the band and is a school ambassador in addition to being in the American Sign Language club. Her summer inspired her so much that she would like to volunteer at the Humane Society next summer.

The Arkansas Community Service Award is administered by the Department of Human Services. Smith also received notification that she will be honored with all monthly winners in a ceremony next year.