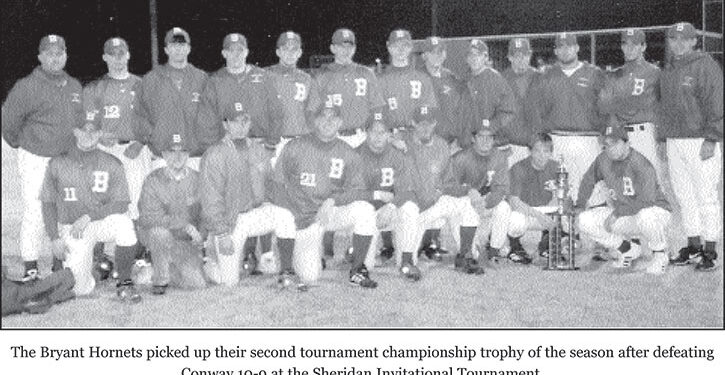 Hornets rally to win another title

SHERIDAN — Another tournament, another trophy — the Bryant Hornets captured their second tourney title (in a third, they were runners-up) on the young season Wednesday, March 6, but it took some seventh-inning dramatics to get it done.

B.J. Wood drilled a two-out single with the bases loaded, driving home the tying and eventual winning run as the Hornets rallied from a 9-8 deficit after they were a strike away from a loss on four consecutive batters.

Lefty Cody Dreher worked around a pair of walks in the bottom of the inning to make it stand for the 10-9 win, Bryant’s ninth in 10 games in 2002.

Dreher was at the plate with two out in the top of the seventh and took a 3-2 pitch for a walk. With two strikes, Scott Yant (Peeler) hit a roller that was misplayed as Dreher raced to third. After Yant stole second, Matt White drew a walk on a 3-2 pitch to load the bases. The count went full to Wood as well before he ripped his clutch base hit.

Conway’s Scott Coulter drew a lead-off walk in the bottom of the inning and swiped second. But Dreher caught Blake Ragan looking then got Peyton Hillis to ground to third for the second out as Coulter advanced to third with the tying tally. Another walk put runners at the corners but Dreher got the next batter to ground into a force at second to end the game.

Dreher improved to 2-1 with the victory.

Wood, White and Derek Chambers each had three hits for the Hornets. White’s included a solo homer in the top of the sixth. At the time, the shot increased Bryant’s lead to 8-5. But Conway rallied to take the lead in the bottom of the inning, scoring four times after two were out.

The Hornets had gained the upper hand in the first when Wood doubled, Cody Graddy singled him to third and Zack Cardinal, running for Graddy, swiped second to set up Chambers who drilled a two-run single.

With two down, Clay Jones was hit by a 1-2 pitch. Kevin Littleton then singled to left and when the ball was misplayed, Chambers scored to make it 3-0.

Littleton, the Bryant starter, worked around a one-out single by Ragan in the bottom of the inning but then ran into trouble in the second as Conway rallied to tie it with the help of a pair of Bryant errors.

Another pair of Hornet miscues contributed to the Wampus Cats’ two-run third. Dennis Jones contributed an RBI single with two down to make it 5-3.

Bryant bounced back in the top of the fourth. Littleton walked and advanced to second on a one-out grounder to third by Scott Peeler. White chased him home with a double then followed on around when Wood lashed a two-bagger, tying it at 5.

In the bottom of the fourth, Littleton retired the first two but when Peyton Hillis and Kyle Hillis hit consecutive singles, Dreher came on to relieve. An error loaded the bases then Brian McClain drilled one to center only to have White rob him of extra bases and keep it tied.

Chambers opened the Bryant fifth with a double and Jeff Carpenter walked. Justin Woods, running for Chambers, drew an errant pickoff throw from the Conway pitcher and moved up to third and, with one out, scored on a squeeze bunt by Littleton that wound up going for a base hit.

Carpenter alertly advanced all the way to third and, moments later, scored on a wild pitch to make it 7-5.

Dreher worked a 1-2-3 inning in the bottom of the fifth setting up White’s blast in the sixth.

In the Conway sixth, Dreher came within a strike of getting out of the frame unscathed. With two out, and a runner at third, he worked the count to 2-2 on Kyle Hillis then hit him with a pitch. A pitch later, Sean Pratt cracked a two-run double. McClain drew a walk then Jones burned the Hornets again with an RBI single. McClain scored on a wild pitch to make it 9-8 before Dreher got the final two outs, fanning pinch-hitter John Davis and inducing a roller back to the mound by Coulter. 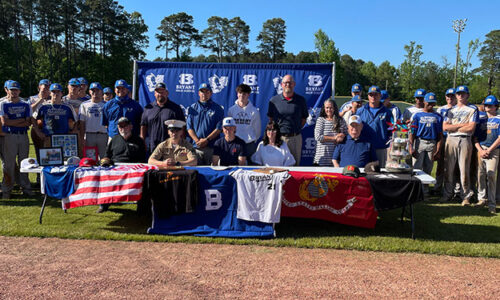