McKim bidding to be re-elected as City Clerk 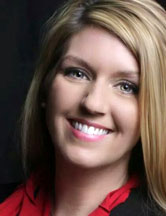 Bryant City Clerk Heather McKim stated that the city is at a crossroads and it is now more important than ever that the community move in a positive direction.

“That’s why I’m running for re-election,” she said. “The city is exploding with new development, new opportunities and new people. With all this growth come new challenges. As the City Clerk, I have made many improvements within the scope of what a city clerk can do; however, there is still much more work to be done.

“In 2010, the residents of Bryant spoke loudly that they wanted me to do the job – they hired me with their vote,” she said. “That is something I take very seriously, and after taking office in January 2011, I began working and haven’t looked back. Outside of my official duties as clerk, I have been given the opportunity to work on a few other projects in the city, and some of those are long-term projects that I hope to see completed one day. I would love to be able to say, ‘I worked on that project, and now it is something Bryant residents can enjoy.’”

McKim noted that her experience in government extends more than 17 years into the past. In 1996, she went to work as a Corporations Clerk for Arkansas Secretary of State Sharon Priest. She worked for two years in the Arkansas State Senate Office of Constituent Services, assisting senators with calls and requests from constituents. For six years, she was the office manager and scheduler in the office of the late Lt. Governor Win Rockefeller. She spent three-and-a-half years in the Arkansas Division of Legislative Audit. Prior to her election to city clerk, she worked as the finance director of the Republican Party of Arkansas.

“In 2010, I decided to put my experience and education to use in my local community,” she said. “Bryant is important to me, it’s where I went to school, and it’s where I chose to live and raise my own children.”

In the years since taking office, McKim notes specific areas of accomplishment:

“Transparency was my main goal for running. Every promise I made in my 2010 campaign, I have fulfilled. In my three years and eight months of public office, I have worked very hard to create the bridge connecting the residents to their government. The City Council approved funds to revamp the city website, and with the help of IT staff and Civic Plus, I developed a new interactive City Clerk page for the benefit of Bryant residents, city employees, and other community stakeholders (current and future) http://www.cityofbryant.com/index.aspx?nid=869.

“With the approval of the Mayor and City Council, I implemented a plan to upgrade our Laserfiche software, the City’s archive system, and added a weblink to the city website,” she continued. “In addition, we added a ‘MuniCode’ link, which allows individuals to search codified ordinances by category to make them easier to find. Another accomplishment I am very proud of is initiating a ‘GO GREEN’ policy at City Hall and eliminating waste in the City Clerk’s office. I created a report detailing the City’s initiative to ‘Go Green,’ encompassing all departments, that was later used for grant and award applications that resulted in the City being named the 2013 Government Recycler of the Year. Further, with the technology provided by Civic Plus, I have been able to make the City Clerk’s office paperless. Residents may view all agendas and attachments right from their smartphones and rather than wasting paper, money, and time printing hundreds of copies, the agenda is now displayed on monitors during the council meetings. The council members use Xoom Tablets and laptops for the meetings that were repurposed from the Fire and Police Departments. I worked with the IT Department to make all audio recordings from meetings available on the website. I have worked very hard to make the Clerk’s office more efficient and transparent. Information is much more accessible to the public than in years past and I am very proud of that accomplishment.”

McKim said she has also worked closely with Growing Healthy Communities and spearheaded the city’s first Walk Audit Study which will be used with other studies to improve infrastructure issues and sidewalks within the city.

Her vision for the city is about planning for growth, she asserted.

“Bryant is the community where people come together,” she said. “My focus is on the future. I would like to see economic development grow and more jobs created right here. We have to plan now for the future sustainability of Bryant. The work we are doing in the City to develop our Master Trails Plan is very important to me and I would like to work with other officials and staff to see those multi-use trails and sidewalks come to life. I would like to see community organizations thriving and working together, along with the city, to achieve common goals. Coming together and combining resources is the best way to get things done. Recycle Bryant is another initiative that is important to me and one I would like to see continue. My vision for the City Clerk’s office is to continue to strive for more efficiency and transparency and continue to improve the communication process with the residents. We are currently working on a records retention policy for the City and I look forward to working with other departments to train their staff on archiving records in our Laserfiche system. My vision is to make the City Clerk’s office the go-to place for the mayor, city council, and residents to find the information they need.”

McKim holds a Bachelor’s Degree in Business/Management and is currently pursuing a Master’s in Public Administration, and in early 2014 she earned her certification as an Arkansas Certified Municipal Clerk with the University of Arkansas. She is a member of the Arkansas City Clerks, Recorders, and Treasurers Association (ACCRTA) and was recently elected as the Secretary of ACCRTA’s Executive Committee. She is the chair of the ACCRTA Legislative Committee and a member of the Website and Facebook Committees. McKim also serves on the Advisory Committee for Cities of the First Class for the Arkansas Municipal League.

“I respectfully ask you for your vote in early voting beginning Monday, Oct. 20th or on election day, Tuesday, Nov. 4th,” she said.