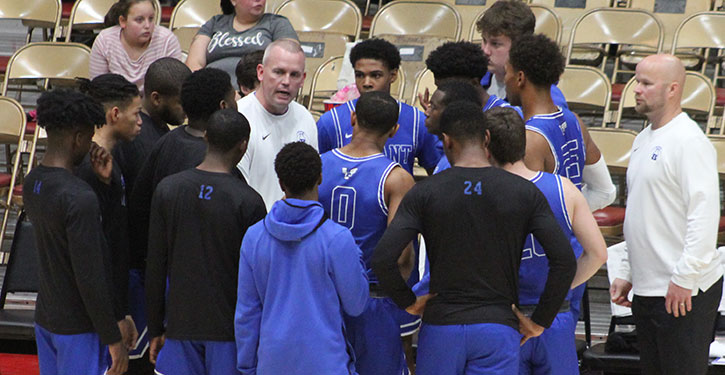 Memphis team surges in the second half to overtake Hornets

PINE BLUFF — The Bryant Hornets were one team before the end of the football season. There was no one with a lot of height. Once the Hornets football team finished off its second consecutive State title, the Bryant basketball team changed. Four guys from the gridiron added size to the Hornets’ court and it really changed the team.

With a bevy of games during December and some injuries, particularly to starting guard A.J. Jenkins, the Hornets have struggled in the transition.

“So, we’re just not there,” acknowledged Hornets head coach Mike Abrahamson after his team’s fourth consecutive loss, 81-72, to the Wooddale Cardinals of Memphis at the King Cotton Classic. “We just have a lot of work to do. And when you keep having so many games, we just haven’t had enough practices.

“And I don’t know if that’s going to fix it either,” he asserted. “It remains to be seen if we’re going to be a tough team or not, complete with tough individuals that make up a tough team. I know that the way to address these issues is to have practice and we just have more games than practices.

“When we got our football guys, just the whole dynamic of the team changed,” he noted. “We’ve got to try to find out how we’re going to do this. And, unfortunately, we’re having to do it playing, arguably, the toughest schedule in the state. We’ve battled some injuries. We just don’t have a lot going our way right now. We will see if we can turn it around once we get some practice time.”

The Hornets will get back to the practice floor after Monday’s King Cotton finale against Raymond, Miss. They won’t play again until Jan. 7 when they open the new Hornet Arena with the annual Saline County Shootout against Benton.

Against Wooddale, the Hornets built a 42-32 lead at halftime then the Cardinals, behind a triple double from 6-7 swingman Jonathan Lawson, roared back to win 81-72. Lawson had 27 points, 13 rebounds and 10 assists. Jalen Brown, a 6-4 guard, added 20 points, seven boards and six assists. Jonathan Duncan scored 16 points.

“The first half was really good, offensively really good and defensively was okay,” said Abrahamson. “I still thought they got a lot of shots at the rim in the first half.

“In the second half, Wooddale just really turned it up a notch,” he continued. “They were way more aggressive attacking the basket. They would get a rebound on our end of the floor and just push it right down the middle of the floor and dare us to stop them. And we just wouldn’t do it. And, in a sense, they would just shoot until they made it. They just went to another level of aggression, and really used their athleticism and, unfortunately, we didn’t handle it well. And they kicked our tail in the second half.

“I told our guys during a timeout that I thought one of their strategies in the second half was to let us beat them off the dribble in the full court so they could chase us down and tip it away from us from behind,” the coach related. “They knew they were so fast and athletic.

“Our guys, if you ask them, they know that you get two dribbles in the middle of the court in transition before you have to make a decision about what you’re going to do with that ball because any more than two dribbles, somebody’s going to catch you. They could answer that question. However, in the heat of the moment they seemed to have forgotten that principle. That resulted in a lot of turnovers, a lot of opportunities that we could’ve had of scoring went away because we dribbled it too many times in the middle, let them chase us and track it down and go the other way with it.”

Wooddale finished with a 38-22 advantage on the boards. The Cardinals wound up shooting 54 percent from the field (30 of 56). Both teams hit eight 3’s.

“They absolutely just destroyed us on the glass, especially the second half,” said Abrahamson. “We were minus-two at halftime.”

Of Lawson and Brown, the coach said, “They’re nationally-ranked players. Obviously, Memphis is high-level basketball. The frustrating thing is that they turned up their aggression and their physicality and their use of their athleticism and it just seemed like we, in a lot of ways, accepted it and just kind of let it happen. Then, as a result, we got pretty stagnant offensively. I thought we were pretty aggressive in that first half.”

The Hornets scored the first 9 points of the game on a pair of 3’s by Payne and another by Adams. Brown broke the ice for Wooddale with a pair of free throws then Hunter posted up for a bucket. Payne and Lawson traded free throws then Adams hit another 3 to produce the Hornets’ largest lead at 15-3.

The Cardinals whittled that margin to 4 before an offensive-rebound basket by Payne made it 22-16 going into the second quarter.

Robinson and Hunter scored the first two baskets of the second quarter to push the lead back out to 10. The teams, more or less, traded baskets the rest of the half. With 2:54 left, Robinson canned a trey to push the lead to 11, 37-26. He would hit another with :47 left to make it 40-29. Duncan countered then when Hunter beat the buzzer with a putback, the score was 42-32.

But Wooddale started the second half with an 11-2 run. Bryant’s lead was down to 1 point. Robinson hit a driving jumper, but Brown tied the game with a 3. After a pair of missed free throws, Duncan canned a triple to put the Cardinals ahead to stay.

A follow bucket by Hunter was countered by another 3, this time by Kevin Brown. Robinson scored on a short jumper to make it 52-50 then Wooddale pushed the lead to 57-53 going into the fourth quarter.

The Hornets tried to rally. Hunter scored off a spin move then Payne’s three-point play made it 68-62. Lawson scored but Pitts hit a 3 from the corner and the margin was down to 5 with 2:35 left in the game.

Sparked by consecutive baskets by Santerrio Brown, who had not scored to that point, Wooddale put together another run that pushed the lead out to 79-65, its largest lead of the game. 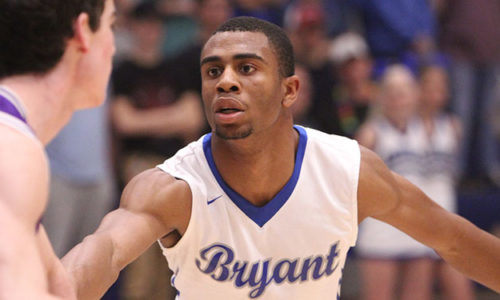 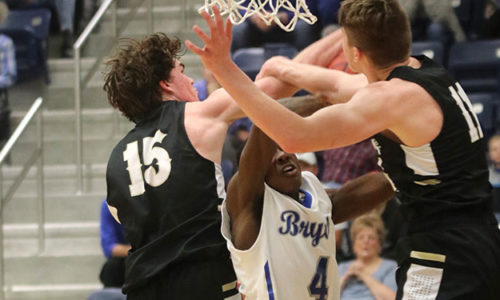