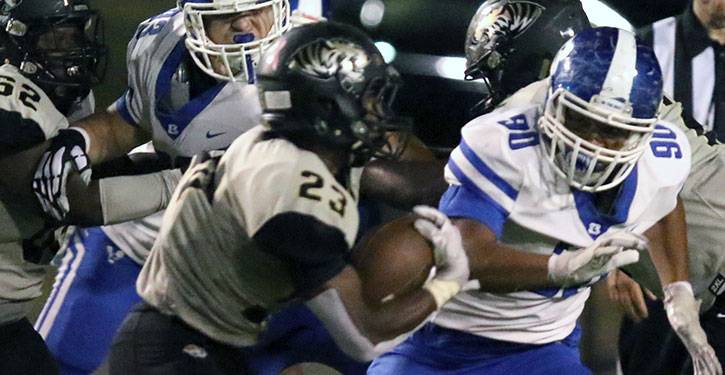 Bryant senior defensive end Kyle Green speared a screen pass with one hand and returned the ball 24 yards for a touchdown on the very first snap from scrimmage Friday night at Quigley-Cox Stadium.

For the sixth time in as many games this season, the Hornets built such a lead that the second half was played under the Arkansas Activities Association sportsmanship (mercy) rule. That’s a running clock except for timeouts, injuries and changes of possession, which kicks in when a team has a 35-point lead in the second half. It was the fourth time that the Hornets had that big a margin going into halftime.

The most points the Tigers had surrendered this season in a full game was 35.

The 48-0 halftime lead wound up as a 55-14 victory as Bryant, ranked number one in Arkansas and number 21 (and rising) in the MaxPreps national rankings, improved to 6-0 overall and 3-0 in the 7A-Central Conference.

The Hornets have now outscored their six foes 237-20 in just the first half.

Central, which came in with a 4-1 mark, dropped to 1-2 in league play. Next Friday, Bryant hosts Fort Smith Southside for Homecoming and Central entertains Cabot.

Not counting the interception return, The Hornets scored on their first six possession.

“Kyle made that play then it just took over from there,” stated Hornets head coach Buck James. “That’s really what you’ve got to have. It’s like, in baseball terms, a lead-off home run.

“I’m really proud of the way our kids came out of the dressing room ready to play,” he continued. “I thought we did a great job, especially on defense, and then putting the ball in there and making drives on offense. Our team seemed to be prepared and ready to play. Our coaches did a great job.

“We did a lot of things good,” the coach added. “They really hurt us last year on a couple of the plays that they had. You know, they’re a physical 4-1 football team and we dominated the game. As a coach, you can’t ask anything more than that.”

Central was limited to just 46 yards of total offense in the first half. The defensive effort also featured three interceptions. Along with Green’s, Tamaurion Wilson and Austin Schroeder had picks.

Offensively, meanwhile, Bryant had 371 yards of offense by halftime. Quarterback Austin Ledbetter completed 15 of 23 passes for 254 yards and two touchdowns without playing a snap in the second half. Ahmad Adams finished with 68 yards on four carries but three of those were touchdown runs.

Joseph Young was the Hornets leading receiver with seven catches for 93 yards and a touchdown.

Central took an early risk. Trailing 7-0 after Green’s pick-six, the Tigers started again at their own 15 after top-notch coverage of the kickoff by the Hornets. They faced a fourth-and-2 at their own 23 and decided to go for it. Running back Sam Franklin was stopped short by the interior of the Bryant defense.

So, the Hornets took over on downs just 24 yards from more. On a third-and-1 at the 15, Adams plowed to the end zone for a touchdown that, with Brock Funk’s extra point, made it 14-0, just two minutes and 14 seconds into the game.

Central went three and out, punting the Hornets back their own 36. They didn’t stay long in their own end. Ledbetter threw to Young and he turned it into a 26-yard pickup. Meaders later caught a throw for 16 yards to the Central 27. Two plays later, Ledbetter fired to Schrader for a second touchdown.

Central’s lone first down of the first half came on the first play of the next series. Junior running back Sam Franklin squirted 17 yards. A 7-yard burst got the Tigers into Bryant territory. On a third-and-2 at the 46, Hornets’ linebacker Catrell Wallace knifed through to drop running back Jeremiah Sample for a loss.

The Tigers punted the Hornets back to their 13. With a penalty, Bryant had first down at its own 8. Eleven plays later, Adams sliced through the Tigers defense on a 9-yard touchdown run. Passes of 21 yards to Young and 35 yards to Meaders set up the scoring play.

Once again, the Tigers went three-and-out with Wallace dropping quarterback Lawson Gunn for a loss on a third-down play.

Meaders returned the punt 31 yards to the Central 35. With :02 left in the quarter, the Hornets snapped the ball and Adams rumbled through the Tigers’ defense for another score and the 34-0 lead going into the second quarter.

Linebacker Koby Melton made a nice open-field tackle of Sample on a third-down play, preventing a first down on the Tigers’ first series of the second quarter.

In seven plays, the Hornets drove 63 yards for yet another score. Tanner Anderson covered the final 31 yards.

With a good return of the subsequent kickoff, Central set up offensively at its own 42. But they still struggled to move the ball. They went for it on a fourth-and-7 at the 45. But Daylon Land and Green combined to sack Gunn.

Bryant took over on downs at the Central 43. After an 18-yard pass from Ledbetter to Myles Aldridge. A holding penalty undermined the drive, however, and with just under six minutes left in the half, Ledbetter’s pass to Schrader was taken away by Central’s Lamont Robinson.

From the Bryant 35, however, the Tigers could make little progress. On a fourth-down play, Gunn’s deep pass was picked off by Wilson. He returned the ball back to the 35.

Spurred by a 32-yard pass from Ledbetter to Young, the Hornets drove to the 1. After an offensive pass interference penalty wiped out a touchdown pass. Backed up 15 yards, the Hornets went right back to work. Anderson scampered for 9 yards then Young caught a 7-yard strike from Ledbetter for the TD.

The coaches started working reserves into the game. Schroeder’s interception came on the last play of the third quarter. His return nearly broke all the way, but he was knocked out of bounds at the 15. Xavier Foote ran it in from there, a 15-yard touchdown run that made it 55-7.

The Tigers used up the last 9:08 (and counting) to drive for another score. The touchdown came on a 4-yard pass from Gunn to tight end Davis Hawkins. Time ran out as Baker booted the extra point.