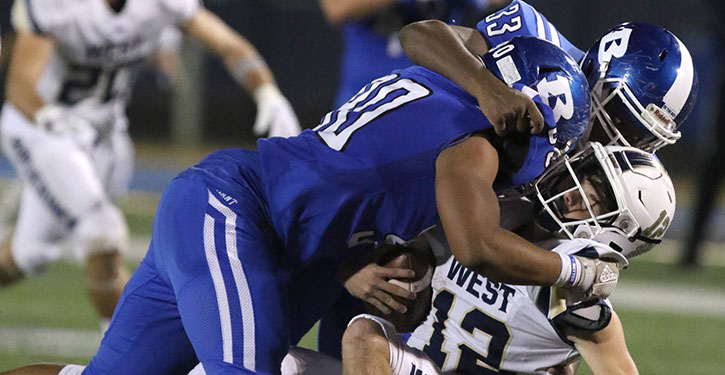 Back to the Rock.

Perhaps the state’s two most physical high school football teams will play for the Class 7A State championship in a rematch of the 2018 title game as the top-ranked and defending champion Bryant Hornets advanced past the Bentonville West Wolverines, 35-0, and the North Little Rock Charging Wildcats advanced past the previously unbeaten Bentonville Tigers, 42-24.

They’ll meet for the second time this season — Bryant won 35-21 on Nov. 1 — and the fourth time in two years with the championship next Friday, Dec. 6, at War Memorial Stadium in Little Rock. Bryant won last year’s title game, 27-7, and will be aiming for a repeat.

“I told our players after the game, the hardest thing in the world — I don’t care what sport or venue at what level or anything — is to be the number one team at the end of last year and go back and have everybody’s best shot from the scrimmage — you know, every game has been a big game for who we played,” stated Hornets head coach Buck James. “To be able to do that and get back again says a lot about our kids and our coaches and our community because — we have them two hours a day. Somebody else has got them the other 22. To get them to buy in, to do what we want to do speaks volumes.

“I’m proud of our kids,” the coach asserted. “They went out there and took a hammer and beat the wall with it. I can’t ask for anything more.”

It was Bryant’s third shutout this season and the team’s 10th mercy-rule victory in 12 games this season. The Hornets only allowed the Wolverines to cross midfield once before the game was in mercy-rule mode late.

“I tell you what, it makes it easy on the offensive play-caller or a head coach or whatever when you have a good idea that you ain’t going to give up a point,” James commented. “It gives you a lot of flexibility.

“(Defensive coordinator) Coach (Quad) Sanders had them blanketed on everything they did, and our kids knew what was going to happen before it happened,” he said. “That’s half the battle. Then believing in themselves.

Quarterback Austin Ledbetter completed 9 of 19 passes for 114 yards and two scores, both to Hayden Schrader. But it was the ground game with Ahmad Adams and Tanner Anderson running behind center Devin Pitts, guards Tanner Wilson, Jason Shifflet and Ty Johnson along with tackles Will Diggins and Brooks Edmonson.

“But we ran two plays — two run plays the whole game,” James said. “We ran the same thing the whole game. That says a lot, to be able to have that kind of production and not have to do a whole lot. We were good on the outside zone tonight.

The Hornets rushed for 203 yards including Adams’ 117 yards on 20 carries.

“I’m proud of our football team,” the coach stated. “The offensive linemen played pretty good. They got us some pushes. Our running backs ran hard.”

The first time the Hornets hosted the Wolverines, they ran up a 35-0 lead by halftime. It might’ve been the same this time around but with a 14-0 lead, Bryant drove inside the Wolverines’ 10 twice only to come up empty.

A 21-yard touchdown run by Anderson with 3:23 left in the half gave Bryant a 21-0 lead at the break. That TD was set up by Godwin’s pick as he sniffed out a screen pass.

The Hornets had built the 14-0 lead by scoring on their first two opportunities. The first came after a West punt.

The ensuing 66-yard touchdown drive started with a pass from Ledbetter to Schrader then the Hornets pounded it on the ground with six consecutive rushes by Adams. They reached the 17 and Ledbetter found Schrader again for the TD.

Brock Funk’s extra point made it 7-0.

Bryant took over on downs and covered the 42 yards to paydirt in eight plays. A fourth-down completion from Ledbetter to Jake Meaders picked up 16 yards and new set of downs. Anderson then dashed for 12 yards to the 10. Schroeder’s second TD reception covered 9 yards and, with Funk’s extra point, the first 14 were on the board.

On the subsequent series for West, Land stopped Whitlatch for a loss then McDonald’s throw down the middle was picked by Scarlett.

Just 32 yards from another score, the Hornets made it to the 7, thanks to a 22-yard gallop from Adams. But, on first and goal, Ledbetter’s pass went through Schrader’s hands and into those of West safety Ben Gray, who, inexplicably, returned the pick out of the end zone. He was tackled at the 4.

The Wolverines managed to get to the 22 where they again chose to go for it on a fourth-and-3. Land and Sehika stuffed the run by Jonas Higson for a loss at the 19.

The Hornets reached the 6 but stalled there. Funk came on to attempt a 24-yard field goal. He had the leg but it was just outside the upright, no good.

West’s best drive of the night came late in the first half, after Anderson’s 21-yard run had made it 21-0. A jet sweep run by Humes picked up a first down then they were bailed out by a pair of pass-interference penalties.

They reached the Bryant 29, but Land stopped Whitlatch for a loss of a yard then McDonald’s pass was intercepted by Schroeder at the 14 with :33 left in the half.

The Hornets got the ball to start the second half and marched 70 yards in seven plays to add to their lead. The big play was a pass over the middle from Ledbetter to Meaders that the receiver turned into a 37-yard gain.

Tre’vun Herron’s catch on a 10-yard strike reached the 2. Adams scored from there. Funk booted it to 28-0.

Miller’s sack cost the Wolverines 14 yards on a third-down play and forced a punt. In turn, the Hornets went three-and-out.

West picked up a first down on a 25-yard pass from McDonald to Humes but sacks on two of the next three plays forced another punt.

The ensuing drive resulted in the mercy-rule lead. In 11 plays, nine of them rushes, they got to the end zone. Anderson covered the last three yards on the second play of the fourth quarter.

The rest of the game was highlighted by Miller’s fumble recovery and the debut of freshman quarterback Cory Nichols during Bryant’s last two series. He rushed for 22 yards on four keepers.

West had one last drive that included three incomplete passes from McDonald including a near interception by Bryant senior Ty Jones.