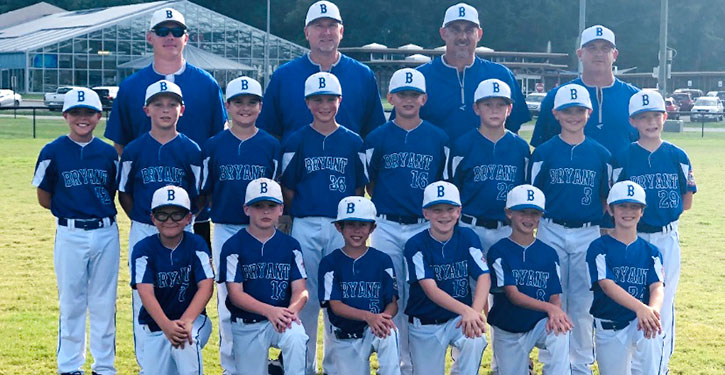 SEMINOLE, Texas — After beating Meridian, Miss., to force a winner-take-all final, the Bryant All-Stars never could get much going offensively on Monday as the Mississippi team won the 2019 10U Southwest Regional championship with a 10-0 win.

Meridian had a pitcher who shut out Bryant on just one hit over four innings. A six-run outburst in the bottom of the first put Meridian in position for the victory. They scored four more in the third to make it a run-rule lead.

It was Meridian who put Bryant in the losers’ bracket with a 5-1 win in the winners’ bracket final. Bryant fought back, however, and forced the tournament’s “if” game.

On Monday, Meridian used two walks, two doubles and three singles to grab the 6-0 lead. With one out, a line drive was snagged by Riggs at short. He threw to third to double off a runner there to end the inning.

The lone Bryant hit was a one-out single by Chalmers in the top of the third. With two down, Riggs walked then a passed ball allowed them to reach second and third before strikeout ended the inning.

Markham had drawn a walk with two out in the second for Bryant’s first base-runner.

A walk, three hits and an error contributed to Meridian’s four-run third.

In the top of the fourth, Hatman was struck by a pitch on a 3-0 count with two out. He took second on a passed ball but a liner to short by Hastings ended the game.