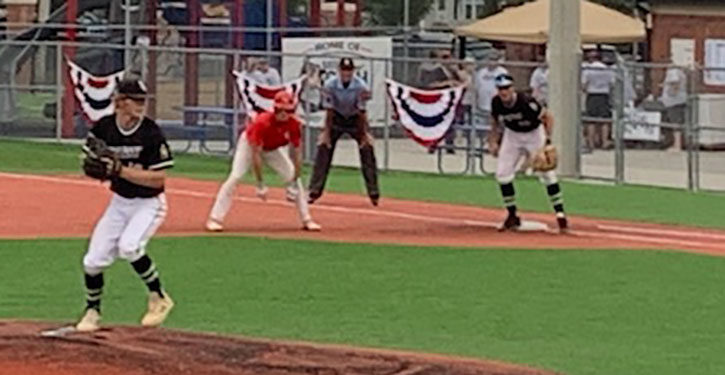 HASTINGS, Neb. — The Bryant Black Sox struck for a run in the top of the first on Thursday night in their second game at the Senior American Legion Mid-South Regional Tournament. Though they had some chances, however, they were never able to add on as right-hander Brandon Smock of Festus, Mo., kept working in and out of trouble by not walking anyone.

Jake Wright made that 1-0 lead hold up through four innings as he blanked the Missourians on one hit. But Festus rallied for two runs in the bottom of the fifth and Smock made it hold up for a victory.

Festus, now 34-11, will advance to the winners’ bracket final against Fremont, Neb., on Friday at 7 p.m. The Sox, now 27-10, will battle to keep their hopes alive against the Texarkana, Texas, Bulldogs at around 4.

Bryant’s run came on a single by Logan Catton, a wild pitch that allowed him to take second, and an RBI know by Cade Drennan. On the off-line throw to the plate, Drennan hustled to second but he was stranded there as Smock settled in.

Wright worked around a one-out single in the bottom of the first then retired the next 11 batters he faced.

The Sox had a golden opportunity to tack on in the top of the third when, with one out, Logan Chambers yanked a triple into the right-field corner. But, by inducing a pop up and a groundout, Smock kept it 1-0.

To start the bottom of the fifth, Festus’ Jake Leitner dropped in a single in shallow left. Eddie Martin then waited out the first walk of the game. Another walk to Charlie Pratt loaded the bases with no one out.

But Wright wasn’t missing by much and Festus was at the bottom of its order, so Wright continued on the mound for the Sox. But eight-hole hitter Isaack Hamilton blooped a single to center to drive in the tying run. Moments later, nine-hole hitter Christian Hancock delivered a sacrifice fly to right on a 3-2 pitch to put his team in front.

Lefty Tyler Bates relieved Wright with runners at first and third. He struck out lead-off man Jacob Bridges as the runner from first was on the move. Drennan, the Sox catcher, fired to second in time for a strike-‘em-out, throw-‘em-out doubleplay.

The Sox had a chance to tie it back up in the top of the sixth when Wright drilled a one-out double to left. Gage Stark hit a grounder to the right side to get him to third but a fly to center ended the threat.

Bates worked around a one-out walk and a single in the bottom of the sixth. Leitner bounced to Noah Davis at second for a force. With two down and runners at the corners, Martin bounced out to Catton at third.

Down to their last three outs, the first two in the top of the seventh were set down. Coby Greiner gave the Sox some hope with a single up the middle. But Smock ended the game with a strikeout.