HOT SPRINGS — For whatever reason, the larger the classification of the teams in a[more] high school basketball game in Arkansas, the more the officials seem to let ‘em play, as they say. Conversely, the smaller the schools involved, the tighter the game is called. 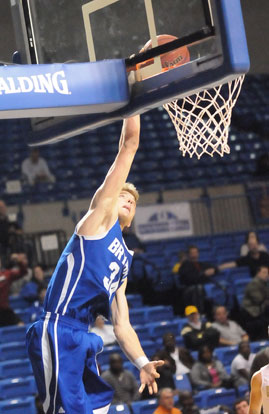 So, when teams from different classifications get tangle in pre-conference or tournament games, one head coach (from the smaller school) invariably complains that the game is too rough while the other head coach (from a larger school) contends that just the opposite.

It’s all a matter of what you’re used to.

Understandably, then, Scott Pennington, head coach of the Class 5A Hot Springs Trojans, was lobbying for more hand-check calls when his team played the Class 7A Bryant Hornets Thursday night in the semifinals of the Summit Bank Spa City Shootout at Summit Arena.

The Hornets were cited for 10 team fouls in the first half much to the frustration of Bryant head coach Mike Abrahamson. With three players in foul trouble including guard Anthony Black, who led the team with 21 points in Wednesday’s win over Malvern, the Hornets maintained, however, establishing the lead and holding a 25-17 edge at the half, sparked by the inside-outside combo of Quinton Motto and Brantley Cozart.

Motto would finish with a career high 22 points and Cozart with 18 as the Hornets, now 7-4, advanced to the Shootout championship game with a 53-39 win. They’ll play for the tourney crown against the Maumelle Hornets tonight at 8:30. 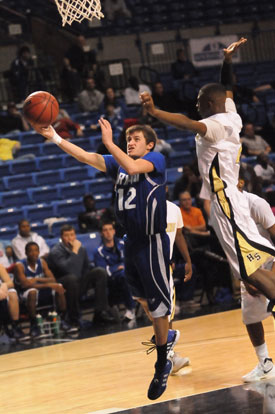 “We were able to win an ugly game in my opinion,” stated Abrahamson afterward. “I say that with admiration for Hot Springs’ effort. I mean they really battled. They played really hard. We couldn’t get shots to fall and they had something to do with that.

“I really liked the shots we were getting,” he added. “We just weren’t able to get into a flow at all. It seemed like we set the record for fouls committed. But our defense carried us through.”

Indeed, the Hornets forced 21 turnovers in the game and out-boarded the Trojans 33-28, which helped make up for 35 percent shooting from the field (19 of 54), well below the team’s recent standards.

As the old saying goes, however, defense knows no slumps.

The Hornets weren’t deployed in a press just to cause turnovers either. With the team’s depth, Abrahamson hoped the active defense would wear down the Trojans. It appeared to work as the Trojans shot well in the first and third quarters but slumped in the second and fourth. 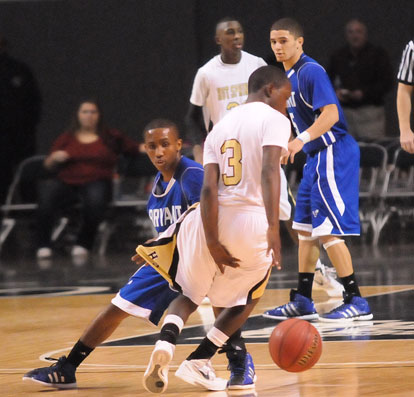 “We thought that was an advantage that we might have,” he acknowledged. “(Hot Springs) is a young team and they’re working on their depth right now. We hoped that (depth) would be an asset for us but we had trouble putting the ball in the bucket.”

All except Motto who converted 10 of 14 shots including a dunk. He added nine rebounds including seven on the offensive end, part of 17 the Hornets collected.

“He’s been playing well,” Abrahamson said of the 6-7 senior. “We’ve been trying to get it to him.

“I thought we played well offensively,” he stated. “We had to adjust to a different type of game, the way it was being officiated. That’s just what you have to do. You have to adjust to it because they’re not going to adjust to us. We’ve got to adjust to them. So I’m proud of them because we couldn’t get into that flow offensively but we grinded it out with our defensive effort. 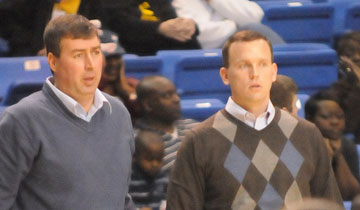 Motto’s 22 was matched by Hot Springs’ Juwan Nero but no one else for the Trojans had more than the 6 that Jeremy Blackmon pitched in.

Bryant broke out to a 6-2 lead with Motto scoring all 6 points including two baskets off the offensive boards. Nero hit a 3 and Collin Holder drove for a bucket as Hot Springs surged to a 7-6 lead.

Bryant’s Jordan Griffin and Nero traded 3-pointers but when Cozart canned a triple with 3:44 left in the opening quarter, Bryant was head to stay.

Trailing 14-10 going into the second period, Hot Springs managed to tie the game at 14 then at 17 but couldn’t get over the top. A driving jumper by Cozart snapped the latter deadlock with 4:19 left in the half. Motto blocked a shot and, with 3:25 left, Cozart was fouled on a 3-point try. He converted two of three shots to extend the advantage.

Hot Springs missed chances to trim that down but twice missed the front ends of bonus chances at the line. So when Motto got a stickback and Griffin hit two free throws after a steal by Cozart, Bryant led 25-17 at the break.

Nero and Blackmon scored the first two baskets of the second half to trim it to 25-21 and the Trojans had a chance to get closer only to have Cozart take a charge for the second time in the game. Moments later, Motto hit a turnaround jumper from close range.

The Hornets forced a turnover that Jalen Hewett turned into points by crashing the offensive glass. Another turnover led to a layup by Motto off a nice pick-and-roll with Black. With that, the Hornets had their first double-digit lead at 31-21.

The Trojans wouldn’t go away, however. They had cut the lead to 33-27 with 1:32 left in the quarter before Cozart canned another troika then added a driving scoop that bumped the margin to 38-27 going into the fourth quarter.

Motto scored the Hornets’ first 6 points of the final period hitting the offensive glass for the first, taking a nice dish from Cozart for layup then sending down his dunk despite getting fouled in answer to a 3 by Nero.

Bryant spread the floor and Black got to the line for a pair of free throws. After Nero sank a pair, Motto, hustling down the baseline, took another dish from Black and converted a reverse layup to make it 48-36.

And when Black and Cozart added free throws, the Hornets had their largest lead at 51-36 going into the final minute.