Players in the 7A/6A-Central Conference who like to take it to the rack, must[more] beware when they’re facing the Bryant Hornets. That’s partly because Bryant’s defense is anchored by a 6-7 post, senior Quinton Motto, who can block shots. But to make it even more treacherous for Bryant opponents, Motto leads the team is taking charges as well. 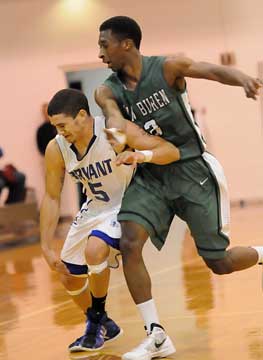 On Tuesday against the Van Buren Pointers, Motto, who recently drew four charges in a game, blocked nine shots while scoring 10 points and collecting a team-high six rebounds as the Hornets avenged a loss earlier this season with a 57-40 win.

Bryant was led by guard Brantley Cozart with 16. Anthony Black finished with 9, while Jordan Griffin and Marcus Wilson added 8 each.

“He did a great job of being big, offensively and defensively, which is something that we talk about consistently,” said Hornets head coach Mike Abrahamson regarding Motto. “From a defensive standpoint, obviously he’s great at taking charges, leads our team in charges, but he can also block shots which makes him very difficult when you take it in there because you don’t know what he’s going to do.

“What I liked about his blocks is that, he was straight up,” the coach continued. “He wasn’t coming down a lot. He got the kind of blocks that you could save, that stayed in play, that we could get back, which is nice. He’s not going for the highlight, you know, throw-it-off-the-wall blocks.

“Offensively, I was really happy with how we’d throw it in to him, he’d keep it up high and take his time and turn around and go over and use his size on the offensive end too, which is something we’ve talked about ever since I’ve known him,” Abrahamson stated. “He really had a good game. I’m so proud of him. He works hard. He’s got a great attitude. You can tell he really wants to win.”

Improving to 5-4 in the league, the Hornets moved up to third place going into a trip to play the top team in the conference, Russellville, on Friday. Now, with Little Rock Hall and West Memphis taking the place of Russellville and Van Buren (both of which will play at the Class 6A level in the post-season) third in the conference may translate to fourth or fifth in the seeding for the State Tournament.

In the meantime, the Hornets won their third straight, scoring 57 points while attempting just two free throws in the whole game. They hit nine 3-pointers and shot 51 percent from the field (23 of 45) while turning the ball over just 10 times.

Those were considerably different numbers than when the Hornets went to Van Buren on Jan. 10, coming off a tournament championship and a conference-opening win only to be stunned by the Pointers, 51-47.

“We handled their pressure a little bit better,” Abrahamson related. “They were just in full-court man but they really get up in us. Last time, we turned it over 20 times. We knew we couldn’t do that this time.

“We knew they were going to shoot it and we had to make it hard on them,” the coach continued. “They missed some open shots but they also missed some contested shots. 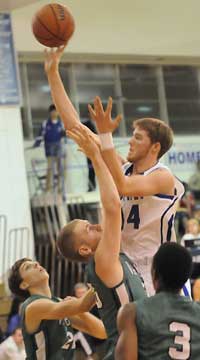 “We knew they’re perimeter oriented,” he mentioned. “And we knew they were going to be aggressive. It was important, on defense, just to have that sense of urgency, to be able to guard them off the bounce but also to be able to guard them on the shot. And that’s difficult because they’ve got guys that can do both. The key to that was help and recover early — give early help and quick recovery and that’s a lot easier said than done. For the most part, I thought we did a pretty good job of that, just trying to make it hard on them.

“We rebounded well in the second half and, offensively, just ball movement, getting open shots and being ready to catch and be a threat was key.”

Bryant never trailed after Brantley Cozart drained a 12 foot jumper to break the ice about a minute into the game. Van Buren’s Tyler Pearson hit a free throw then Motto and the Pointers’ Ben Lanier traded baskets, making it 4-3.

The Hornets then went on a 10-0 run that started with a nice bank shot from about 10 feet out on the right side by Griffin. Motto made a steal and it resulted n a 3-pointer by Cozart and a timeout fo the Pointers.

When play resumed, Cozart made a nice feed to Black for a layup. That got the sophomore guard on track after he’d misfired on three straight 3-point tries.

Van Buren turned it over and Griffin found Black in the corner and, this time, his 3’s found nothing but cord. 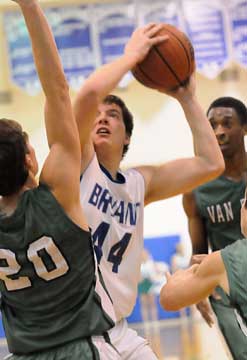 “They laid off Anthony early in the game and he missed his first couple,” Abrahamson noted. “He was really thinking about his shots. We just encouraged him to keep going and don’t think about it. ‘If you’re open and it’s a shot that we want, you let it fly.’ He got one then they switched and put another guy on him, kind of changed the way they wanted to guard us and it opened up some other things.”

Van Buren rallied, however, after Tyler Pearson got a 3-pointer down. Bryant’s lead was whittled to 14-12 by the end of the period.

Cozart ripped another troika to start the second quarter but Colton Tucker answered in kind for the Pointers. Wilson pumped in a 3 but, still, with 2:14 left to play, Van Buren had trimmed the advantage to 22-20.

But Bryant ended the half strong. Griffin scored off the offensive glass then Logan Trudell knocked down a 3-point bomb so, when Motto beat the buzzer with a reverse layup, the Hornets held a 29-20 advantage.

And when Black fed Motto for the first bucket of the second half, the lead was up to double digits.

Lanier hit two free throws but then Cozart dished to Motto for a short jumper and, moments later, buried a 3 to make it 36-22.

After a timeout, Quinton Ray’s 3 was answered by a driving jumper by Black. Lanier hit a 3 then so did Wilson. Deven Goodwin drove for a bucket to make it 41-30 going into the fourth quarter.

The Pointers were stuck on 30 for a while. In the meantime, Trudell opened the gates for Bryant’s clinching surge by dropping in a 3. Before Van Buren could score again, the Hornets had expanded the lead to 53-30. Cozart capped the run with a 3-pointer, a steal and a layup to make it 53-30, the largest lead of the night with just under three minutes left to play.

Lanier led the Pointers with 11 points, Goodwin had 10.