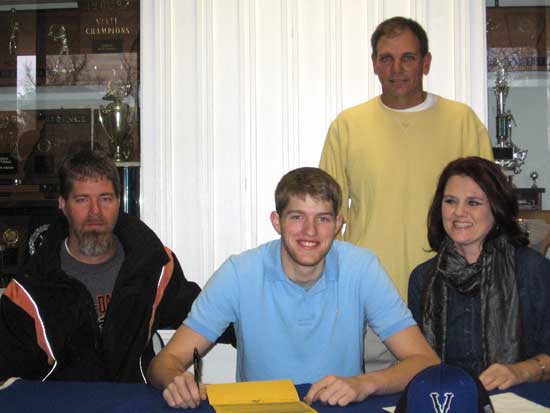 Something clicked for Quinton Motto last summer and the right[more] people noticed.

On Wednesday, Motto, a senior at Bryant High School and the son of DeMar Motto and Dana Matthews, signed a letter of intent to continue his education and baseball career at Vernon College in Vernon, Texas.

“I am very excited to sign Quinton,” said Kevin Lallmann, head coach of the Vernon College Chaparrals. “He is a talented player and an outstanding young man. He will be a quality addition to both our program and our community.”

“I went to New Mexico two summers ago and talked to one of the coaches that my dad played with,” Motto related. “We went and visited with them and they watched me throw. I threw a bullpen and they liked what they saw.”

This past summer, Motto was invited to play in a summer league that included some college players in Farmington, N.M. The team, the Strike Zone Cardinals, posted a 25-9 record going into the tournament. There they won three games before running into the eventual champion, Midland Redskins.

“It was Connie Mack so kids from all around the country came and played,” he recalled. “We went to Colorado and Georgia and played in tournaments. We qualified to play in the Connie Mack World Series and ended up coming in third.

“I had a good summer,” the right-hander said. “I had the most strikeouts in on summer that I’ve ever had.”Lallmann followed up with the scholarship offer.

“He said he liked what he saw and that I have a lot of potential,” Motto recalled. “He said he’d like for me to work with him a lot more.”

“Vernon’s getting a guy that has really excelled over the past summer,” noted Bryant Hornets baseball coach Kirk Bock. “His velocity really jumped up and Vernon’s nabbing him. He’s probably a diamond in the rough. A lot of people haven’t been on him so I think they’re going to get something very special. This summer, he was used as a starter and when he was in Dallas (for a tournament) really did a good job. So I think they’re bringing him in as a starter.

“He works hard,” Bock continued. “Right now, he’s probably throwing somewhere in the upper 80’s. He’s 6-7 so you can project him out to throwing 90, 92 within a year or so. So, if he continues to get better like that JUCO won’t be his last stop. He’ll probably get drafted coming out because he’s got something that you can’t coach and that’s that size. He’s kind of a skinny 6-7. Whenever he gets into college and possibly pro ball, they’re going to put another 40 pounds on him and that will help him do real well.”

Motto is also a two-year starter on the Hornets basketball team. This season, he’s had a career-high 22 points in a game and as many as 16 rebounds.In college, he plans to study Business.