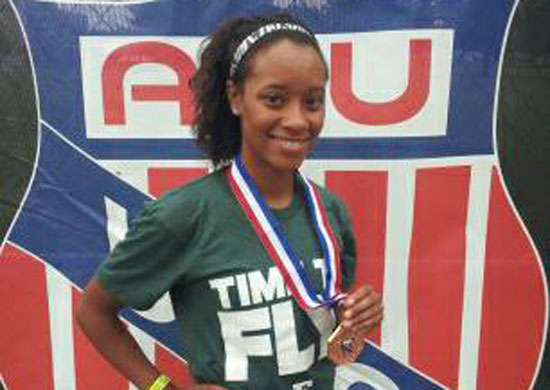 YPSILANTI, Mich. — Melinda Murdock, a senior at Bryant High School, placed seventh overall and received a medal for her performance in the 800 meter run at the 2013 AAU Junior Olympics July 28-Aug. 3 at Eastern Michigan University.

It was the second time Murdock has competed at the Junior Olympics and the first time she’s reached the finals in an event.

“This year I was more prepared and trained harder than last year to get myself ready for the Juniors,” Murdock said. “Last year, I let the big stage of the Juniors get the best of my nerves.

“Plus this year I put together a much better run plan with my Bryant coach Danny Westbrook,” she added. “I knew strengthening myself for the final lap of my events was important. So all this summer leading up to the Junior Olympics, I added J.J. Meadors, a personal trainer from Salt County Performance to help me get me over that hill.

Murdock also ran with her Team Elite relay teams in the semifinals but both fell short of the finals.