This date in Bryant athletic history: 2009 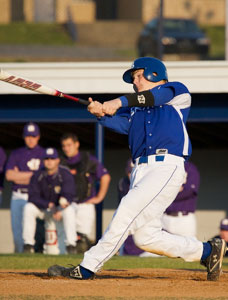 BRYANT, Ark. — The thought crossed the mind of Bryant Athletic Director Tom Farmer, and he admitted it. Maybe it would be best to save his presentation to Hornets baseball coach Kirk Bock for another day. He’d put together a plaque noting Bock’s selecton as one of just three National Federation Coaches Association awards as the 2008 Sectional Coach of the Year in baseball last season when he led the Harrison Goblins to a Class 5A State championship.

He had planned to make the presentation before the Hornets’ game against the Van Buren Pointers, in part, because Bock spent several years coaching at Van Buren before moving to Harrison and, subsequently, to Bryant. But with storm clouds looming and rain in the forecast, the game started 25 minutes early in hopes of getting it in before anything hit so Van Buren’s long trip to Bryant would not have to be repeated.

So, the A.D., after supervising all the bus routes with his other hat on (Transportation Director), had not yet arrived at the ballfield when the game got underway.

No problem, he said. He’d just make the presentation after the game. His second thoughts occurred, however, when the Pointers built an 8-1 lead going into the bottom of the third.

It was 8-2 going into the bottom of the fourth when Farmer turned to assistant principal Bill Withers and said, “It’s not going to be a problem. This is going to be a big inning.”

Yes, he called it. The Hornets proceeded to rip nine hits including eight in a row, scoring nine runs to overtake the Pointers and, behind the bat-silencing relief pitching of senior Tyler Sawyer, surged to a 15-8 victory to retain their share of second place in the 7A-Central Conference.[more]

The Hornets improved to 12-5 overall and 7-3 against the league. They were set to host the rival Benton Panthers in a non-conference contest on Monday, April 13, then return to league play at home against Russellville on Tuesday and at Conway against the red-hot Wampus Cats on Thursday, April 16. The Cats have won five conference games in a row including a 5-3 win over first-place North Little Rock Thursday night. North Little Rock still leads the league at 6-2 with Bryant, Little Rock Catholic (6-3) and Conway (5-3) a game back in the loss column.

“This was huge,” Bock stated after the game. “We dropped two then we won two. Now we’re focused up on Russellville and Conway. And Conway’s a very, very good baseball team. They just happen to be young. If we don’t go over there and swing it like we did tonight, it’s going to be tough. But our mindset is, we’re winning every game no matter what happens.”

Bryant finished with a season-high 18 hits including five for extra bases against Van Buren. Senior Justin Blankenship was 4-for-4 and a home run short of the cycle. Sawyer added three hits as did sophomore Hunter Mayall. Kaleb Jobe had two hits extending his hitting streak to eight consecutive games. All nine Bryant starters had at least one hit.

“We got one that inning,” he recalled. “Then we got nine. I didn’t think we’d get to there but it’s like, once we get on a roll, it’s kind of like Conway and kind of like what Monticello did to us. You get on that roll and you start believing it. JB and Jobe and Tyler all did an excellent job, just senior leadership.

“And we got Tyler back on the bump with an attitude,” the coach noted. “Win, lose or draw, that was worth it right there. He’s still not where he was but he’s fighting back right now and that’s good. That’s the best thing.”

Sawyer had been roughed up a bit in his previous two starts. The Hornets ace improved to 4-2 on the season, scattering four hits and fanning five in 4 2/3 innings of relief. Junior right-hander Ben Wells got the start and eased past the first two hitters before Van Buren’s Tyler Spoon worked the count to 3-2 then fouled off a trio of pitches before earning a free pass. He scored all the way from first on a long double by David Ostrander and, after a single by Brandon Moore, Ostrander came home when Moore got into a rundown between first and second on a pick-off play.

The Hornets got a run back in the bottom of the inning off lefty David Myers. Caleb Garrett was hit by a pitch, was sacrificed to second by Garrett Bock and scored on Mayall’s liner to center for a base hit.

Wells eased through a 1-2-3 second using just nine pitches then retired the first batter in the third. But he hit Preston Warren. Spoon’s bouncer to third was booted and Ostrander walked to load the bases for Moore who crushed a drive to deep left-center for a three-run triple and a 5-1 lead.

Sawyer relieved and got DH Alan King to bounce to second but the ball was misplayed and King reached as Moore scored. Logan Meadors singled to right and took second on a late throw to third where King pulled in. Myers doubled to left-center to make it 8-1 before Sawyer struck out Camden Pense and got Logan Patterson to fly out to center to finally end the inning.

After that, the Pointers’ lone hits were an infield single by Ostrander with two out in the fourth and a two-out triple by Warren in the sixth.

The Hornets chipped a run off the lead in the bottom of the third thanks to a two-out single by Mayall that was misplayed in the outfield. Blankenship had led off the inning with a liner to center for a single but was still at first after two were out as Mayall came to the plate.

The fourth inning began with Sawyer’s solid single to right. Brady Butler sacrificed him to second and, when Brennan Bullock’s infield hit on a roller to short, drew a wild throw to first, Sawyer scored to make it 8-3.

That’s what started the barrage. Tyler Brown belted a double to center to trade places with Bullock. Myers gave way to right-hander Jacob Gatling but he was greeted by Blankenship’s blast that bounced high off the fence in front of the scoreboard in the farthest reaches of right-center. An RBI triple was the tangible result. The intangible result was the excitement that began to take hold in the Bryant dugout.

Garrett followed with a single to bring Blankenship home, making it 8-6. Bock beat out an infield hit, sprinting to the bag ahead of Gatling who had fielded his roller to the right side in front of Moore, the first baseman, who had come off the bag to get in position to field the ball had Gatling not gotten to it. Mayall lashed a single to center and Garrett beat the throw to the plate as Mayall reached second and Bock third. Jobe, the ninth man to bat in the inning, ripped an 0-1 pitch for a two-run double and the Hornets were ahead 9-8.

Moore, whom the Hornets beat 5-3 in Van Buren earlier this season, became the third pitcher for the Pointers but he was greeted by Sawyer who’s shot to center hit the base of the fence for an RBI double. Jonathan Wade, running for Sawyer, picked up a base on a wild pitch. And, when Butler hit a bouncer to short, Wade came down the line, made sure Ostrander was throwing to first, then took off for home. The relay home from Moore appeared to be in time but Wade slid around the tag and got in for the ninth run of the inning.

The Hornets put the finishing touches on the win with four more in the sixth against Spoon. Consecutive one-out singles by Jobe, Sawyer and Butler loaded the bases and, with two down, Brown singled in two. A wild pitch moved runners to second and third before Blankenship parachuted his fourth hit to no-man’s land in shallow center, plating two more.

After Sawyer set down the side in order in the top of the seventh, closing with a strikeout of King, Coach Farmer, happily, made his presentation.