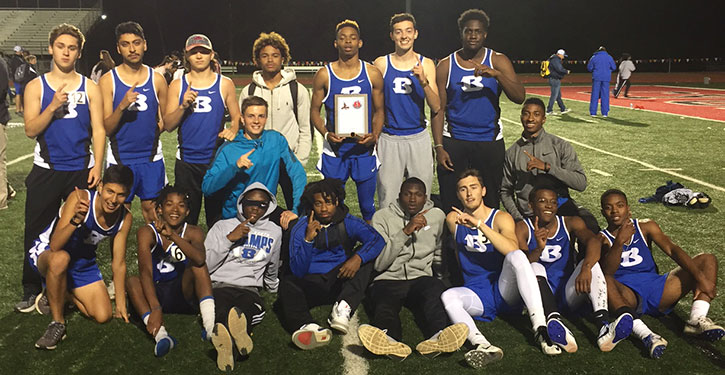 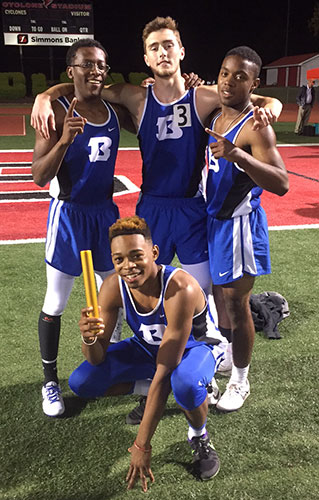 Bryant 4×400-meter relay team turned in the best time in the state so far this season.

RUSSELLVILLE — The Bryant Hornets put together a complete team performance to capture the team championship at the 62nd annual Russellville Cyclone Relays on Friday night. The Hornets scored 107.5 points to earn the title over runner-up Conway (84 points). Cabot (68), North Little Rock (61), and Benton (58) rounded out the top 5 teams.

The meet was highlighted by the Hornets’ 4×400-meter relay team of Josh Robinson, Malik Dockery, Diante Woodson and Landon Abernathy who not only won but turned in the best time in the state so far this season at 3:26.13. It also was a State meet qualifying time. Cabot was second with a time of 3:29.38.

“That was, without a doubt, our best overall performance so far this season,” said Hornets head coach Steve Oury, regarding the meet championship. “It’s a real honor to win the Cyclone Relays, which is one of the most prestigious meets in the state of Arkansas. We had numerous athletes stepping up and setting personal records and earning valuable points. The fact that we only placed first in one event drives home the importance of the team concept. I’m really proud of our boys’ attitude and work ethic.”

The 18-team meet included seven Class 7A schools. In addition to Bryant, Conway, Cabot and North Little Rock, Rogers and Rogers Heritage were on hand along with Van Buren.

“I though John Carder’s effort in the 3200 was phenomenal,” Oury said. “He and Noah Eskew of Jessieville put on a show.”

The 4×100 relay team of Mackenzie Martindale, Andre White, Woodson and Randy Thomas also turned in a State qualifying time of 43.11. They placed second only to North Little Rock at 42.75.

Robinson picked up second-place points in the high jump, clearing 6’2”. Benton’s Brandon Hunter edged him out for first, clearing 6’3”.

“It was great to see both the 4×100 and 4×400 relay teams pick up state meet qualifiers,” Oury noted. “I was also very happy to see Josh Robinson break through with a big personal record in the high jump.”

Robinson was also eighth in the triple jump, covering 39’4”.

The Hornets also picked up second-place points from Landon Abernathy and Madre Dixon. Abernathy earned second in the 300 hurdles with a time of 39.55, right on the heels of Conway’s Kevin Holder at 39.35.

Brandon Murray scored in both the long jump and the high jump. His long jump of 19’9” was good for seventh while his high jump of 5’10” tied for eighth.

The Hornets will be back in action Tuesday in Sheridan.