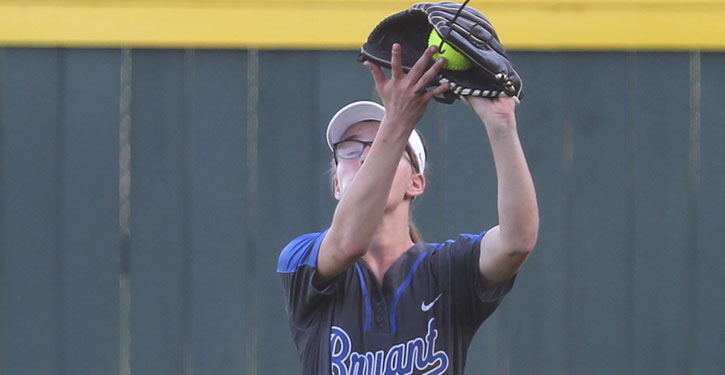 The Bryant Lady Hornets absorbed their second 6A-Central Conference setback in the last week on Tuesday night as the Conway Lady Cats took advantage of seven errors with 15 hits including three home runs to outslug the Lady Hornets 16-9.

Emily Cecil had a grand slam as one of the third Conway blasts as part of a game-breaking nine-run fourth. The teams were even 4-4 going into the fourth. Bryant rallied but when Conway tacked on in the fifth and sixth innings, the hill proved too high to climb.

Both teams scored a run in the first. For Conway, T’Yauna Rector tripled with one out and Jordan singled her in. Bryant pitcher Hannah Work retired the next two on grounders on the infield to keep it at that.

For Bryant, LaCerra drew a one-out walk, stole second and scored on a two-out single by Bella Herring. Dillon singled but Conway pitcher Shelby Reed got Haleigh Beck to fly to center to end the threat.

Madeline Bruce got hit by a pitch to start the second. She scored on Mallory Hopper’s double. Hopper moved to third on Madi Schichtl’s grounder to Herring at second then scored when Cecil grounded out to Maddie Thompson at short.

Harris reached on an error that extended the inning, stole second and scored on an errant throw.

Down 4-1, the Lady Hornets got a run back in the bottom of the inning. With two out, Heather Hammett reached on an error, racing all the way to third on the bad throw to first. She then stole home.

Work pitched around a single and an error in the third to keep it 4-2 and, in the bottom of the inning, the Lady Hornets rallied to tie. LaCerra singled but was caught trying to steal second. Bowers reached on an error, however. She scored from second on a double by Herring. And when Dillon’s grounder to second was misplayed, Herring scored to make it 4-4.

An error and a bunt single started the fourth-inning onslaught. Jordan hit a three-run homer after a second Bryant miscue. Teague followed with a solo shot.

Christine Mefford relieved for Bryant after a single by Reed. She retired Bruce but Hopper singled and another error followed to load the bases for Cecil, who clubbed the grand slam to make it 13-4.

In Bryant’s fourth, Lexi Helton led off with a double to right. Courtesy runner Sheyana Shamlin took third on Joely Calhoun’s groundout and scored when Hammett singled. A bunt hit by Thompson and another by LaCerra loaded the bases for Bowers, who picked up an RBI with a groundout to second.

It was 13-6 going into the fifth. A pair of walks set up a chance for Conway to add on. With one out, Hopper blooped a ball into left. LaCerra charged in to field the ball and got a force at second. Hopper rounded first too far and got caught in a hot box. Though the lead runner scored, the Lady Hornets tagged out Hopper to end the inning.

Dillon doubled to lead off the home fifth. With one out, courtesy runner Avari Allen stole third. She then tagged on Helton’s fly to Harris in center, but the throw home was in time, preventing the run and ending the inning.

A walk, a triple by Harris and a single by Jordan made it 16-6 in the top of the sixth inning. The Lady Hornets avoided the run rule by scratching out three runs in the bottom of the sixth when Bowers followed singles by Thompson and LaCerra with a three-run bomb.

Conway was set down in the top of the seventh but, despite a walk to Beck, the Lady Hornets were unable to rally in the home half.

Bryant travels to Fort Smith Northside on Friday then hosts Rogers on Saturday.