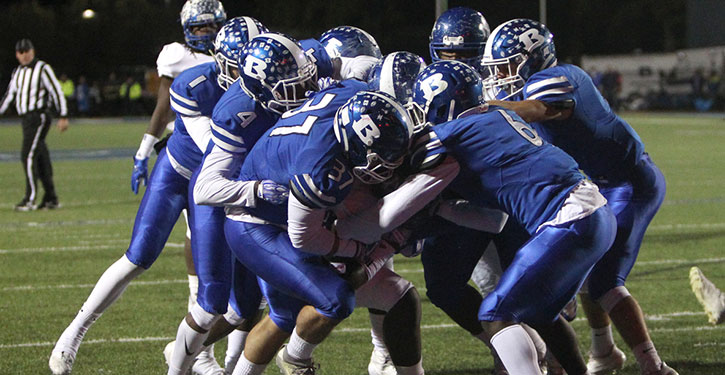 No. 2 North Little Rock knocks off No. 1 Hornets with second-half performance 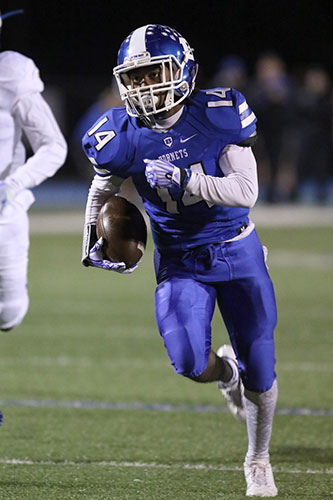 Yes, it was the Game of the Year.

But there are bigger, more important games ahead for the Bryant Hornets as well as the North Little Rock Charging Wildcats. First, there’s a trip to Conway for Bryant next Friday and to Cabot for North Little Rock next Thursday. Then there’s the playoffs where each game is bigger than the last, when the season hangs in the balance every time you take the field.

No, the No. 1-ranked Hornets didn’t win the Game of the Year (so far). Second-ranked North Little Rock did, 25-14. The Charging Wildcats out-scored the Hornets 12-0 in the second half after Bryant led at the intermission 14-13.

“They just took our passing game away,” said Bryant head coach Buck James. “We didn’t catch the ball down the field. We had some good run plays but we also had a lot of run plays where we only got one or two yards.

“We never got any kind of momentum,” he noted. “We had three three-and-outs. We had terrible field position. The wind was a big key in the third quarter because it was obviously easier for us to move the ball with the wind at our back.

Indeed, North Little Rock’s Deante Montgomery caught two touchdowns passes, each in a crowd including a leaping grab on a 50-50 ball in the end zone that proved the be a clincher for the Cats, creating the first two-score lead for either team on the first play of the fourth quarter. 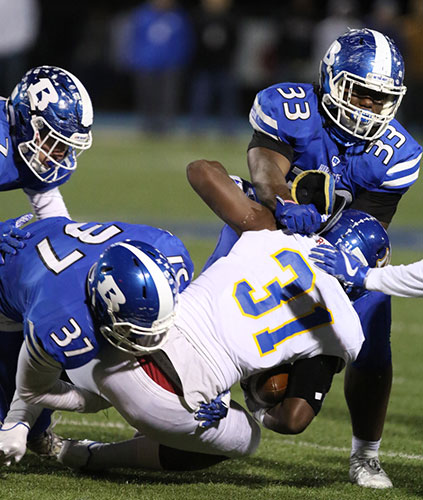 “At the end of the day, they made plays and we didn’t,” James stated.

Still, it was a far cry from the two shellackings North Little Rock handed the Hornets in 2016 including the 46-13 decision in the State semifinals.

“We’re better,” James asserted. “And, I thought, going into this, offensively, they were every bit as good as they were last year. They play well. Those guys execute.

“They have a good football team and we knew — we told our guys at halftime, we would have to come back out in the second half and play just as hard if not harder to win the game because champions die hard. Teams that expect to win, you really have to keep your thumb on them the whole time and make plays.

“But I’m proud of our kids and the way they competed,” the coach added. “We played with heart and character. We’ve just got to clean up some little disciplines to help our football team be successful in a big game like that.

“We’re closer than probably the score indicates. But that’s for people to talk about in the coffee shops. Our kids played hard they just didn’t play well at times. I hope that they learn from it, that we’ll become a better football team because we played this game.”

History has shown that there have been many teams who lost to their top competition in conference play then turned the tables and avenged that loss in the (more important) playoffs. If Bryant can win at Conway and get the No. 2 seed from the 7A-Central Conference and a first-round bye, they would have a chance to forge a rematch in the State title game.

“Next week, now, is a bigger game than this one was,” James acknowledged. “If we want a home playoff game and maybe a bye where we could get some injured players back and have a chance to play at home for a little bit. That would make a huge difference. Then we’ve got to turn around and get ready for the playoffs. 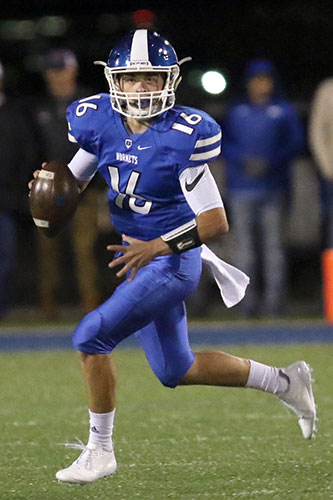 “This team has nothing to be ashamed of,” he asserted. “They still can make a run for a State championship. There’s no doubt about it. If (North Little Rock is) the best team in the state, which I bet you they’re pretty close to being, then we’re not that far behind.”

Most of the game was a defensive war. North Little Rock had two punts and an interception by Bryant’s Andrew Hayes on its first three possessions. Bryant punted on its first two series but, thanks to a short North Little Rock punt against the stern wind out of the north, got good field position following the Wildcats’ second punt.

From their own 40, the Hornets had a key third-down conversion when sophomore quarterback Jake Meaders passed to running back LaTavion Scott for 14 yards. A play later, Meaders found Brandon Murray on a post route for a 45-yard touchdown pass.

It was Murray’s 10th TD reception of the season but it would prove to be his only catch of the night. He came out of the game late in the half with a concussion.

Martin Ramirez kicked the extra point and the Hornets led 7-0.

And the Hornets forced another North Little Rock punt but, during that possession, the quarter changed and, though the officials initially didn’t have the teams switch ends, eventually the Wildcats got the wind for a Nicholas Burks punt that pinned the Hornets inside their 20. Despite an 8-yard run by Scott on first down (which put him over the 1,000-yard mark for the season), the Hornets were unable to pick up a first down.

Against the breeze, a short punt gave great field position to North Little Rock at the Bryant 48. That set up a 28-yard touchdown pass from David Chapple to Montgomery in the back of the end zone when it looked like the receiver was well covered. 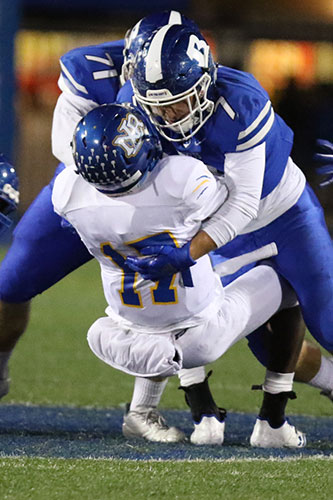 After another Bryant punt — this time, Cameron Vail’s kick, despite the wind, pinned the Wildcats at their own 18. The Wildcats drove to midfield behind a strong push from their offensive line and the running of sophomore Brandon Thomas. Chapple, who was just 7 of 19 passing with two interceptions in the game, almost got picked by Hayes again. With a leaping attempt, Hayes could only get one hand on the ball. It ricocheted right to Montgomery and wound up a 31-yard completion. Thomas dashed 20 yards for the touchdown on his way to 185 yards on 24 carries in the game, the most any back has picked up this season against the Bryant defense.

A bad snap on the extra point attempt resulted in Chapple throwing into the end zone for a two-point try but Bryant linebacker Nick Smith knocked it down leaving it 13-7 with just 1:47 left in the half.

The fans and coaches for Bryant got riled up on Bryant’s responding drive as physical plays by the North Little Rock secondary failed to produce interference penalties. The Hornets came up with a big play from their own 29 when, with the blitz charging through at Meaders, he completed a screen pass to Josh Robinson that broke for 38 yards.

Three incompletions followed with Bryant folks clamoring for interference penalties on a couple of them including a blow to the head of Murray that forced him from the game.

On a fourth down, another pass fell incomplete but, this time, the interference was flagged, keeping the drive alive.

A play later, another interference penalty gave Bryant a first down at the 8 in the final seconds of the half. Meaders found Luke Curtis in the end zone for a touchdown with :04.8 showing on the clock and, with Ramirez’ extra point, Bryant was back on top 14-13.

Bryant’s Tamarion Wilson recovered a squib kick on the ensuing kickoff but there was only time for one play and Meaders was sacked.

With that momentum, the Hornets were set to get the ball to start the second half. Instead of adding to their lead, however, they went three-and-out.

In turn, the Bryant defense stepped up as Antonio Rice intercepted a fourth-down pass.

The Hornets regained possession at their own 13 but, despite a 21-yard burst by Scott, couldn’t take advantage.

The teams continued to trade punts until, against the wind, a Bryant kick only went 11 yards, giving North Little Rock great field position at the Hornets’ 30. On the second play of the series, Chapple found Erion Cooney at about the 10 and he beat the Hornets to the corner for a touchdown.

A two-point try failed again so the Hornets only trailed 19-14.

Bryant responded with a drive featuring Scott, who dashed 16 yards on the second play. The Hornets reached the North Little Rock 44 but, on a third-and-1 there, North Little Rock linebacker Dwain Hunt dropped Scott for a loss.

Looking to play field position against the wind, the Hornets punted and Vail produced by pinning North Little Rock at its 10.

That led to the back-breaking drive. A 35-yard run by Thomas then a (hotly protested) pass interference penalty against the Hornets sparked the march that was capped by Montgomery’s circus catch from 30 yards out on the first snap of the fourth quarter.

Another try for two failed.

The Hornets responded by driving to the Cats’ 18, sparked by a 27-yard run by Vail in the Wildcat that converted a fourth-and-1. Scott picked up 2 yards to the 16 then a pair of passes fell incomplete, including a drop inside the 5. Ramirez came on to try a 34-yard field goal with the wind in hopes of cutting it to a one-score lead. Though he had plenty of leg, the kick sailed wide left.

The defense got the ball back with 7:54 left to play but the Hornets frustrations mounted further. They went three-and-out and punted it back to North Little Rock. The Charging Wildcats, from their own 13, then ate up clock with their ground game driving to the Bryant 37. They got the ball with 6:45 left. Bryant got it back with just 1:13 to go.

On top of that, Burks’ punt was downed at the 1; too far to go, with too little time. 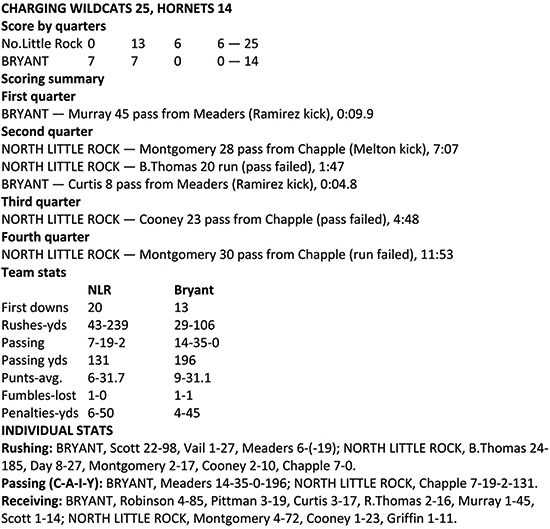