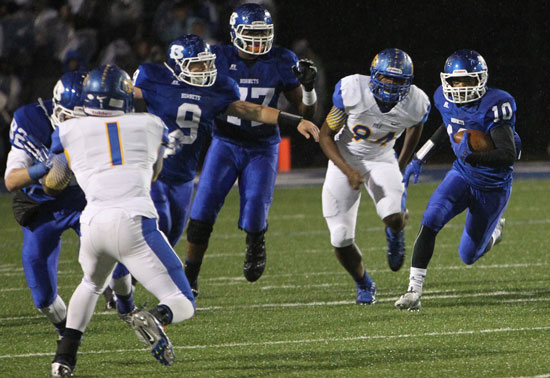 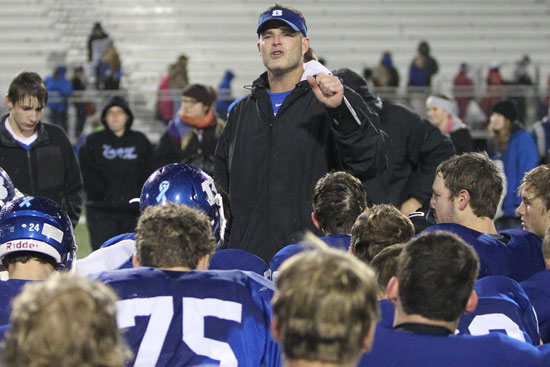 A season that included the joys of winning another Salt Bowl going away, stringing together 17 consecutive quarters without giving up a point, and victory in a regular-season finale that garnered a conference championship wound up being bookended by losses to Conway and North Little Rock. Those are two of the last four teams standing in the Class 7A State playoffs. 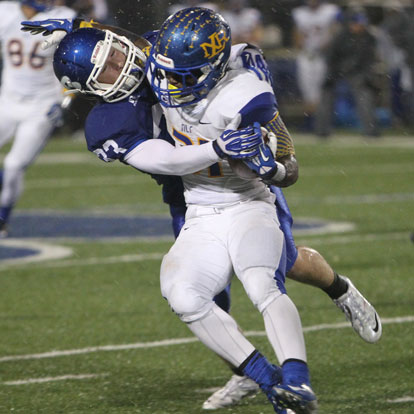 But, in the 21-3 loss to Conway, the Hornets never really seemed to be in the game while, in the 28-7 loss to North Little Rock, they never were out of it until the fourth quarter.

The clincher for North Little Rock was an 88-yard scoring drive in nine plays to start the final period, fueled by the running of Deon Tidwell. That gave the Charging Wildcats a 14-point cushion, 21-7 with 8:45 left in the game.

On a cold, rainy, miserable night, 14 points was a steep hill to climb. A late score by North Little Rock produced the final tally. Tidwell capped off an incredible performance with his lone touchdown. He rushed 42 times for 343 yards in the game.

“I thought our defense played great,” stated Hornets coach Paul Calley. “We had trouble tackling (Tidwell). He is a very, very, very good running back, great vision. He accelerated so fast. He was real patient. He’d slide, slide, slide then all of sudden he’d explode through. We had people there. We just couldn’t tackle him.

“To stay in the ballgame as long as we did, as close as we were and he had 300 yards rushing, that says something about our defense,” he added. “And we left them out there too much in the second half.” 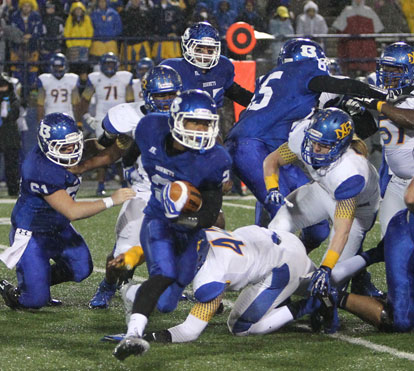 Brushawn Hunter tries to turn the corner off of blocks by Kurt Calley (61) and Jacob Ward (65). (Photo by Rick Nation)

The Hornets racked up 269 yards rushing themselves with both quarterback Devonte Howard and running back Brushawn Hunter breaking the century mark. In fact, the game may have turned early when twice the Hornets fumbled the ball away when they were in scoring range. A wind-blown field goal attempt failed as well or they might’ve had a 17-7 lead at half instead of a 7-0 deficit.

“I felt like, as the game went on, it’d be tougher and tougher to run the ball,” Calley said. “I felt if we could score early, it would really help us with the momentum. The two turnovers were costly. We’re moving the ball, got down there again and missed a field goal. We just couldn’t seem to finish the drive.

“All year we’ve played much better when we had a lead,” he noted. “I thought we handled it so much better tonight when we did fall behind. I told the kids before the game, if we can be in it at halftime, if we’re within two scores, we’ll have a chance to win.” 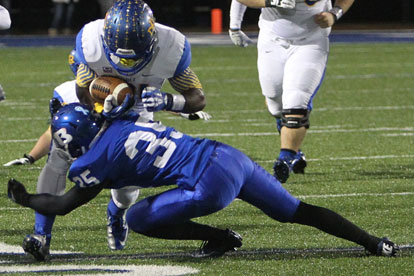 Jake Johnson (35) makes a tackle for the Hornets. (Photo by Rick Nation)

A 70-yard touchdown run by Hunter on the second snap of the third quarter pulled the Hornets even 7-7. The Bryant defense made a big play on North Little Rock’s subsequent possession. After driving from their own 22 to the Bryant 35, the Charging Wildcats faced a third-and-2. A low snap to quarterback Heath Land killed the timing of the play. Land scrambled and dumped a pass off to fullback Xavier Crosby but the Hornets were there to drop him for a 9-yard loss.

So, after just tying the game, Bryant was getting the ball back on a punt.

The Hornets got it at their own 15 and wound up coming up a yard short of a first down. Bryce Denker turned the field position around with a punt that hit and rolled all the way to the North Little Rock 16, a 60-yard punt.

Just when it seemed that the Hornets had Tidwell slowed down, North Little Rock inserted safety Payton Holmes in at quarterback and started running him as a change of pace. He converted an early third-down play during the possession then appeared to break a 67-yard touchdown run. 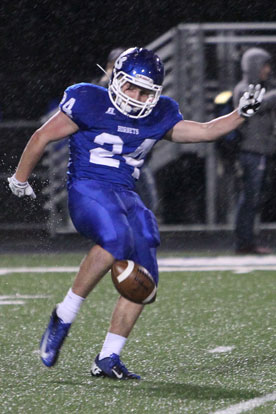 But the Charging Wildcats were flagged for holding and Bryant was cited for unsportsmanlike conduct. The drive resumed at the North Little Rock 35. Tidwell continued to bash but Holmes kept for 24 yards to the 26 and, a play later, scored from the 18 to snap the tie.

The Hornets tried to answer. Hunter’s 9-yard run picked up a first down at the 45. Two plays later, they faced a third-and-5 at midfield but Howard was stopped short and Denker came back in to punt.

Using the rugby style punt always made Denker a threat to fake and run with the ball and apparently that’s what Calley had called until he saw how North Little Rock lined up.

“We had several gadgets and fakes and stuff in but I just felt like — when we were going to run the fake punt two times, they were lined up to stop it,” the coach explained. “We thought about running the fake field goal. The hash we were on wouldn’t allow for it. We had some pass plays in but, with the weather the way it was, we just didn’t want to put it in the air unless we had to. The weather didn’t help us.”

Denker kicked the Charging Wildcats back to their 18 but Tidwell broke a 32-yard run to start the clinching touchdown drive.

The Wildcats drove out to the 33 where Land’s second-down pass was picked off by Bryce Denker at the 44.

The Hornets were in business again and drove to the 32. Savonte Turner slashed to the 21 but was separated from the ball and, once again, North Little Rock recovered.

It took three plays for the Charging Wildcats to get to the end zone. A 48-yard jaunt by Tidwell set up a 28-yard touchdown pass from Land to former Bryant player K.J. Hill.

Down 7-0, the Hornets put together another threat. The big play was a 14-yard run by Howard that had a 15-yard penalty tacked on. Bryant wound up reaching the 20 where, on a third-and-5, Howard was stopped short at the 18.

Alex Denker came on to try a 34-yard field goal but it was wide left.

In turn, North Little Rock drove to the Bryant 7 but Holmes was dropped for a loss on a third-and-1 and a field goal attempt was wide under pressure from Bryant’s Drew Tipton.

So the teams went to the half with North Little Rock clinging to a slim 7-0 lead.

“I was proud of the guys,” stated Calley, reflecting on the 7-4 season. “Sometimes we were fighting with a short stick but we never quit fighting through all the injuries, the 2-3 start, things that could’ve made us quit but didn’t. I wouldn’t trade any player I’ve got for anybody North Little Rock’s got.”