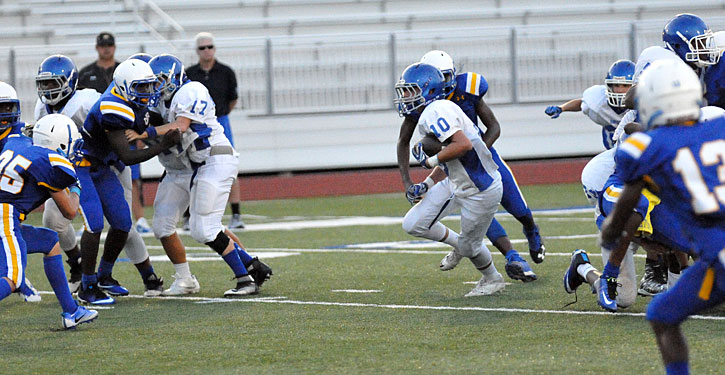 North Little Rock too much for Bryant White 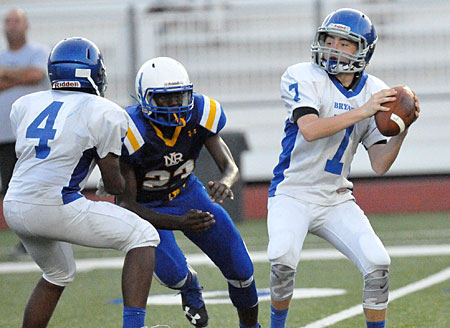 There was a time when North Little Rock had several middle schools but, recently, they’ve brought all the seventh- and eighth-grade students together. So, instead of playing Ridge Road or Lakewood, Bryant White had to tackle the one North Little Rock eighth grade team.

The Hornets were stymied on offense, managing just one first down in the game and netting minus-44 yards rushing to go with just 20 yards passing on a pair of swing passes from Austin Ledbetter to Myles Aldrige. 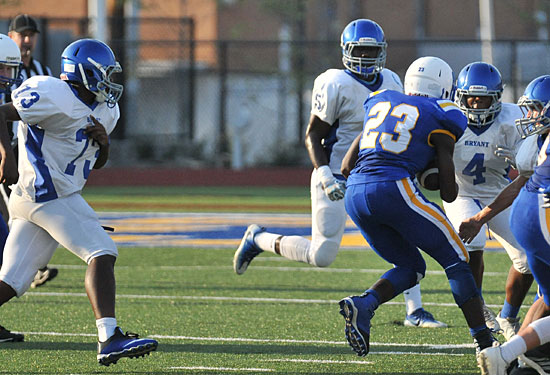 Bryant’s only touchdown came on Aldrige’s 66-yard kickoff return, which came after North Little Rock’s second touchdown. It cut the lead to 12-6 and the Hornets’ defense made a stop on next Charging Wildcats’ series to make that score hold up at the half.

The Cats scored on their first two possessions of the second half then ran out the final 3:58 on their third.

North Little Rock took the opening kickoff and returned it to near midfield. Eleven plays later, quarterback Kareame Cotton snuck it in the fromt the 1 on the last play of the period. 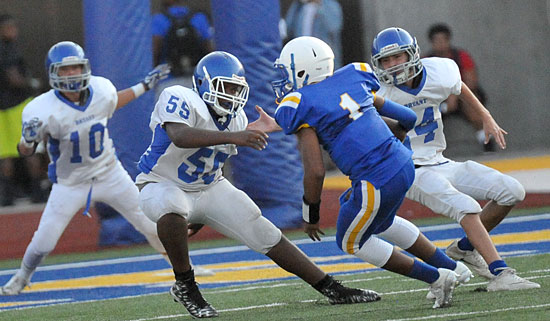 The Hornets wound up running just plays on offense in the first half. The lone first down came on the second snap when Ledbetter tossed a swing pass to Aldrige for 14 yards to the North Little Rock 39.

On North Little Rocks’ second play, Ricky Reed was hit in the backfield but shook it off, skirted right end and sprinted down the sideline for a 76-yard touchdown run that made it 12-0. 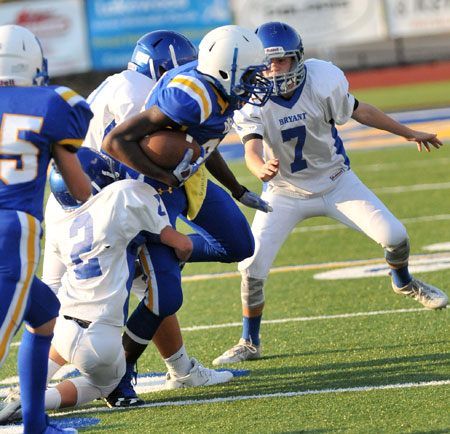 Trey Williams (2) and a teammate puts the clamps on as Aiden Adams (7) arrives to help out. (Photo by Kevin Nagle)

Off the momentum from that, the Hornets’ defense rose up to force a North Little Rock punt. A third-down pass from Cotton to Randall Abrams lost a yard thanks to a fine tackle by Blaine Sears.

The Wildcats lined up to punt but a bad snap forced Reed to run. He was stopped short and the Hornets took over on downs just 42 yards away from a tying score.

But there was just :12 showing on the clock. They got to run two plays and one of those was negated by a holding penalty that pushed them further back.

On the last play, the Hornets tried to get the ball to Aldrige on a reverse but he was downed for a loss of 9.

And it didn’t get much better for Bryant White in the second half. On the first play, Ledbetter was dropped for an 11-yard loss. Eventually, the Hornets were forced to punt from the 5. A short kick was returned for a touchdown by Jerrell Rice but the return was negated by an illegal block.

Still, the Wildcats drove for a touchdown that gave them a two-score lead. Fredrick O’Donald ran it in from 9 yards out to make it 18-6 with 1:14 left in the third quarter.

Aldrige was thrown for a loss twice during the subsequent series and, despite a personal foul penalty against North Little Rock, the Hornets were unable to pick up a first down. A fourth-down pass fell incomplete.

As a result, North Little Rock took over at the Bryant 36. A personal foul against Bryant put the ball at the 14 and, from there, O’Donald scored. He also ran in the conversion to complete the scoring on the night with 6:27 still to play.

The Hornets’ last possession was a three-and-out then the Wildcats drained the final 3:58.

The Hornets fell to 1-2 on the second. They’ll be back in action at home against Conway Blue on Wednesday, Sept. 28. 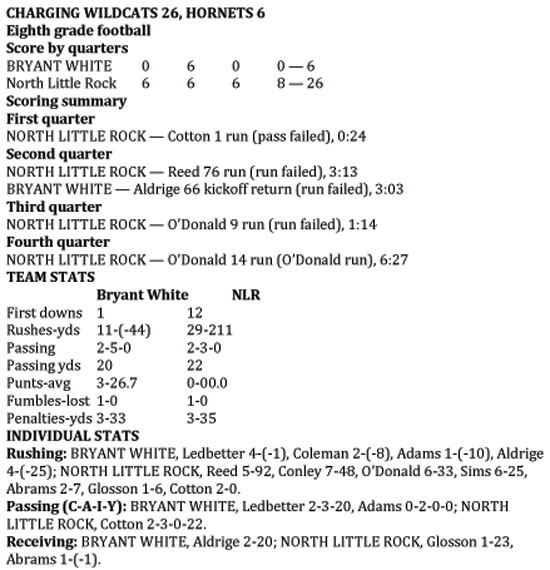