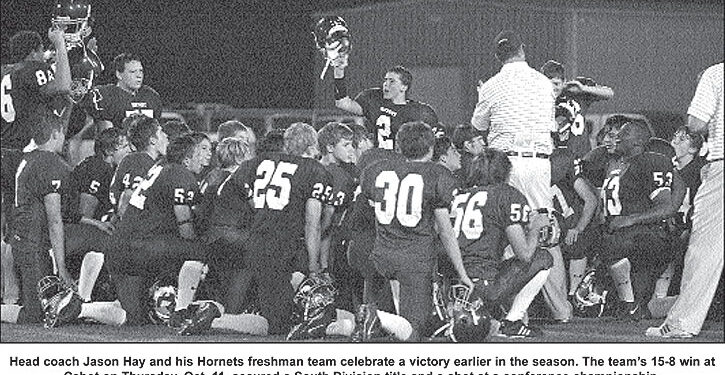 CABOT — For the first time since the Central Arkansas Junior High Conference split into divisions in 2000, the Bryant Hornets freshman team will play in the league championship game after they clinched the South Division title with a hard-earned 15-8 win over the Cabot South Panthers on Thursday, Oct. 18.

The Hornets, who improved to 7-0-1 overall and 6-0 in divisional play, can wrap up their first undisputed division title with a win at home over Benton or a Lake Hamilton loss against Cabot South on Thursday, Oct. 25. The conference championship game will be on Tuesday, Oct. 30, at Vilonia or Greenbrier.

The Hornets trailed for just the second time all season when Cabot South, which had a chance to pull into a tie for first place with a win, answered their first-possession touchdown drive with its own, adding a two-point conversion to make it 8-7.

It was just the second first-half touchdown scored against Bryant all season.

But, the Hornets responded with another scoring drive then the defenses of the two teams took over.

It took the Hornets’ vaunted defense a half to get accustomed to Cabot’s power dead-T offense. The Panthers rushed for 92 yards in the first half, more than five Bryant opponents gained in an entire game.

In the second half, however, the Panthers wound up with a net of minus-7 yards on the ground to finish with 86 for the game. Cabot South netted 12 yards of total offense after the break.

But the Panther defense was nearly as stingy as the Hornets who managed a net of just 10 yards in the second half.

In fact, there was only one first down between the two teams in the second half and it came via penalty.

“Cabot South has a good team,” stated Hornets head coach Jason Hay. “They’re the most physical team we’ve played all year. The kids have been saying, ‘We want a game where we’re not going to be done at halftime,’ and they got it. We’ve been telling them, ‘Be careful what you wish for, you may get it.’ Cabot played a heck of a game.”

“We bowed up and got it done,”he added, praising his defense. “We told them (at halftime) it was going to be tough to score and they were going to have to bow up and that’s what they did. It was just good ol’ fashioned get-after-it. It was just a matter of will, them wanting to. And they got it done. We had to have it. The defense has been after it all year and they bailed us out again. They did a good job.”

Bryant’s opening score was set up by a trick play on the opening kickoff. James Glasper fielded the kick and took off to the right. He faked a handoff to Dylan Pritchett then handed off to Tanner Tolbert who was trailing Pritchett. Tolbert broke the return up the left sideline to the Cabot 22, coming down hard on his knee as he was bounced out of bounds.

Three plays later, however, the Hornets faced a fourth-and-9 at the 21. Tolbert caught a pass from Blake Davidson on a bubble screen and sliced through the Panthers for a first down at the 8. On the next play, Pritchett powered in for the touchdown.

Bo Stitch added the extra point to make it 7-0.

Cabot answered with a grind-it-out march from its own 46 to paydirt. On the 10th running play of the drive, Tanner Rigdon scored from 7 yards out. And when quarterback Justin Ellison passed to Clint Cates for the conversion, the Panthers led 8-7.

After Glasper returned the ensuing kickoff to the 44, the Hornets drove for their answering score which wound up being the difference. Pritchett started the drive with a 9-yard run. Davidson followed with a 17-yard strike to Caleb Garrett who would haul in four passes for 67 yards in the game.

After a 5-yard run by Glasper, Davidson and Tolbert hooked up for 12 to the 13. A play later, Davidson’s pass to Josh Hampton reached the 2. Pritchett scored from there to make it 13-8.

Bryant’s initial two-point attempt failed, but Cabot was charged with defensive holding on a Bryant receiver trying to get free to catch a pass in the end zone. Given a second chance, the Hornets got the 2 on a dive by Pritchett.

Cabot appeared to be on the way to their own answering touchdown when they reached the Bryant 19. But a dropped pass in the end zone made it fourth-and-5. The Panthers went to the air again and tight end Ethan Covington made a juggling catch only to have Austin Johnson, Jacob Brady and a swarm of other Hornets reach him in time to drop him for a loss.

The Hornets took over with 1:22 left in the half and made a bid to tack on a score when Davidson and Garrett hooked up on a 31-yard pass. A 21-yard completion to Brian Floyd followed but it was negated by a holding penalty deep in the Bryant backfield. The infraction actually cost the Hornets 19 yards and they were unable to make it up.

The half ended with what turned out to be the final score on the board.

The Hornets had the field-position advantage the entire second half. After forcing a Cabot punt, they got it at the Panthers’ 36 only to have a penalty undermine their effort. A fourth-down pass from Davidson to Garrett picked up 5 yards when they needed 6 and Cabot took over.

Three plays later, the Panthers faced a fourth-and-1 at their own 36. The Hornets defense stuffed the ensuing running play and Bryant had the ball back 35 yards away from another score.

On first down, however, Davidson was pressured and his throw was picked off by Riley Hawkins at the 21.

Again Cabot went for it on a fourth-and-2 at the 29 and a pass over the middle failed to connect and the Hornets took over.

But Bryant couldn’t move it either and when Davidson was sacked on fourth down, Cabot had it back with 5:05 left to play.

The Hornets appeared to have the ball back when a third-down pass was intercepted by Will Suddeth but the Hornets were penalized for roughing the passer with a hit that knocked Ellison out of the game.

The mark off moved the ball to the Cabot 38 with 2:59 left to play. New quarterback Zach Brown kept on an option and was cut down by Bryant’s Jordan Murdock at the 40. After a procedure penalty, Brown hit Covington for 4 yards. Another procedure penalty made it third and 14. Cabot tried a reverse pass but Hampton wasn’t fooled and tackled wide receiver Joey Holland for a loss to the 25.

Cabot’s last gasp was undermined by a fumbled snap.