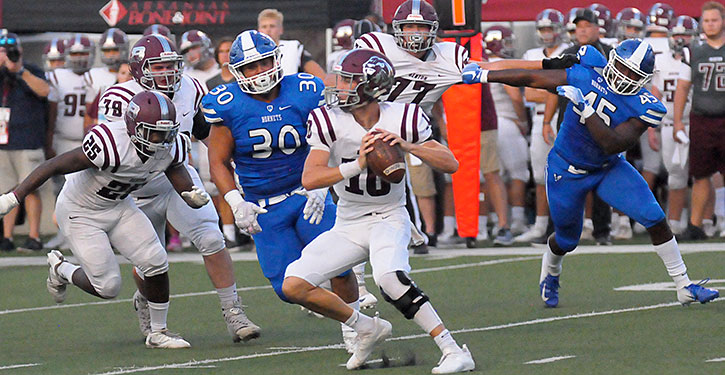 Panic at the Salt Bowl: Game called amid third-quarter mayhem 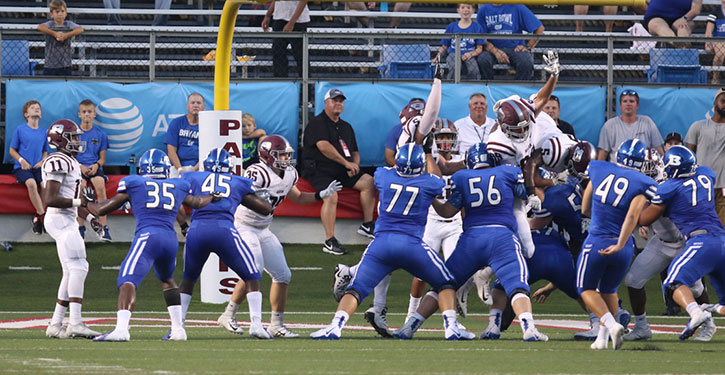 Grayson Scoles (49) gets solid protection for an extra point. (Photo by Rick Nation)

For more photos of this event by Rick Nation go here; by Kevin Nagle, go here 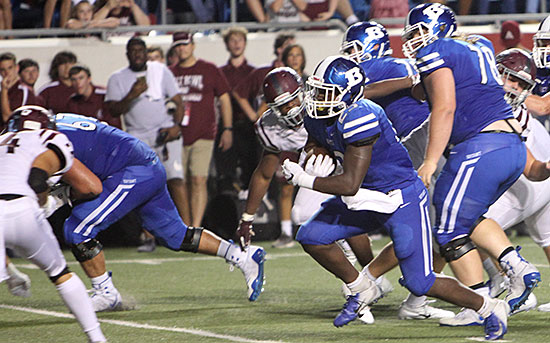 LITTLE ROCK — You don’t yell “Fire” in a crowded theater.

And you don’t yell “Shooter” in a football stadium packed with 38,000 people.

The panic that ensued left people traumatized, trampled and out of War Memorial Stadium, some in their cars driving away, others blocks away at the zoo or UAMS, many a parent searching, distraught, for their children.

Though stories about what happened were wild, varied and rampant, involving tasers, firecrackers and fights. When it was all over, State Parks officials and law enforcement filtered out the account that there had apparently been a fight in the concourse area — no official word about who exactly, much less why. Some said students. Others said teenagers who didn’t go to either school. Some said boys. Some said girls. 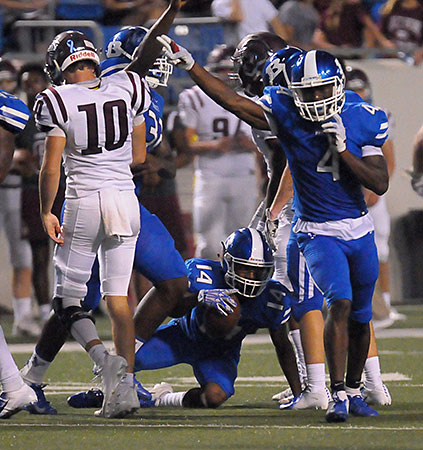 The fight drew security to the area and, apparently, those involved in the fighting bolted, knocking down medal barriers that hit the concrete flooring, creating some loud popping noises. With the rush of people out of the concourse in the northwest corner of the stadium, someone jumped to conclusions based on the running and the sound, and the wave of mostly students in that section of the stands began pushing away from that corner towards the exit ramps.

People in the north end zone, which had been opened up for the first time at a Salt Bowl due to the attendance predictions, began running the other way towards the East side seats.

Someone said “shooter” or “gun” or whatever and the folks started to spill onto the field as the game stopped. Benton’s players rushed off the field toward the southeast corner where their locker room was, joined by fans, mostly students. Parents were dropping their kids over the seven-foot wall that separates the field from the stands, instructing them to join the dash for the southeast corner.

Bryant’s team huddled near that wall on the West side of the stadium.

Benton’s kids couldn’t get in the locker, so they headed for the parking lot and beyond. Some of the Bryant players headed that way as well then, the Hornets eventually went to their locker room as things started to settle down a bit. 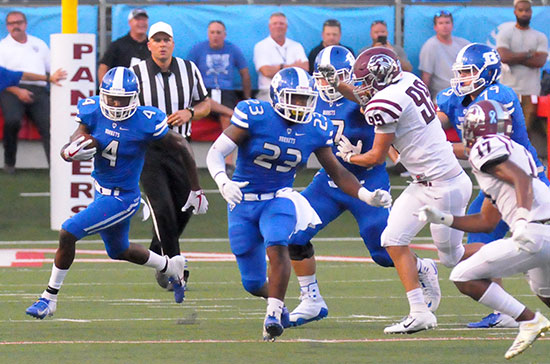 There was no gun. There were no shots. But people were convinced that their lives were in danger and they reacted accordingly.

Parks employees and law enforcement, with the help of Mark Scarlett, Bryant’s p.a. announcer, who finally got some official word from Parks director Kane Webb in the press box, re-established some calm.

After a delay of over 30 minutes, the game was called off, much to the disappointment of many of the fans that remained, particularly on the Bryant side.

The Hornets appeared to be in the process of taking over what had been a close contest.

Like Bryant’s game against Little Rock Central a few years ago, when the game was shut down due to lightning with Bryant leading 21-0 just after halftime, when a non-conference contest that has gone beyond the half is interrupted, the victory is awarded to the team that’s ahead. 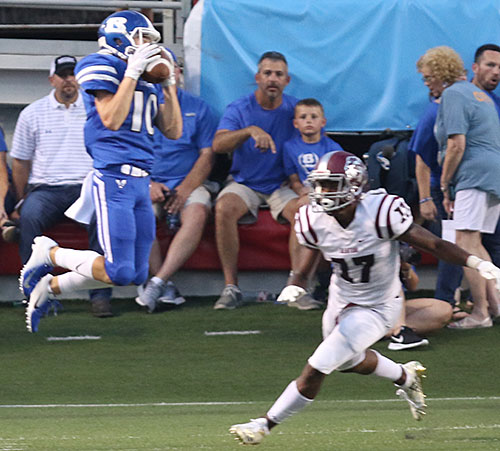 River Gregory hauls in a pass in front of Benton’s Devin Griffith (17). (Photo by Rick Nation)

So, in a Salt Bowl no one will ever forget (but not for the right reasons), the Hornets improved to 1-0 with a 28-14 victory in a game that was stopped with 9:22 left in the third quarter.

The crowd of 38,215 was the largest for a high school game in state history, breaking a record set at the Salt Bowl in 2015.

As for the game, as much as there was, the teams battled to a scoreless tie in the first quarter but then traded licks until it was 14-14 with just over five minutes left in the half.

Bryant drove 59 yards in 12 plays to take the lead with :24 left. LaTavion Scott, who rushed for two touchdowns and picked up 110 yards on 12 carries all the first half, walked in from 2 yards out. That came moments after senior quarterback Ren Hefley scrambled for 14 yards to help make up for a holding penalty that had backed the Hornets up.

The key plays of the drive were third-down conversions by Scott, with a 13-yard run early in the march, and a 6-yard completion from Hefley to sophomore River Gregory. 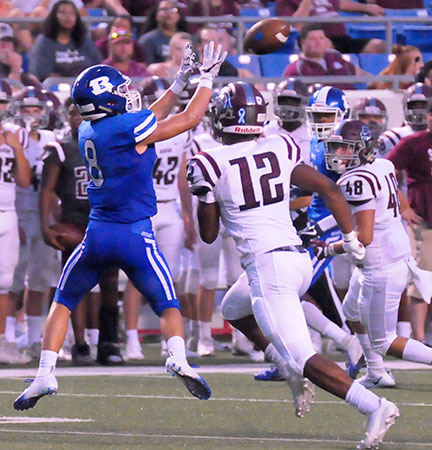 Jake Meaders (8) hauls in a pass. (Photo by Kevin Nagle)

Hefley, who threw one pass in the second half, wound up 14 of 21 in the air for 165 yards and two scores. Gregory caught four of those tosses for 61 stripes.

Benton made a bid to tie it back up with a quick drive in the final :17 of the half. Quarterback Colen Morrow completed a 17-yard pass to Braxton Slaughter. A big hit as the pass was hauled in was flagged for unnecessary roughness and suddenly the Panthers were at the Bryant 32.

A play later, a reverse pass with wide-out Gavin Wells throwing to Garrett Body went for 25 yards. But a touchdown-saving tackle by Jake Wright ended the half with the Hornets up 21-14.

Another major penalty at the end of the second-half kickoff gave Benton possession at Bryant’s 48. But, on the first play, Panther running back Zak Wallace was separated from the ball by Wilson and the Hornets’ Derek Rose recovered at the 43.

On first down, Hefley went deep and, with two receivers open down the left seam, he connected with Josh Robinson in stride. He bolted to the end zone for a 57-yard touchdown and, with Grayson Scoles’ extra point, produced the first two-score lead of the game, 28-14.

Benton’s kickoff return was bobbled, and the Panthers wound up starting their ensuing possession at their own 10. With the Hornets’ defense showing a renewed tenacity and attacking approach, the Panthers were nonetheless able to work out of the hole and get a first down. D’Anthony Harper bolted for 18 yards to the 45. That’s when the Hornets’ defense shut the them down and forced a punt. 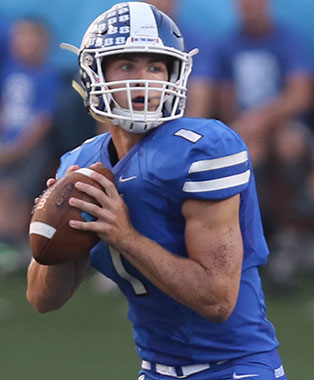 The Hornets offense was about to take the field at their own 26 when the mayhem began.

Benton opened the scoring in the game. On the Panthers’ third possession, they drove to the Bryant 41. Morrow was dropped for a loss by David Shifflet and a trio of teammates. That set up a fourth-and-2 at the 42.

The Panthers went with a power set in the “Wildcat” formation. Wallace took the snap and, with all of his blockers working to the right and all of Bryant’s defenders pushing that way, he cut back to the left side and dashed 42 yards for a touchdown.

The Benton senior had 85 yards on 12 carries in the abbreviated contest.

The Hornets blocked the extra point attempt by Bryan Araujo to make it 6-0 with 11:01 remaining in the half.

Bryant put together an answering drive, sparked by a 36-yard completion from Hefley to Gregory.

From the 24, Scott powered for 9 yards. After a false start threatened to slow them down, the Hornets converted a second-down play with another Hefley-to-Gregory completion at the 8. From there, Andrew Hayes, the Hornets’ star corner getting a chance to play wide receiver, took a shovel pass from Hefley and skirted right end for a touchdown.

After holding the Panthers without a first down, the Hornets got the ball back at their own 22. Ahmad Adams dashed for 11 yards and, a play later, Hefley found Jake Meaders for 14 to the 49.

Moments later, the Hornets faced a third-and-7 at the Benton 46. They turned to Scott, who not only got the first down but made a remarkably determined, tackle-breaking dash to the end zone.

A good kickoff return by Benton’s Cade Clark had the Panthers 48 yards from paydirt. A 42-yard pass from Morrow to Body took care of a lot of that. A play later, Morrow tossed a 5-yard touchdown pass to Wells to make it 14-12.

The Panthers converted a two-point try to tie it, as Wells, on a double reverse, threw to Morrow in the right corner of the end zone. It was tied with 5:26 left in the half.

Benton will return to action next Friday against Arkadelphia. Bryant takes the week off before returning to action at Bentonville West on Friday, Sept. 7. 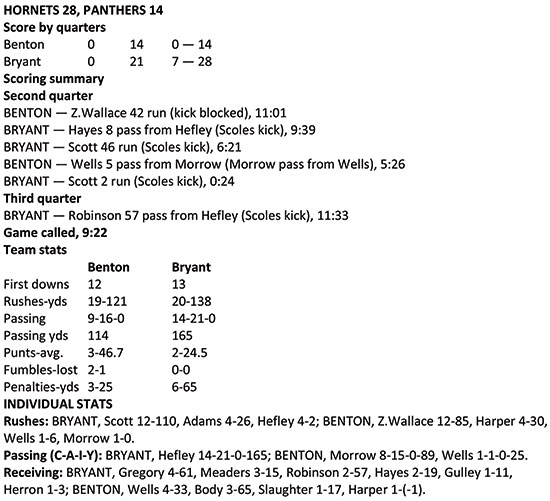 Salt Bowl 19: Are teams as good as they’ve ever been?
Freshman girls show considerable improvement at tourney