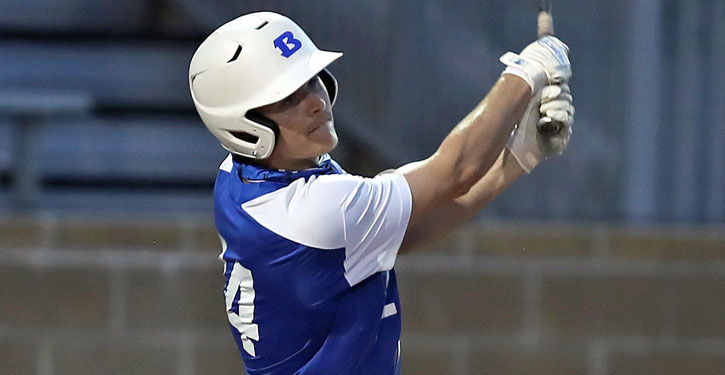 On Friday evening at Bryant High School Field, the Hornets’ senior infielder, who’s decided to follow family tradition and join the Marine Corps in August, went 3 for 4 with three runs batted in and made sparkling defensive plays at first base, twice starting unassisted doubleplays to help teammate Garret Wilson, Bryant’s starting pitcher, get out of early jams.

The Hornets hacked out 12 hits to run-rule the Lake Hamiilton Wolves, who came into the game 8-2 on the season.

The 12-2 win, as part of the spring break Robinson Invitational Tournament, improved the Hornets to 13-1 going into today’s game at 4 p.m., against Russellville for the championship of half of the tourney bracket.

The Hornets came into the game off a 6-2 win over DeRidder, La., earlier in the day, a win that came despite four errors.

“I didn’t like our approach earlier today,” acknowledged Hornets head coach Travis Queck. “It was kind of — you know, we played Catholic and Conway, a lot of highs, and you come back and take four or five days to practice, shore up some things.

“And we just kind of got away from that game-like mentality the first game,” he asserted. “So, it took us a game to get into it. I didn’t like that we had to adjust that but, you know, these are 16- to 18-year-old kids. So, we’re going to learn and, I’ll tell you what, we did a heck of a job the second game.”

Parker’s first splendid play was a huge momentum shift in the first inning. Lake Hamilton had loaded the bases on singles by Ryan Fields and Josh Parish then a one-out walk to Dylan Horton. Carson Harris came to the plate and ripped a liner that Parker speared and, with a lunge, got to the first-base back before Ben Varner, running for Horton, the Wolves’ catcher, could get back.

That ended the threat and the inning.

In the home half, a one-out walk to Noah Davis opened the door for a four-run inning for the Hornets. Austin Ledbetter battled Harris to a 3-2 count then swung and a high-and-tight delivery. The ball came off his bat and hit him in the face. Ledbetter suffered a broken nose and had to come out. Gideon Motes completed the plate appearance by taking ball four for a walk.

And when Conner Martin’s pop behind first was dropped, the Hornets had the bases packed.

That brought up Parker, who connected on a liner to right. Davis scored then around came Motes to make it 2-0.

With runners at second and third, Turner Seelinger got a squeeze bunt down to drive in Martin. Moments later, Wilson helped himself to an RBI single to center to make it 4-0.

Matt Carmack greeted Wilson at the top of the second with a single to left. And, after J.T. Bartwell flew to center, Grant Bearden ripped a liner that Parker dove to catch near the line as Carmack was trying to dive back to the base. In one motion, Parker reached over and tagged Carmack for another inning-ending doubleplay.

Fields and Parish each singled again for Lake Hamilton in the top of the third. Weston Dobyns followed with a sinking liner to left. Aidan Adams sprinted in and dove to make the catch. That took the starch out of the inning. Wilson fanned Horton to end the inning.

Adams, who walked three times and singled in the game, drew a one-out pass after a 10-pitch battle with Harris. Jordan Knox then clubbed a double to left center. And, with runners at second and third, Riggs got down a squeeze bunt to make Bryant’s lead 7-0.

Harris singled to center to start the Lake Hamilton fourth. Carmack walked then was forced at second on a grounder to Davis at short by Bardwell. With Harris at third, Bardwell stole second uncontested. Harris scored on a wild pitch.

With Bardwell at third, Wilson fanned Bearden and got Cohen Manley to tap back to Wilson on the mound to end the inning.

Bryant got that run back in the bottom of the inning. With one out, Martin was struck by a 2-2 delivery. Parker yanked a double to left — hits to right, center and left — to put runners at second and third. A wild pitch allowed Martin to score, and it was 8-1.

Wilson threw his 70th pitch as he walked Fields to start the fifth. Blaine Sears relieved and got Parish to ground into a doubleplay with Martin making the tag before throwing to first for the doubleplay.

Dobyns grounded out to short to end the inning.

Bryant’s fifth started with a walk to Adams. An errant pickoff throw enabled Adams to sprint to third. An out later, Riggs burned the outfielders for an RBI triple. he scored moments later on a wild pitch.

Horton singled, Carmack doubled, and Bardwell delivered the run with a sacrifice fly. With Carmack at third, Dobyns grounded out to Davis at short to end the inning.

Martin, Wilson, Adams and Knox each had singles in the top of the sixth, producing the game-ending runs.

“The second game, I was just going to let Wilson go,” he said. “I expect Wilson to make it where I can’t take him out, like he’s doing so good. He’s got that kind of capability. When he gets that and understands that concept to where he thinks, ‘I’m not going to let Coach Queck come out here one time because I’m doing so good,’ it’s going to be good.

“The good thing is we have arms,” the coach acknowledged. “I mean, Blaine Sears hasn’t pitched much at all and, the thing is, he’s one of our most consistent guys. He does a great job, and the guys are behind him really, really well. It’s a good problem to have. They’ve got to be ready when their time’s called.”