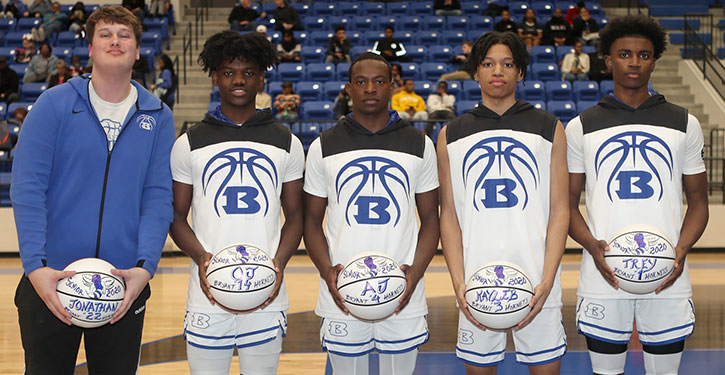 On Senior Night, senior Treylon Payne sliced to the basket for a layup with just over a second to play to provide the Bryant Hornets with the winning margin in a thrilling 49-47 victory over the rival Conway Wampus Cats to close out the regular season for both teams at Hornet Arena.

As a result of the victory and Little Rock Central’s win over Little Rock Catholic, it appears that Bryant has garnered the number 3 seed from the 6A-Central Conference to the 6A State tournament, which the Hornets will host starting on Wednesday, March 4.

Bryant, Conway and Central wound up in a three-way tie for third as five teams finished within two games of each other in the standings. Central will be a 4 seed and Conway dropped to a 5 after having hopes of earning a 2 seed and a first-round bye with a victory.

The Hornets will play their first tourney game on Thursday at 2:30 p.m., against Van Buren.

“Every time we play each other it’s a battle,” acknowledged Hornets head coach Mike Abrahamson. “They’re a tough team and I’m proud of my team for sticking it out.”

Unable to match Conway’s inside strength much of the night, the Hornets got a lift from junior guard Austin Schroeder, who entered in the fourth quarter after center Will Diggins picked up his fourth foul. With few options to cover Conway’s 6-5, 230-pound Jayden Williams, Abrahamson assigned the 5-11 Schroeder to him.

After scoring 8 of his 11 points in the third quarter, Williams, who had 17 points and 15 rebounds in Conway’s 55-51 win over the Hornets on Jan. 31, did not score in the fourth as, much of the time, Schroeder, an all-conference safety for the State champion football Hornets, grappled with the Cats’ big man.

“What a great effort he had defending big Williams there in the post, just a great effort,” Abrahamson asserted. “Of course, Trey scored for us early and Cam, after struggling, scored late for us. But Austin really stepped up defensively and set a tone for our team that was just awesome.”

Schroeder, with back-side help from his teammates, frustrated Williams so much that with the score tied 43-43 with under two minutes to play, he was cited for an offensive foul trying to post up. In fact, he was so frustrated, he committed a technical foul.

Schroeder went to the line and converted two free throws to put Bryant in the lead. Payne followed with the free throws for the technical and added one to make it a 3-point game.

Bryant did not trail the rest of the game.

Asked why he tabbed Schroeder for the job in the post, Abrahamson said, “Austin’s character. We don’t really have a lot of size to go with Will at this point. But Will had the four fouls so — I just believe in Austin. He’s just the type of kid that you want your own kids to be like. He gives you everything he’s got. He knows where he’s supposed to be, when he’s supposed to be there and how he’s supposed to get there. He knows multiple spots on the floor, offensively and defensively.

“I didn’t know if it would work,” he admitted. “I knew we’d get his best effort. If it didn’t work, I was willing to go down with him because that’s what type of person he is.”

Of the technical, Abrahamson said, “It was huge. It was the difference in the game.

“It was an incredible effort,” he added of Schroeder, “but not just effort. It was intelligent, good footwork, good hand placement, good leverage and a little help-side (from his teammates), of course. It’s a team game.”

The game was hardly decided after the technical. Given possession after the free throws, the Hornets suffered a turnover. A running jumper found the bottom of the net for Conway’s Lucas Foster. With :32.7 left, A.J. Jenkins converted a free throw to make it a 2-point lead.

Conway worked the ball and, with :11.7 left, Caleb London drove to the hole and hit a short jumper to tie the game.

Abrahamson did not call a timeout, he let his players run it and, as time was running out, Payne made the dash from the left wing for the lead.

Initially, it appeared to be a buzzer-beater as time ran out. But Conway was awarded a timeout and the clock was reset with :01.2 showing.

After seeing what Bryant was going to do defensively, Conway head coach Salty Longing called another timeout to set up a last-second hope. But, when play resumed, the Hornets forced a five-second inbounds call and took possession. When the ball was inbounded successfully to Khasen Robinson, the game was over.

“It was just two teams getting after it,” Abrahamson said. “We know each other real well, know what each other’s doing and when they’re doing it and how they want to get into it. So, it’s like a playoff game. It really is.

Payne finished with a game-high 22 points. Cam Hunter, after being held to 2 in the first half, finished with 14. Jenkins scored 7.

For Conway, London had 17 to go with Williams’ 11. Trey Tull and Lucas Foster added 7 each.

London got a dunk to start the game. Conway went on to establish the upper hand, taking an 18-10 lead into the second quarter.

Bryant countered with a 10-2 blitz to start the new period. Diggins followed his own miss for a bucket and, moments later, Jenkins buried a 3 to make it 18-15 and force a Conway timeout.

An illegal screen, which plagued the Cats in the game, forfeited their possession and Payne’s 3 tied the game at 18.

London and Robinson traded baskets then Foster and Payne did as well. Tull snapped the 22-22 tie then London followed his own miss to put the Cats ahead. They held a 1-point advantage at the half after Payne popped his third triple of the half.

Payne found the range from distance twice in the first two minutes of the third quarter and the Hornets held a 31-30 lead. After a timeout, however, Conway countered and built a 36-31 advantage.

Trailing 36-31, the Hornets called timeout. They too responded well. Hunter came through with back-to-back hoops and, after Williams scored, knocked down a trey. The game was tied 38-38 until London hit a free throw with :45.8 left in the quarter, giving Conway an edge going into the fourth.

The game was tied at 40 and 43. With the latter score on the board, both teams had multiple chances to snap the deadlock but the defenses were so stingy that it wasn’t until the technical foul and Schroder’s free throws that the tally changed.

Games for diamond Hornets pushed back a day
March 1 in Bryant athletic history: 2019