SHERIDAN — The Bryant Black Sox and Sheridan Yellowjackets Junior American Legion baseball teams seemed to be on their way to trading shutout victories. In the first game of their doubleheader at the Sheridan Sports Complex, Bryant’s Landon Pickett twirled a three-hit whitewash at the Jackets. In the nightcap, Grady Finley had blanked the Sox on two hits through four innings of the five-inning contest.

But Bryant erupted for eight runs in the top of the fifth and right-hander Caleb Milam struck out the side in the bottom of the inning as the Sox escaped with a sweep.[more] 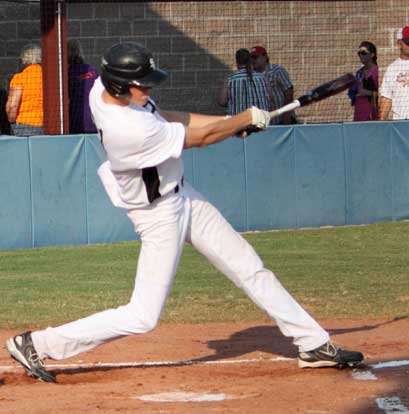 Milam was also one of the hitting stars of the comeback. He started the inning with a double and provided the biggest blow later on, clearing the bases with another two-bagger.

The victories improved the Sox to 9-2-1 going into Wednesday’s game at home against Little Rock Blue at 6 p.m. Friday, they host Little Rock Continental Express before closing out the regular season on Monday, June 28, at home against Hot Springs Lakeside. The Junior District Tournament at Sheridan begins on July 5.

In Tuesday’s opener, Pickett struck out eight and walked two as he completed seven innings with just 83 pitches. Jake Smith had two of Sheridan’s hits and Kurt Stinnett doubled for the third one.

Offensively, Ozzie Hurt had two hits for the Sox. He scored a run and drove another in.

Bryant took the lead in the second when Tyler Brown reached on an error. A wild pick-off throw by Sheridan starter Wyatt Daggett allowed Brown to take second then Josh Pultro singled him to third. Trent Rivers came up and got a squeeze bunt down. Daggett got to the ball but his throw to the plate was off the mark as Brown slid in safely.

Moments later, however, the Jackets turned a doubleplay to end the threat.

In the bottom of the inning, Sheridan came as close as it would get to scoring. Smith singled to open the frame and Stinnett sacrificed him to second. A wild pitch allowed Smith to take third and another gave him a chance to score. But the ball ricocheted off the netting behind home plate and came back to catcher Matt Neal who made a diving tag just in time to retire Smith.

Neal then led off the top of the third with a single to center. He stole second when Daggett forgot to throw from the stretch. With one out, Hurt bounced a single through the right side to drive Neal home.

Rivers had a one-out double in the fourth and Hurt singled with one down in the fifth but the score remained 2-0 through five. 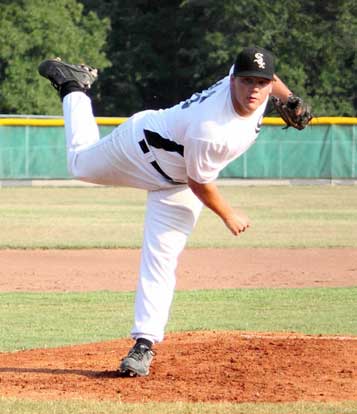 Pickett retired six in a row before issuing a walk to Billy Wicker with one out in the home fourth. The Sox, however, turned a doubleplay to end the inning. In the fifth, the Bryant right-hander worked around Stinnett’s one-out double. Nannemann’s grounder to second got Stinnett to third but Pickett fanned Daggett to retire the side.

Brown shot a single past Finley at third to start the Bryant sixth. Pultro’s grounder to short then drew a wild throw to first. With runners at the corners, Pultro was caught trying to steal. Moments later, Rivers got a bunt down that was fielded by first baseman Ryan Taylor. Wicker, coming over from second to cover first, couldn’t handle Taylor’s throw and Bryant scored to make it 3-0.

The Sox added one more in the seventh when Evan Jobe earned a one-out walk. He stole second and was headed to third when Wicker made a splendid play on Hurt’s bouncer up the middle. With Jobe breaking for third, Wicker fired a throw there in time to get him for the second out of the inning.

Jordan Taylor, however, followed with a long double to left-center that allowed Hurt to score all the way from first.

Pickett, meanwhile, set down seven straight before Smith singled up the middle with two down in the bottom of the seventh. A wild pitch got him to second but Stinnett bounced out to Brown at third to end the game.

In the second contest, Finley didn’t allow a hit until Quinton Motto snuck one through the right side with two out in the third. Finley worked around that then got through the fourth despite a two-out single by Chris Joiner.

In the meantime, the Jackets built a 3-0 lead. Their first run came in the second when Stinnett drilled a double to left, advanced when a standard Bryant pickoff move by Milam was called a balk. Bryant manager Darren Hurt protested, trying to get an explanation. But he wound up returning to the dugout unsatisfied.

Milam retired the next two then worked around an infield hit by Jake Crenshaw and a base hit to left by Wicker in the third. 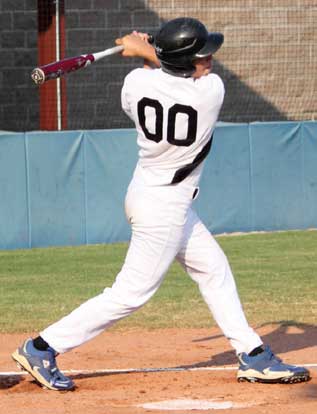 In the bottom of the fourth, Sheridan added a pair of runs for some insurance. Smith singled and when Stinnett’s grounder to third drew a wild throw to second in an attempt to get a force, Smith wound up at third and Stinnett at first. With the infield in, Nannemann’s chopper to second was hit too slowly for Ozzie Hurt to make a throw to the plate. He retired Nannemann at first as Smith scored. Daggett then singled up the middle to get Stinnett home.

Milam got out of the inning by getting Taylor to ground into a force at second then striking out Crenshaw.

He then started the bottom of the inning by whacking a 3-2 pitch into the gap in right-center for a double. He advanced to third on a wild pitch but had to hold there as Pultro grounded to short.

Rivers followed but when he fouled off a 1-0 pitch, the leg cramp that had struck him in the field in the previous inning, knotted up again to the point that he couldn’t continue. Pickett came on to complete the at-bat and proceeded to shoot a single to center to drive in Bryant’s first run.

And when Taylor blooped a single to center, Motto scored to tie the game.

Joiner followed with a shot to center. Jobe scored to put the Sox ahead and Hurt tried to follow but a strong throw got there in time though he nearly evaded the tag.

Taylor and Joiner moved to second and third on the throw and when Brown was hit by a pitch, the sacks were full again with Milam back at the plate. Again, he worked the count to 3-2 and belted a drive to right center that one-hopped the fence. All three runs scored as the Sox took a 7-3 lead.

It was only then that Sheridan made a pitching change. Nannemann, a lefty, came on to face Pultro. But Pultro socked his first delivery to right-center for an RBI single, making it 8-3.

Sheridan had the top of its order up in the bottom of the inning but Milam fanned the side on 14 pitches.

The loss doubled the Sheridan Junior team’s total for the year. The Jackets fell to 15-4.