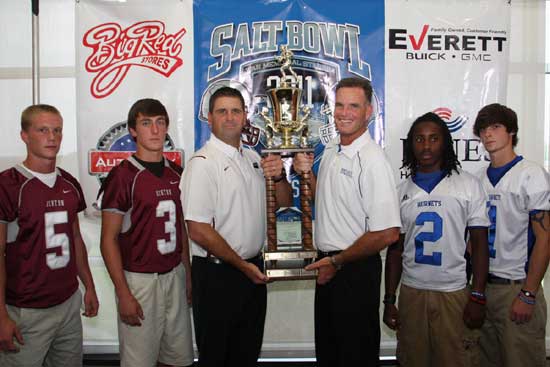 LITTLE ROCK — “It’s something that runs through my head at some point at least every day,” stated Bryant Hornets senior[more] wide receiver Sawyer Nichols. “Everybody talks about it. At football, it’s what everybody talks about: As soon as off-season starts, that’s when you start working for it. We’ve got to get ready for it every day in practice. It’s what we work for. We’re ready for it to get here.”

Nichols was talking about the annual Salt Bowl, the renewal of the rivalry between the Hornets and their Saline County neighbor Benton Panthers that has, in recent years, drawn record crowds for high school football games at War Memorial Stadium in Little Rock. The goal is for the 2011 game to draw 30,000 fans. 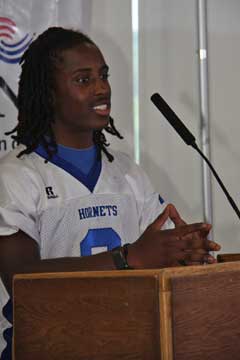 “To come out of the locker room and see fans up to 30,000, it’s crazy,” said Hornets wide receiver Dillon Winfrey. “You want to win but, at the same time, you’re just glad to be there.

“The Bryant Hornets and the Benton Panthers, we’re supposed to be rivals,” he added. “We’re like brothers almost. You hate your brothers deep down inside but you’re supposed to like him.”

The theme of this year’s event — it’s far more than a football game — is “Where Is Your Heartbeat”. It will include a week’s worth of festivities leading up to and then during the football game, which will be played at 7:30 p.m., on Friday, Sept. 2, the opening night of the 2011 season.

Advanced tickets are now on sale and fans are advised to get them in advance. Tickets and t-shirts are on sale for $10 at all central Arkansas locations of Big Red Valero locations. Tickets at the gate will be $8 and t-shirts $15. (Children 5 and under will be admitted free of charge.)

The fan for the air conditioner in the press box at War Memorial was out so, under much-warmer-than-usual conditions, the annual Salt Bowl press conference Friday afternoon wound up being truncated a bit. Statements and interviews were shorter and the video and photo session took less time.

As usual, former State senator Shane Broadway of Bryant served as emcee and gamely got through the itinerary for the event, only wiping the perspiration from his face once or twice.

Both coaches thanked the organizers and sponsors for the event and talked a little about their teams.

“It’s a great venue and we’re excited about playing football,” Calley said. “Dillon Winfrey and Sawyer Nichols are two of the four returning starters we have from last year’s conference championship team. We’re going to be very young, very inexperienced but I’m excited about the opportunity for these guys to get to play in front of 30,000 people.

“We’re going to unveil a somewhat different offense,” he continued. “It’s going to be more pass-happy than in the past. We’ve been a ground team the last three years. We’re going to air it out. I think our guys have taken to it and have enjoyed it a lot more. The tempo of the game is a lot faster. I just hope we’re in shape enough to be able to hang with the Panthers.”

Neathery, in his second season as Panthers’ head coach, said, “It’s really not something that every player in the state of Arkansas gets a chance to do, a game this big, that’s this caliber. It’s really a treat for us, especially for the kids. 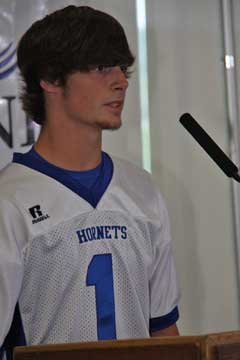 Seriously, he continued, “We are much better than what we were last year. Coming in with a new system, that’s always tough the first year. We came into the game last year a little unprepared. This year, we’ll come in ready to play.

“The one thing that I’m really excited about is the buy-in that our kids have right now, the work they’ve done in the off-season and the whole time, they’ve shown a steady improvement,” Neathery concluded. “It’s a football team that I’m really proud of right now and I think the community, the town of Benton will be proud of when they see them play football.

“This game’s a big deal,” Balisterri said. “It’s not just a big deal for us but it’s a big deal for the community. When we hang out with our friends, people who don’t play football, they always ask, ‘Hey, have we got a chance against Bryant this year?’ It’s a big deal to everybody.”

Davis added, “When you walk out of the locker room, when you come up the tunnel and you look up both sides and you see 10- to 15-thousand people on each side, it’s kind of breath-taking. It gives you butterflies. I mean, it’s not like you’re in a high school game. You’re in War Memorial Stadium and you feel like a big shot. It’s real fun playing but it’s kind of a blur actually. To me, it all seems like a dream.

“I think this year we have a good shot to win it,” he continued. “The team’s work ethic has turned around completely. People care this year. Last year, everybody had bad attitudes and went into every game thinking we were going to lose. This year, a lot of things have changed and we’ve got a shot.”

Though Benton holds a 24-13-1 record in the series, which began in 1974, Bryant has dominated it in recent years. Last season, the Hornets prevailed 45-9. It was their fifth win in a row and 11th in the last 13 meetings, 12 of which were Salt Bowls. The Salt Bowl trophy was introduced to the rivalry originally in 2000 by former Hornet T.J. Sivewright. The event has grown exponentially since then.

“We’ve wanted this to be a community event for the cities of Benton and Bryant,” Broadway noted. “To celebrate the rivalry of the two schools. But also to bring our communities together at a tailgate party and have businesses show off their wares to the people of our community. But also to use this as a way to give back to our community.”

Broadway noted that the charities benefitting from activities surrounding the game are the Arkansas Rice Depot, the American Cancer Society and the American Red Cross.

“Our goal this year is to raise $6,000 and collect 5,000 pounds of peanut butter,” Broadway said regarding the Rice Depot. “Get out your peanut butter and bring that to the game.

“With the American Cancer Society, we’ve been involved with their texting program,” he continued. “Text-to-give in support of cancer research. We’ll be encouraging everyone to do that in the pre-game.”

In regard to the American Red Cross, the goal is to collect 500 units of blood through blood drives at both campuses. One will be at Benton on Tuesday, Aug. 30, from 8 a.m. to 6 p.m. Another will be at Bryant High School from 8 a.m. to 6 p.m., on Wednesday, Aug. 31. All donors will receive a rally towel (supplied by Ink., Inc.) for supporting the respective teams at the game. A trophy will be presented to the winning school.

There will also be a text-to-give program for the Red Cross. and a blood drive will be held at War Memorial the day of the game.

Set up for what has been dubbed “Arkansas’ Largest High School Tailgate Party” the day of the game will begin at 10 a.m. Hot dogs to be given away by the banks and credit unions of Saline County will begin to be cooked by Cajun Eatery around 2 with the tailgate party commencing at 5. Drinks will be supplied by Coca-Cola.

Gates at the stadium open at 6 with pre-game activities at 7 including the texting for the American Cancer Society, the presentation of a vehicle to Rice Depot by Auto Body America, the introduction of Saline County pee-wee football teams and cheer squads, a check presentation by the banks to Rice Depot and a performance by the cheerleaders from each school.

For the coin toss before the game, Everett has donated a commemorative coin. Copies of the official Salt Bowl flip coin will be presented to the seniors on the football and spirit squads as well as the bands.

At halftime, the dance teams and bands from each school will perform. The Chick-fil-A field goal kick for a year’s supply of chicken for one person will be held. (Fans can register to be selected for the contest at the Bryant Chick-fil-A.)

The annual football toss to win a truck from Everett will be held as well. Sign-ups will be held at the tailgate party and three names will be drawn between the first and second quarters to participate in the event. Participants will need to throw a football into the bed of a pick-up truck from three different spots on the field. Women contestants will be throwing from 10 yards away on the left hash, 15 yards away in the middle of the field, and 10 yards away from the right hash within the 24-second time limit. Men will be required to do the same but from 15 yards, 20 yards and 15 yards, respectively.