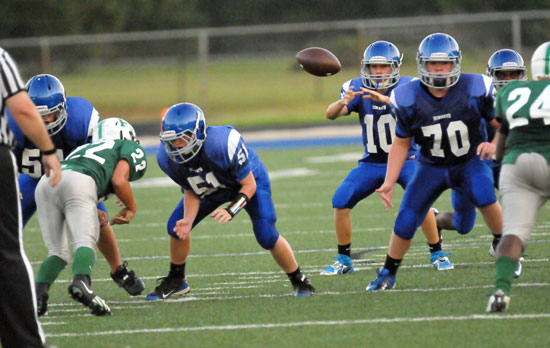 Excruciatingly close. Twice, it looked like the Bryant Blue Hornets eighth grade team of Bethel Middle School might pull out a victory in their season-opener Tuesday night at Bryant Stadium. But the Pulaski Heights Panthers escaped with a 13-12 win on the strength of Henry Fendley’s extra point kick with 2:46 left in the third quarter. 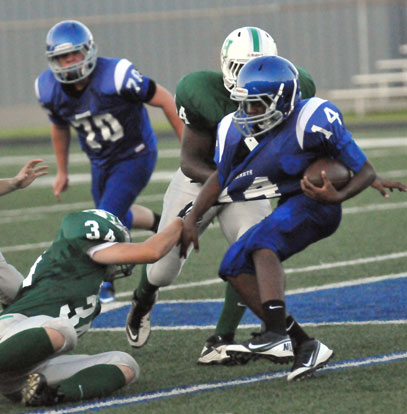 At that point, the Panthers held a 13-6 lead. The two teams exchanged fumbles with Trevon Hadley recovering the Bryant bobble and, two plays later, Jonathan Smith getting on the ball when Pulaski Heights left it on the ground.

Starting from the 36, the Hornets put together a clutch 64-yard drive for a game-tightening score. Quarterback Mike Jones completed a 7-yard pass to Cameron Vail then a 15-yard toss to Jacob Thomason to get the drive going.

On third-and-10 at the Panthers’ 46, Jones had Vail open deep and all the Panther defender could do was interfere to prevent the reception. The penalty moved the ball to the 31 and, on the next play, running back Diante Woodson broke a 26-yard run to the 5.

He scored on the next play.

Down by one, the Hornets went for 2 and appeared to have it when Jones rolled out to his right with a selection of receivers in the right flat. But his pass was just off the fingertips of the out-stretched hands of Parker Littleton and with 5:03 to go, it stayed 13-12.

After recovering an onside kick, Pulaski Heights used its rugged ground game, which featured Hadley (12 carries, 101 yards), to grind to the Bryant 30. On a second-and-5 there with just over two minutes left to play, the Hornets separated the ball from Tyvon Johnson and Kobi Riffe pounced on it to give his team one more chance to win it.

With runs of 8 and 10 yards by Woodson and a pair of short completions from Jones to Vail, the Hornets drove to the Panthers’ 37. With time running out, Jones went back to pass, scrambled away from the rush, reversed fields and took off down the right sideline.

For a moment, it looked like he might score. But the last two Pulaski Heights defenders wrestled him out of bounds at the 18 as time expired.

“We played a very physical, very talented football team,” stated Bryant Blue coach Dale Jones. “It took us a little while to adjust to the speed and the physicality that they were bringing. After that, I thought we played good — not great but good. 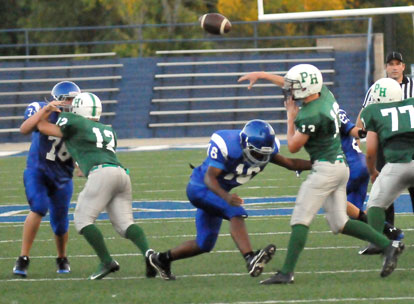 “I was proud of the effort but there’s a lot of things we’ve got to fix,” he continued. “Our pass protection wasn’t where it should be. There were times when we ran the ball pretty well but there were times when we didn’t. We had too many slips, too many people slipping in there on the zone. We’re primarily a zone (blocking) team. There shouldn’t be a lot of people slipping in there in the zone.”

The Hornets actually wound up surpassing the Panthers in offense. Though Pulaski Heights accumulated 168 yards on the ground and just 7 in the air, Bryant Blue finished with 196 yards of offense including 71 on the ground by Woodson and 71 in the air as Jones completed 11 of 17 passes.

“Defensively I thought we played pretty well,” Jones commented. “We gave up one long run in the second half. We had a sub in there when the touchdown came but, other than that, we made them earn their yardage. We did okay.

“Our special teams have got to get better, our kicking game,” he continued. “I wanted to kick some extra points tonight. We’ve been working on it feverishly but I just don’t have confidence — I have plenty of confidence in my kicker (Luke Welch). He’s a great kicker. We need to get it cleaned up up front, the snap, the hold, the blocking up front. Once we get that cleaned up, we’ll kick extra points. I wish we could’ve kicked two of them tonight but I just didn’t have confidence in it. I don’t think we would’ve made them.”

To start the game, Bryant drove for midfield after an onside kick to the Pulaski Heights 15. Jones’ 24-yard keeper put them in position. Moments later, the quarterback had a pass tipped by a defensive lineman. He alertly caught the deflection and scampered for a 10-yard gain to the 15.

A procedure penalty negated Woodson’s run to the 3 and, on the next play, the Panthers forced a fumble that Louis Greene recovered. 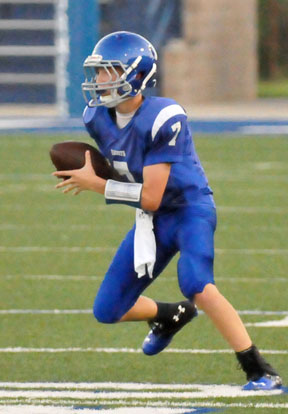 The Bethel defense gave up a first down but then forced a punt, getting the ball back 42 yards away from paydirt. They covered it in nine plays, overcoming a holding penalty along the way. Woodson broke an 11-yard run and caught a pass that would’ve reached the 14 if not for the penalty.

A 7-yard run by Vail off a lateral from Jones then a 9-yard pitch-and-catch between the duo reached the 18. Littleton grabbed a 4-yard toss then Jones kept for 10 yards to set up his 1-yard sneak for the TD.

A pass on the two-point conversion try was off the mark.

Pulaski Heights answered with a 64-yard scoring drive that came mostly on Hadley’s 42-yard scoring run. Fendley’s extra point attempt failed and it was 6-6 with 3:18 left in the first half.

That score held until half.

The Hornets got their first chance of the second half after Joe Wyllia recovered a fumble but they weren’t able to pick up a first down when Jones’ fourth-down pass to Vail came up short.

A play later, Johnson set sail on a 46-yard touchdown run to give Pulaski Heights the lead. Fendley added the all-important extra point to set up the dramatic finish.

The Hornets will return to action on Thursday, Sept. 12, against Cabot North.