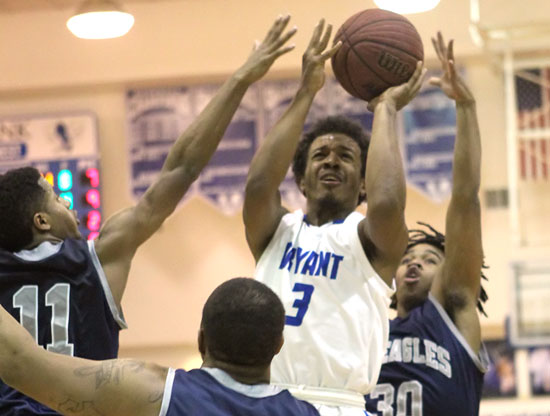 One point will do. 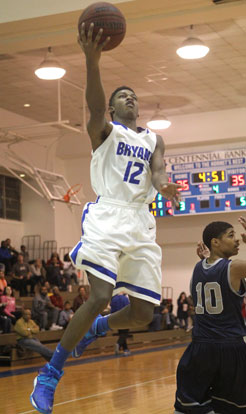 With time running out, Bryant Hornets senior guard C.J. Rainey drove from the top of the key, around a pair of defenders for Little Rock J.A. Fair’s War Eagles down the left side of the lane and straight to the rack, hitting a layup as he was fouled with :06.6 left on the clock.

In a game in which Fair had appeared to snatch away a Bryant victory, Rainey had tied the game and, after a War Eagle timeout, converted a free throw that wound up being the difference in a 44-43 victory

Against a soft press by the Hornets, the War Eagles were unable to get a shot away before the buzzer sounded as Bryant captured its second consecutive one-point win in conference play.

Whereas the Hornets and their fans kind of drew a sigh of relief on Tuesday when Pine Bluff missed three shots at winning the game in the final seconds, this time the students flooded onto the floor to celebrate with their classmates on the team, starting an impromptu dance party.

The win improved the Hornets to 6-8 overall but, more importantly 2-1 in the South Conference going into Tuesday’s trip to Sheridan. The two teams are tied with Lake Hamilton and Benton for the league lead after Friday’s action.

The third time, however, turned out to be the difference maker and the toughest to overcome. A free throw by Hornets sophomore Kevin Hunt had the team up 41-37 but Antonio Pointer hit a 3. Fair got the ball back on an offensive foul that Hornets head coach Mike Abrahamson disputed.

At the other end, however, Bryant forced a turnover. Fair jumped into a press, which resulted in a steal by Pointer. He drove for a layup giving the War Eagles a 42-41 advantage. And, after the shot, Hunt was cited for an intentional foul.

Abrahamson called a timeout, leaving him with only one left. 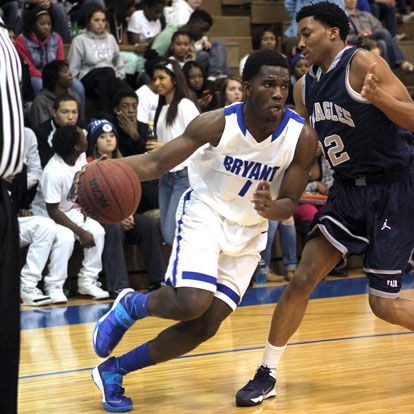 Pointer was to the line to shoot two free throws and the War Eagles would get the ball as well. It was a chance to put the game away with :32.1 left.

“Most people were probably thinking he was going to hit a free throw or two then who knows what they’re going to do when they get it in?” Abrahamson said. “Most people, in that situation would think it is over. But if you think that way, you don’t give yourself a chance. I hope when I said that, it sunk in.”

Sure enough, with the Bryant fans raising the roof, Pointer missed both shots. On the ensuing possession, as soon as Pointer got the ball, Rainey sent him to the foul line again with a one-and-one.

With :26 showing, Pointer managed to convert the front end but, again with the Bryant crowd putting the pressure on, his second shot fell off the rim into the hands of Hornets’ senior Greyson Giles.

“I thought the student section was amazing tonight, really a big part of the victory,” Abrahamson stated. “They made it so loud on those free throws at the end on the intentional foul and then the foul after that as well. They really made this a tough place to play. Tonight and Tuesday against Pine Bluff, I thought it was a tough environment for an opponent to come into.

“A lot of people talk about our gym not being as nice as other people’s gyms or as nice as other people’s gyms but one thing we can do is make it the loudest gym and the toughest place to come play,” the coach added, referring to the facility that was built in 1968. “And our student section and our parents, our fans and our community are doing a good job of making it a tough place to play right now. We appreciate that.”

Giles wound up getting the ball to Hunt, who rushed the ball up-court against the War Eagles press. When he got into the front-court and was just about to be double-teamed, Abrahamson called his last timeout.

“We had a play already called but the play I draw up in that timeout kind of breaks down,” he recalled. “We wanted C.J. to throw it in then cut behind the defense and get it back. That didn’t work but, to our guys’ credit, Cedarrian (Crosby) stayed poised, kept the ball under control. We had enough time. Everybody knows the time situation. C.J. knows enough to keep moving, keep trying to get open, and keep working for it. The other guys know to keep looking for him as long as we’ve got time. And it worked out. He puts his head down and goes left and the rest is history. It was a great finish.

“I’m most proud of them not panicking, showing maturity, showing poise and composure, and showing a belief that somehow we could still pull it off, still win it, when it seemed like everything fell apart in an instant,” the coach stated. “What it might lead to is a confident basketball team that, instead of being dejected for their hard work coming up short, their hard work is paying off.”

Rainey finished with 16 points. Hunt added a season-high 12 with freshman Romen Martin popping for 10 including a pair of clutch 3’s. Crosby finished with 4 points and a team-high in rebounds. Giles had 2 points.

Abrahamson lauded Hunt’s play, saying, “If it didn’t work out the way it did in the end, he still had a great game. He had a turnover and a bad foul at a bad time but, boy, what a great job of attacking the basket, getting to the rim, using his length and his athletic ability. He gave us a lift.

“It’s in there and we know it,” he said. “We know what he’s capable of. I just see him growing in his confidence daily, the way we communicate, the way he listens to what I say. There’s guys on this team — and Kevin’s one of them — that I just literally can see things sinking in and literally see progress on a daily basis.”

Fair gained the upper hand initially. It was just 6-5 at the end of the first quarter but the War Eagles’ Jerrick Cole drained a 3 and hit a jumper in the lane to start the second. The 11-5 advantage was Fair’s largest lead of the night.

“They did not do what we expected them to do defensively,” Abrahamson revealed. “They’re more of a 1-2-2 match-up team. Their match-up was more like a switching man tonight.

“I didn’t think we were being very aggressive in the first quarter offensively and we made an adjustment to just go to a dribble-drive action,” he said. “They were spread out at the top and we were able to get into the middle and make some plays.”

Abrahamson, referring to Fair coach Charlie Johnson, added, “I think that both of us as coaches said that to our teams, after the first quarter, because they came out more aggressive as well.”

Hunt’s driving jumper got the Hornets started on a rally. Rainey followed with a spinning drive to the hoop but was answered by Pointer. Another drive by Rainey cut it to 13-11.

Hunt grabbed an offensive rebound and was fouled. His free throw made it a 1-point game. Collyn Jones hit a reverse layup but free throws by Hunt and Rainey on consecutive trips had Bryant ahead for the first time at 16-15.

Pointer put Fair back on top with a 3 but a driving jumper by Hunt and a last-second triple from Rainey made for a scintillating finish for the Hornets and a 21-18 halftime advantage.

To start the second half, Martin canned his first trey off a dish from fellow freshman Desmond Duckworth. Crosby hit a free throw then Giles converted twice to cap what had been an 11-0 run.

With the Hornets trying to slow down Cole, Fair’s point guard Nick Jones got hot at that point, scoring 9 straight points with a standard three-point play then consecutive treys.

Suddenly the War Eagles were even. And when Pointer hit a pair of free throws out of a Bryant timeout, Fair had pushed ahead 29-27 thanks to an 11-0 spurt.

As was the case all night, however, the Hornets responded. Rainey drove, kicked out to Martin and he buried his second triple. Moments later, Hunt set up in the lane and took a charge, the fourth foul on Jones, who had to come out of the game.

Rainey drove for a bucket and Martin tacked on two free throws, giving the Hornets a 34-29 edge going into the fourth quarter.

Cole found the range again, however, nailing back-to-back 3’s, the second from way downtown. With his team suddenly down, 35-34, Abrahamson took a timeout and the Hornets responded once more.

After misses by both teams, Hunt found a driving lane on the right wing and scored put Bryant back ahead, 36-35. Crosby canned a driving shot and, after Jones missed a 3, Hunt took it to the rack again, making it 40-35 with just over four minutes to go.

That’s when the War Eagles started the burst that put them in position to win. It was was an 8-1 run before Rainey’s game-winning play at the end.