Both Murdock and Wilson were running for the Blue team but the Red team bunched together to take top team honors, garnering Sonic gift cards.

Murdock covered the two-mile course in 12:38. Red teamer Caitlyn Bell was second at 12:56. Hunter Delaney of the White team was third in 13:43 with Wilson fourth at 13:44. Talyn Billins rounded out the top five, running a 13:50 for the White team.

“I was pleased with our overall performances especially in the severe heat,” stated Lady Hornets coach Danny Westbrook. “Our senior girls had a 1:12 second gap from first to fifth so that was impressive, but we were only racing two miles not 5K.

“Melinda Murdock’s 12:38 is a very good two-mile time,” he added. “I think she is right on track for a great season.

The Red team finished with 134 points. The Blue team had 159 points and the White team 177. For this competition, the scores of the top 10 runners from each team were tabulated for the team scores.

The Lady Hornets officially open the 2013 season on Saturday, Sept. 7 at the Ouachita Baptist University Invitational in Arkadelphia.

Here are the complete results: 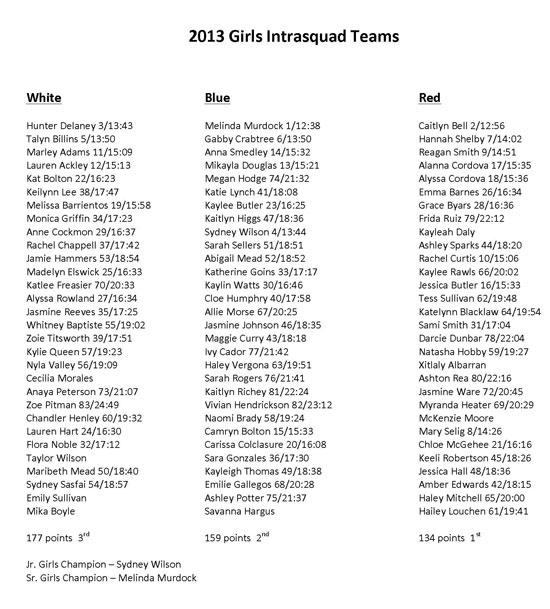