The Bryant cross country program kicked off the 2013 season with the annual Intrasquad competition on Tuesday at Bishop Park.  All runners in grades 7-12 were divided in to three teams and then ran the same 2 mile race course.  For the second year in a row, sophomore Charlie Terry brought home the individual title in a time of 10:38.  Sophomore Ben Majors earned runner-up honors in a personal record time of 10:57.

Eighth grader Shannon Zamora won the junior high division in a time of 11:50, which was good enough for sixth place overall.

In the team competition, the Blue team won in a close battle with the White team, 141-147.  The Red team placed third with a total of 181 points.  For this competition, the scores of the top 10 runners from each team were tabulated for the team scores.  The winning team in both the boys and girls competition won coupons for free hamburgers from Sonic on Reynolds Road.

“I was very pleased with how all of the boys competed.  The group up at the front got out to a blazing fast start and did a good job of hanging in there in the second half of the race, especially given how hot it was.  Charlie Terry and Ben Majors both had great races, but it was nice seeing some of our newcomers get out there and mix it up.  Sophomores Derek Vos (8th in 11:52) and Justice Pryor (10th in 11:57) are both new to the program and were not afraid to mix it up at the front.  Also, I thought Nathan Stewart (5th in 11:45) ran a gutsy race.” Coach Steve Oury

“Overall, we are ahead of where we were at this time last year.  We had 35 boys break the 13 minute barrier, which is almost twice as many as we had last year.  That is a tribute to the hard work that our middle school coaches, Deanna Porter and Kayla White, are putting in with the kids.  Based on what we saw in this race, I think this should be a fun year for Bryant cross country.”

Here are the complete results: 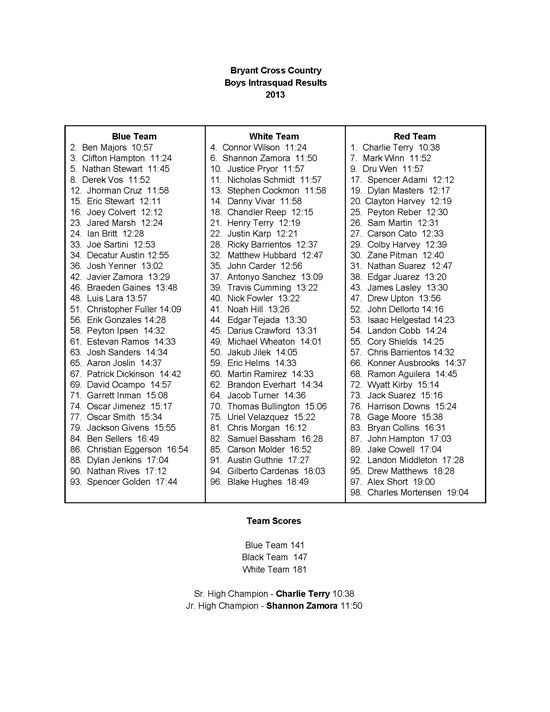