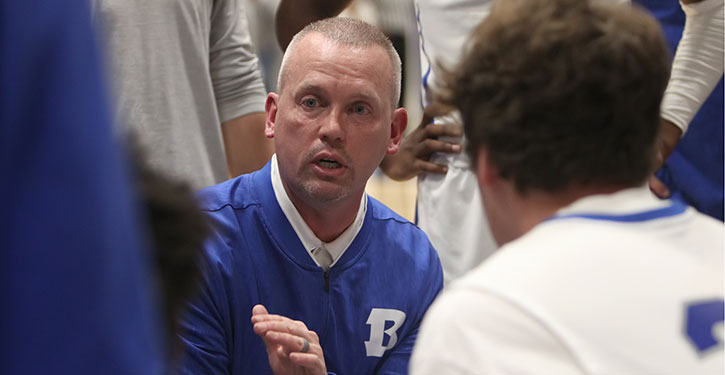 Releford sparks Grizzlies as they hold off Hornets

The Bryant Hornets and the Fort Smith Northside Grizzlies each started Friday night’s 6A-Central Conference opener at the Hornets’ Nest with a star guard on the bench. But, while Bryant’s Khalen Robinson stayed on the bench in street clothes nursing an ankle injury the entire game, Northside’s Javion Releford entered at halftime after serving disciplinary measures for a half.

Scoring 12 points including 8 of 10 free throws, Releford sparked his team to a bitterly-contested 47-42 win as the Grizzlies avenged a 50-48 loss to the Hornets just a week before in the semifinals of Fort Smith’s Coke Classic holiday tournament.

Sophomore Camren Hunter stepped up to take up the scoring slack for Robinson with 17 points but no one else had more than A.J. Jenkins’ 8.

And, at key moments in the third quarter, individual Hornets were hit with technical fouls that Releford turned into 3 crucial points.

Determined to play well after fouling out of their previous battle, Northside’s 6-10 junior Jaylin Williams scored 13 points and gathered 11 rebounds. This time he stayed in the game despite picking up four personal fouls and getting by with some taunting of the Hornets without being T’d up, much to the chagrin of the Bryant players.

But it fired up the big Bryant crowd and spurred the Hornets to a 38-37 lead with 3:39 left to play.

“You know I thought our kids really competed hard,” Abrahamson allowed. “Sometimes, in competing hard, they made it about themselves, about an individual, instead of about the team. And we crossed the line a couple of times and got a couple of technical fouls out of frustration and out of, maybe, making it a personal battle, more important than a team battle.

“Our youth showed in the sense too that they thought they were being treated a little unfairly by some of the things Northside did that they thought should have been technical fouls and weren’t,” the coach continued. “Then, when we do something, and it is a technical foul — what we have to do is control what we can control. We can’t put it in the referee’s hands, that we don’t have our moments that are technical fouls. That’s all we can do. It’s just youth and undisciplined but I think some of it is just not knowing how to harness the competitiveness.

“We had a good crowd tonight,” he emphasized. “There was no school, but we had a good crowd. I want to thank all the fans who came out, all of our alumni that came out, our students came out. I think a lot of the players on our team maybe haven’t played in that environment at home and it got them amped up and maybe that — we just didn’t handle it well sometimes.

“But, at the same time, for the large majority of the 32 minutes, our kids really competed,” Abrahamson emphasized. “We really struggled putting the ball in the basket.”

Neither team shot particularly well. The difference came at the free-throw line. The Griz were 17 of 29 at the stripe including 13 of 22 in the second half. Meanwhile the Hornets, playing at home, went 9 of 14 overall and just 3 of 4 in the second half.

The charged-up Grizzlies scored the game’s first 11 points, so the Hornets were in a hole right away. After a timeout by Abrahamson, they got going. Sophomore Aiden Adams gave them a spark off the bench with a 3-pointer that provided the first scoring of the game for the Hornets.

Hunter made a pair of free throws then swiped the ball and drove for a layup to make it 11-7 going into the second quarter.

Bryant extended that run. With the last 7 points of the first quarter, the Hornets pushed it to a 16-2 barrage that had them leading by 3 by the 4:57 mark of the second quarter.

Treylon Payne had all 6 of his points during the run. With Northside playing him tightly on defense, Payne wasn’t able to get a 3-pointer to drop so he started driving past the defender and hitting pull-up jumpers.

Adams added a free throw then Hunter fed Catrell Wallace for a basket and Bryant had its first lead, 14-13. Payne made a steal, but Jenkins was unable to convert a pair of free throws. Still Hunter drove for a basket off a Northside miss to extend the lead to 3.

By then, both Williams and 6’6” counterpart Braylin McKinley were on the bench in foul trouble. Unfortunately, the Hornets weren’t able to take full advantage of that, though they still led at the half, 21-19.

Northside led 27-25 when the first technical was called. Payne drove the right side of the lane and had the ball stripped out of his hands and out of bounds. No foul was called, and he apparently said something.

Releford went to the line and made it 29-25, the Grizzlies’ first two-possession lead since early in the second quarter.

On the subsequent possession, Travis scored. After a Bryant miss, Williams hit two free throws to increase the Northside lead to 33-25.

Hunter’s three-point play stemmed the tide for the Hornets and forced McKinley from the game with his fourth foul.

A free throw by Williams made it 34-27 then, with the quarter in its final seconds, Wallace blocked a shot by Williams and there was a scramble for possession. In the process, Hunter was hit with a technical with :01.3 left in the quarter. Noah Gordon and Releford each hit 1 of 2 free throws to make it a 9-point game going into the final period.

Jenkins took a charge to get the Hornets possession early in the quarter. He cashed it in with a 3 from the corner off a kick-out assist from Hunter. After Releford hit a free throw, Hunter found Wallace for a bucket to trim the lead further.

Wallace then absorbed a charge as Williams picked up his third foul. Though the Hornets were unable to take advantage immediately, Jenkins again found the range from the left corner and, suddenly, the Hornets were down just 37-35.

With the fans coming to their feet, Lambert drove for the basket and the go-ahead three-point play as Williams picked up his fourth.

Moments later, Williams hit a free throw to tie it then took a charge as Lambert tried to drive the baseline and force that fifth foul on Northside’s big man.

At the other end, the Grizzlies, who had converted just 1 of 13 from the 3-point arc to that point, got one to fall as Gordon put his team back on top.

After a Bryant timeout, Releford hit a driving jumper. Northside forced a held ball to gain control with a 43-38 lead and under a minute to play.

But Hunter made a steal and layup to make it 43-40. Releford added another pair of free throws and, in turn, the Hornets got to the line only to come up empty.

Williams kept the Hornet’s fading hopes alive by missing two free throws then goal-tending a shot by Hunter. But just :05.7 remained and, with four seconds remaining, Releford sealed the win at the line.

The Hornets, now 9-4 overall and 0-1 in league play, will try to get that first conference win on Tuesday at Little Rock Catholic.