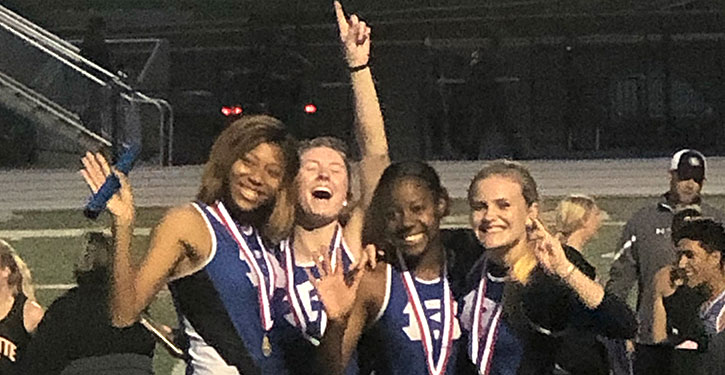 PEARCY — Ella Reynolds won the individual 400-meter run then added a leg to the Bryant Lady Hornets’ winning effort in the 4×400 relay to provide highlights for Bryant at the annual Meet of Champs at Lake Hamilton High School on Saturday.

Hall then ran the lead leg and Reynolds the anchor in the winning effort in the 4×400, joining Megan Lee and Amya Smith on the 4:03.07 clocking that narrowly defeated Fayetteville (4:04.11) as the same two teams finished 1-2 that had in the State meet.

Deborah Shaw scored in two events at the meet. She was fourth in the 100-meter hurdles with a time of 15.33, improving her time of 15.50 which garnered second at the State meet and the 15.88 she ran to win the conference title.

The 4×100 relay team of Jaiyah Jackson, Mallorie Scott-Smith and freshmen V’Mia Palmer and Parris Atkins combined on a 49.34 to place third behind Sylvan Hills (48.41) and Little Rock Central (48.66).

Smith. Contributed an eighth-place finish to the scoring with a 12.58 in the 100-meter dash.

The Lady Hornets finished with 40 points to finish third in the team standings. Bentonville won with 59 points edging Sylvan Hills with 58 in the 50-team field.