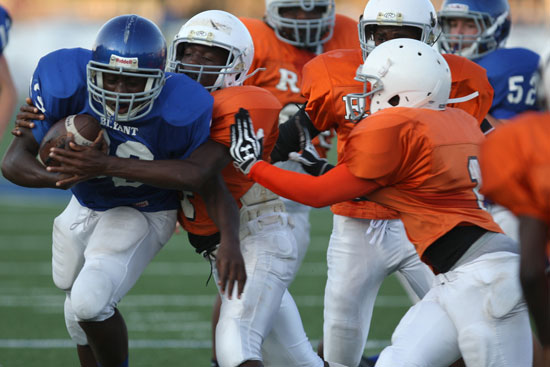 Some seasons, sometimes, a team can feel like every break is going against them. The Bryant White[more] Hornets eighth grade team of Bryant Middle School must feel that way lately. 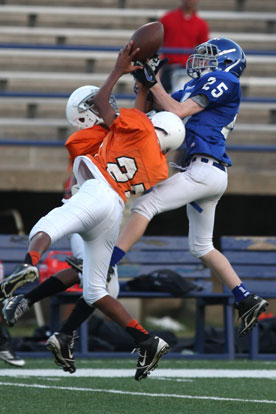 A week ago, the team was set to play at Conway White when a thunderstorm rolled through Conway with lightning erupting across the skies incessantly. The game was postponed just minutes before things lightened up for the freshman game to be played.

So the team made a return trip to Conway on Monday and roared to a 24-0 lead by halftime only to have the Wampus Kittens rally to hand them a heartbreaking 25-24 loss.

Fast forward to last night when Bryant White hosted the Ridge Road Rams of North Little Rock. The Hornets fell behind on the opening possession of the game but then held down the Rams. On both of their first-half series on offense, Bryant White drove into Ridge Road territory only to have turnovers undermine their efforts including a fumble a yard away from the end zone.

The Hornets got new life when Jake East returned the second half kickoff 84 yards for a touchdown to tie the game.

And it looked like it might end 6-6 when, with time running out, the Rams faced a fourth-and-11 predicament at the Bryant White 19. A juggling catch by the Rams’ Ricky Cole of a desperation pass from quarterback Antonio Reed got the ball to the Bryant 1.

A procedure penalty moved the Rams back to the 6, giving the Hornets hopes of a last-second stand. On the next snap, Rams running back Keon Burton appeared to be caught in the backfield but, somehow he got loose and skirted around left end, out-sprinting the Bryant White defense to the corner for a go-ahead touchdown with just :29 showing on the clock.

On the ensuing kickoff, a Ridge Road penalty actually hurt the Hornets. An onside kick was covered by Bryant near midfield but the Rams were cited for being offsides and the play was nullified, they were moved back 5 yards and wound up kicking off normally. Bryant’s Cameron Coleman returned to the 39, 11 yards short of where they might’ve had it.

With :24 left, the Hornets had time for a pair of plays and used the same one both times. Quarterback Beau Bonvillain threw a lateral to wideout Austin Kelly who tried to heave a long pass down the right sideline. The first attempt was sniffed out by the Rams who hit his arm before he could get a throw away to a teammate that was open deep. 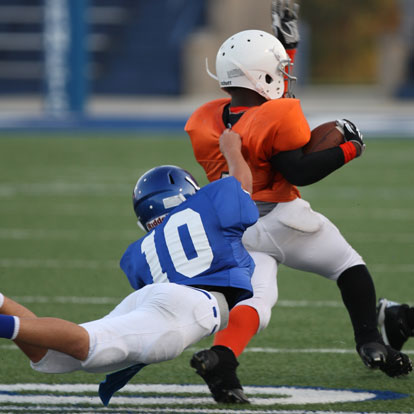 The ball fell harmlessly to the turf.

The Hornets tried the same play again and this time Kelly hauled off and launched a long throw only to have Ridge Road’s Bryalon Johnson intercept with :01 showing on the clock.

Bryant White fell to 2-3 on the season with a home game against Mabelvale scheduled for Tuesday, Oct. 9.

Against Ridge Road, the Hornets were limited to 25 yards rushing but Bonvillain completed 5 of 10 passes for 119 yards. Jesse Smith caught three of those for 85 yards while East grabbed two for 34.

But the Hornets were plagued by turnovers, suffering five of them including three interceptions.

The Rams suffered one turnover, an interception by East inside the Bryant 10. They rushed for 109 yards and threw for 47 more.

The Hornets, sparked by a couple of solid runs by De’Amonte Terry and Bonvillain’s 18-yard pass to East and 17-yard throw to Smith, drove to the Ridge Road 26. But, on a deep pass on first down there, Reed intercepted for the Rams at the 3.

With Hayden Knowles and Kelly making stops for no gain, the Rams were stifled, going three-and-out. A punt by Burton rolled dead at the Bryant 48 and the Hornets had the field position to make a bid at an answering score. 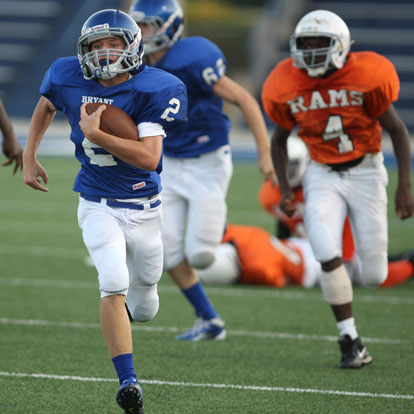 The drive didn’t start out well. A bad snap forced Bonvillain to fall on the ball back at the 33. A play later, his pass to East made up 16 yards to set up a fourth-and-7 at the Rams’ 49. On a leaping catch in traffic by Smith, the Hornets picked up the first down and more. The 35-yard completion reached the 14.

From there, Coleman powered to the 7. On second down there, Coleman got the call again and bashed to the lip of the goal line. In his effort to get the final yard, the ball came loose and Ridge Road recovered.

Using their timeouts, the Hornets forced a three-and-out and nearly got a safety when Hastings dropped running back Osha Holiman at the goal line. Coleman and Chase Fox stopped the third-down play and Burton dropped back into his own end zone to punt it away with :48 left.

The Rams had had trouble with the snaps. They were slow and high. So they took a chance for the block. Burton got the kick away and it only went 17 yards. Though it was muffed initially, Coleman fell on the ball just 10 yards away from paydirt. But the Hornets were flagged for roughing the kicker and the North Little Rock team retained possession. Two snaps used up the rest of the time in the first half.

But Bryant White snapped up the momentum to start the second half when East dashed the distance for the touchdown on the kickoff. A try for two failed, however, and the game remained tied.

The Rams threatened on their subsequent possession but a bad snap undermined the drive, which had reached the 7. They tried a lateral pass only to have the lateral pass from Reed skip out of bounds for a loss back to the 22. They tried the same play again but the Hornets covered the receivers and Burton could only take off after catching the lateral. Kelly stopped him at the 18.

The Hornets picked up a first down but then had to punt after Bonvillain was sacked. Fox set up to punt but his kick hit one of his up-backs and the Rams covered the loose ball at the 22 with 6:50 left in the game.

Two plays later, however, East intercepted Reed’s pass at the 6.

Sparked by a 33-yard completion from Bonvillain to Smith, who made another leaping catch in a crowd, the Hornets made a bid to take the lead. But a third-down pass was intercepted by Holiman with 2:52 left to play.

The Rams drove to the 19 and, down to their last gasp, got the completion that set up the winning score.