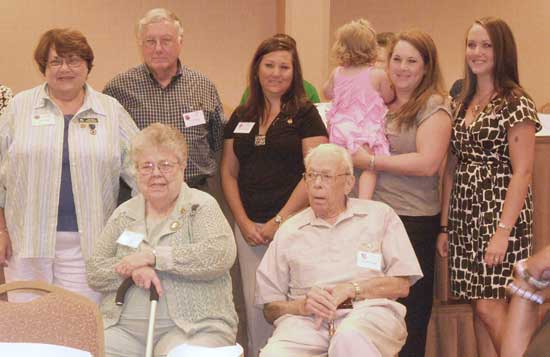 LITTLE ROCK – Girl Scouts – Diamonds of Arkansas, Oklahoma and Texas held their third annual[more] Inclusion Celebration in Little Rock on Saturday July 16, where they were joined by over 300 girls, volunteers and staff.

A highlight of the event was the recognition of a long-serving Girl Scout family.

“The Yarberry/Bragg family has been involved and dedicated to Girl Scouts for many decades,” said Amanda Loggins of the Girls Scouts – Dimaonds. “320 years of their collective Girl Scout membership was recognized. Service pins were presented to each member of this devoted family.

“Denise Stewart, CEO; announced that the Girl Scouts – Diamonds of Arkansas, Oklahoma and Texas has established a Second Century Endowment Fund to commemorate the 100th Anniversary of Girl Scouting,” Loggins continued. “Lifetime members Sally and Randle Yarberry made the surprise announcement that they have given the lead gift for the Second Century Endowment in honor of their daughter, Linda Ann Yarberry Bragg who has followed in their footsteps of service and loyalty to Girl Scouting and family.”

Linda Ann Bragg currently serves as Secretary on the Board of Directors for Girl Scouts – Diamonds of Arkansas, Oklahoma and Texas.

“Girls and volunteers participated in a variety of enrichment programs,” said Loggins. “Training incorporated teambuilding classes and interactive activities. Girls and adults of all ages learned tips and useful skills that will benefit their troops including financial responsibility, using the power of technology, and stress management.”

To demonstrate teambuilding capabilities of technology, girls and volunteers raced in teams through a fast-paced texting- scavenger hunt while learning fun facts of the 100 year history and background of Girl Scouting.

Plans were unveiled to celebrate the upcoming Girl Scout Centennial that begins in 2012. Attendees also viewed a preview of the Diamonds council Oral History video project showcasing personal stories of alumnae from the past 100 years.

Keynote speaker was Judy R. McReynolds, President and CEO of Arkansas Best Corporation, headquartered in Fort Smith. Her message emphasized the importance of leadership development in girls and adults. McReynolds spoke about the significance of developing the personal skills of confidence and courage early in life and the necessity of having good mentors as she shared her journey to becoming the first female CEO of a publicly traded company in Arkansas. She encouraged the audience to move toward their dreams with determination and a strong work ethic so that they can achieve their goals and become positive, influential figures in today’s society.

Girl Scouts – Diamonds of Arkansas, Oklahoma and Texas serves close to 18,000 members and encompasses all counties in Arkansas except Crittenden, includes Adair, LeFlore and Sequoyah counties in Oklahoma as well as Bowie and Cass counties in Texas. Girl Scouts builds girls of courage, confidence and character, who make the world a better place.