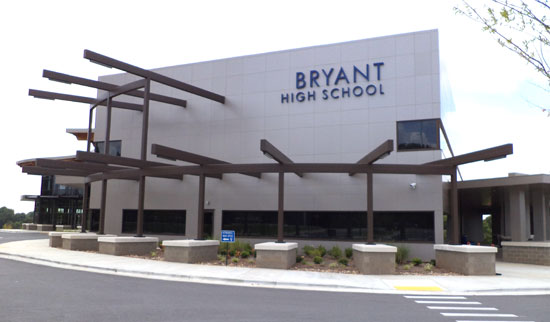 By Jamie Miller
The Bryant School District is moving from the grade book that has been used since 2005, Global Scholar, to the free statewide grade book eSchool, it was announced at the regularly scheduled August meeting. The contract, which is currently in place through Global Scholar, is for a three-year term.

The board agreed to lower the term of the contract to one year concluding at the end of the 2013-14 school year.

Technology administrator Mark McDougal explained that this is a good move for the district not only because it is a free system but because there will be a large network of schools using the system and that will be beneficial for tech support.

The board approved moving from a private firm audit to a Legislative Audit. Superintendent Randy Rutherford explained that he felt now was the time to make the change to the state-provided service with all of the cuts in federal funding. The private audit costs the district roughly $15,000 every time it is done. The board approved the change.

Rutherford reported that the first day of school was a success with the district growing by 114 students over last year.

It was also announced that the district has a new app for smart phones that offers a variety of information regarding classroom assignments, notifications, grades, school closings, etc. The addition is for the convenience of parents and staff so they’ll have information at their fingertips. The Bryant Public School app can be downloaded for free from any app store.

Mike Lee was recognized for being voted the 2012-13 Class 7A Athletic Director of the Year. He was chosen by his peers to receive the award.

Saline County and the State of Arkansas has adopted the “Flashing Red, Kids Ahead,” campaign to help advocate for school bus safety. According to statistics, each school day, over 1,000 Arkansas drivers illegally pass school buses. Everett Buick GMC of Bryant produced shirts to support the campaign as well as a commercial to help raise awareness of the laws and safe practices for when approaching a school bus.