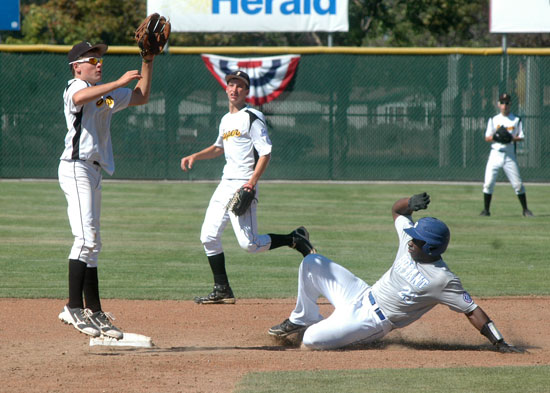 MOSES LAKE, Wash. — Garrett Misenheimer continued his hot hitting, going 4 for 4, Cameron Coleman had three hits and Alex Shurtleff fired a two-hitter, striking out 10, as the Bryant All-Stars improved to 2-1 in pool play at the 14-year-old Babe Ruth World Series on Monday afternoon. Bryant broke out to a 5-0 lead in the first inning and rolled to a 10-2 win over Jasper, Ind. 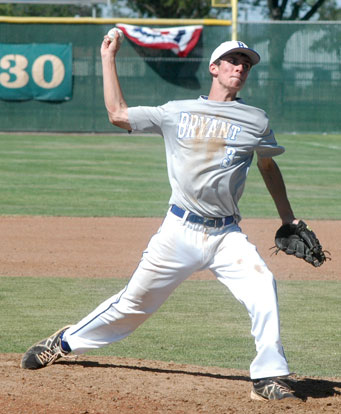 Alex Shurtleff struck out 10 on his way to a complete-game victory Monday. (Photo by Steven Smith/Hometown Sports)

Misenheimer drove in three runs in the game. Coleman went 3 for 3 with a triple, while Shurtleff and Hurt added two hits each.

On the mound, Shurtleff went the distance without giving up a walk though he hit five batters while recording his 10 strikeouts. He took a no-hitter into the fifth. Both Indiana runs were unearned.

Bryant’s opening salvo was instigated by East, who beat out an infield hit. With one out, he stole second ahead of Shurtleff’s single. Misenheimer cracked a double to right to chase both home. Hurt’s line drive single to left knocked in the third run and, after Kelly was hit by a pitch and Hastings walked to load the bases, Allen slapped a single to right to make it 4-0. Coleman walked on four pitches to pick up an RBI.

As he had in the first inning, Shurtleff hit a pair of batters in the second but got out of the jam unscathed. He worked a 1-2-3 third and Bryant revved up the offense again in the bottom of the frame.

Allen was hit by a pitch with one down then Coleman smacked a single off the pitcher. After stealing third, Allen scored on a wild pitch as Coleman moved up the second.

A walk to East was followed by Orender’s groundout, which moved runners to second and third. Shurtleff reached on an error as Coleman scored then Misenheimer grounded a single into left to make it 8-0.

Jasper used a pair of Bryant errors to get on the board in the top of the fourth. Adam Hedinger knocked in the second run with a double. But Shurtleff struck out Ethan Schroder and induced infield grounders by Andrew Hochgesang and Cameron Heeke to keep it 8-2.
Bryant tacked on a run in the fourth when Cameron singled, East walked and a pitch got away from the Indiana catcher allowing both runners to move up two bases.

Jasper broke up Shurtleff’s no-hit bid with a two-out single by Egbert in the top of the fifth. Schmitt’s infield hit followed. After that, however, the Bryant hurler retired seven of the last eight batters of the game.

East scored the final run of the game in the bottom of the sixth. Coleman had ripped his triple with one out but was thrown out at the plate on East’s grounder to third. East hustled to second on the play then dashed home on Orender’s base hit. 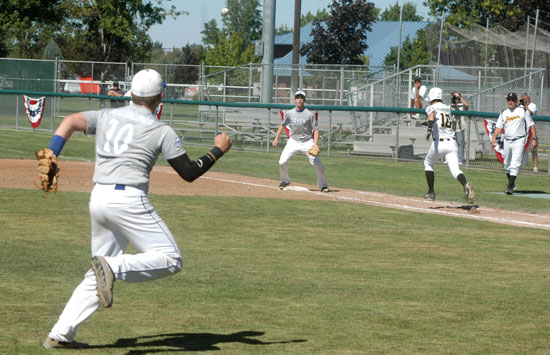