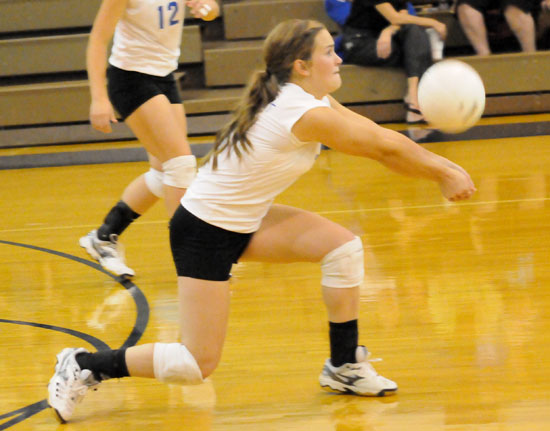 On Saturday, Aug. 24, the volleyball program in Bryant schools will be fully on display at a fittingly named “Showcase” at the Bryant Middle School gym. Teams from seventh grade at Bryant and Bethel middle schools up to the Lady Hornets’ varsity will be taking part, “showcasing” the entire program.

“It’s definitely gotten bigger than it used to be,” acknowledged high school coach Beth Solomon whose Lady Hornets come into the 2013 season off of three straight State tournament bids and, last year, its first (at least since the 1980’s) conference championship with an unbeaten run through the 7A/6A-South.

It’s a testament to the burgeoning program that, despite the fact that the group that played such a key role in that three-year run has graduated, expectations remain high for 2013. The team was set to open the season on Tuesday, Aug. 20, at Arkansas Baptist High School.

“We’re going to be young this year,” Solomon acknowledged. “I don’t have any seniors, which is exciting, especially for years to come. We’ll still definitely be competitive and we’ll be successful but we’re kind of starting from scratch.”

The team includes seven juniors and 10 sophomores. Defensive specialist Abby Staton is the most experienced of the juniors who also include Mariah Aguilar,

“We had a good summer,” Solomon related. “We did the Rogers Heritage camp that we went to last year and we also did the Benton camp, a team camp that was new this year. And I feel like it helped. It took a little bit to get used to that higher rhythm for some of the girls but, overall, we had a good summer. They’ve improved a lot from point A to where we are now.

“One of the big things that we’ve really been focused on is our serve-receive,” she said when asked where the team has improved. “We’ll continue to focus on that and our blocking, just getting them to that higher rhythm. There’s a big difference between freshman and JV volleyball and varsity volleyball. Getting them used to the higher rhythm of play that you have whenever you’re playing against varsity teams — from the time summer started, when we were still kind of slow, to now where they adjust much quicker. It’s a quicker game if somebody’s running a quick set across the court or something like that.”

Solomon took the team’s lack of experience into consideration when setting the schedule. (For the complete schedule, go here.)

“We’ve kind of set it up to where we’ll build up to when we start playing conference,” she said. “This is only Arkansas Baptist’s second year to have a program so I’m not sure how much I’ll play my varsity girls. The big thing for me is that the girls are ready to start playing. We’re ready to get into some competition, not camp mode. I really want to see them play consistently, to get on a roll and be able to stick with it, not get two good points then give up three.

“We don’t have our line-up set 100 percent,” the coach mentioned, “but Britney Sahlmann is going to come in and set for us as a sophomore. That’s pretty much already a given. I’ve got several sophomores on the floor with some switching around. Kendall Selig will be one of our middles. Mercedes Dillard is looking like she’s going to be our other middle.

“Our juniors have really worked hard, doing club ball and then over the summer,” she continued. “They’ve gotten themselves better. Nikki Clay, who has always been a back-row player for us, is playing some front row now. Allie Anderson is going to be one of our key front row players. She sees the court very well for a sophomore and knows how to react, when to time a block, that kind of thing. As a matter of fact, she got several compliments when we were at that Rogers camp from other coaches just because of how young she is.”

Regarding the back row, Solomon said, “I’ve got several sophomores and juniors that are probably going to step up and be back-row players. Shayla McKissock, Whitney Brown and Abby will be key back-row players. Abby may help to set some too.

“This will probably be a year when I’ve got a really strong bench to go to if I need to,” she mentioned. “And I don’t feel like I’ve had that — this strong of a bench — in years past.”