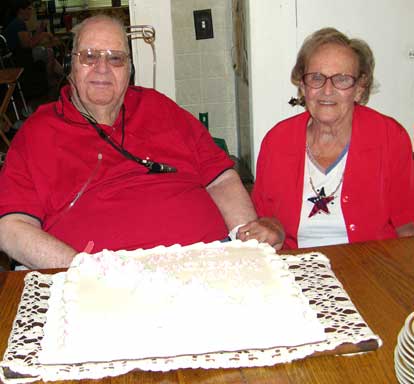 June 17th was a day of celebration for Walter and Irene Schrader of Bryant.

Sixty-five years ago, the Schraders said their marriage vows and promised a life-long partnership to each other. For better or worse, the two have lived in harmony for six and half decades.

Walter is a 100 percent disabled war veteran and stays at the North Little Rock Veterans Hospital most of the time, but on his anniversary, he was brought to his celebration on Springhill Road.[more]

Irene attended Bryant High School and, together with Walter, had seven children who all graduated from Bryant, as well. Most of their children and their spouses went on to be teachers who work in the Bryant School District.

The Schraders have 18 grandchildren and most of them went to Bryant, including former Bryant Hornet quarterback Matt Schrader. They are blessed with 12 great-grandchildren and some of them are currently in the school district, too.

Congratulations are in order to the Schraders, who have accomplished an amazing life-long dream of being together for now more than 65 years.